Students work in a computer class in late April at Loreto Girls Secondary School in Rumbek, South Sudan. The school brings girls from throughout this ethnically diverse country to study and learn together. (CNS photo/Paul Jeffrey)

RUMBEK, South Sudan (CNS) — In a country wracked by civil war and ethnic strife, Irish nuns have created a unique space where young women can dream of a better future and begin to acquire the skills that will help them construct it.

Opened in 2008 by the Irish Loreto Sisters, the Loreto Girls Secondary School brings girls from throughout this ethnically diverse country to study and learn together.

A Mennonite volunteer from the United States told Catholic News Service it is a unique environment in a land torn by civil war since 2013.

“The school is an oasis in a country overcome by violence. One of the first casualties of trauma is imagination; you become incapable of imagining a future that’s better or different. These girls want to become engineers and teachers and doctors and lawyers, and they can hold fast to those dreams because the school gives them the space to dream,” said Nicky Hess, an emergency room nurse from Lancaster, Pennsylvania, who helps run the school’s clinic.

She said the school offers the girls something rare here: an opportunity to just be kids.

“I play basketball with them, something that people do all over the world. But too many children here are rushed to mature, and they have to care for their younger siblings at such a young age. It’s refreshing to see kids just be able to play and have fun without having to be responsible all the time. That’s a part of childhood that everyone deserves.”

When the school opened in 2008 with 35 students, Loreto Sister Orla Treacy — who had spent two years learning to speak Dinka — became its principal. 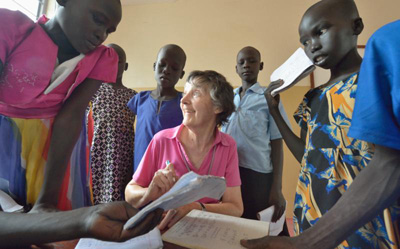 Today, the four-year boarding school has 251 girls. Students come from throughout South Sudan. In a country where tribal identity has fueled violence, inside the school the girls teach each other their tribal dances. And they speak English, the official language, which puts everyone on common footing.

“While the girls’ clans and tribes may be fighting with each other outside, inside the school the girls live in peace and harmony,” Sister Treacy told CNS.

She said harmony is nurtured by a system in which first-year students are considered daughters, second-year students mothers, third-year students grandmothers, and fourth-year girls are called great-grandmothers. There are 10 “families” in the school, each one mixing girls from different tribes.

“They learn to live with each other, learn from each other, and initiate each other into school life. The older ones advise the younger ones on all the normal challenges girls face,” Sister Treacy said.

The system is designed for girls with no suitable role models at home.

“My mother advised me about school, and the women in my family could advise me about education. Or perhaps they didn’t have to advise me because I just saw them do it before me. But in our case here, these girls are the first in their families to complete secondary education. So they don’t have an elder role model in their family to advise them. The family system in the school gives them that nurture they might not get at home,” Sister Treacy said.

In a country where most girls fetch a bride price of several dozen cows, most of the students face strong pressure to get married.

“Whenever you go home for holiday, your family members ask when you’re going to be finished with school,” said Martha Athiei, 20, the school’s head girl. “They want cows. ‘We are suffering and it’s because you are at school,’ they say. Sometimes they call us old women, even though we’re young. … But we believe we have a better future if we stay in school.”

Athiei wants to be an accountant. “I want to help the government and our people understand the importance of having financial knowledge, because there’s a lot of corruption. The people in charge only employ their family members instead of (employing) a person who is capable. I want to do my university in Kenya, then come back here and help my people,” she said.

The school has experienced a kind of mission creep over the years, Sister Treacy said.

“The local chief told us at the beginning that there was also need for a primary school and a clinic, but we didn’t have that capability at first,” Sister Treacy said. “And while we were serving the needs of girls nationally, many girls just outside the gate of the school were not even going to primary school. Same with the boys. And there was some tension in the community that donated the land because their own children weren’t being given a chance.”

When Sister Treacy hired a man to teach the school’s workers English, he asked if he could start a kindergarten for their small children. That opened in 2010, with the children meeting under a tree, and in succeeding years it has become a full-blown primary school with 600 children in the morning. An accelerated learning program for 300 older children meets in the afternoons. Another Loreto sister came to be the primary school principal, and most classes have moved from under the trees into newly completed classrooms on the burgeoning campus.

But even that wasn’t enough. “When the primary school was open the chief started banging on the door asking when we were going to open a clinic. We explained that we were primarily a teaching congregation, but then God blessed us with a sister from Kenya who’s a nurse with experience in community health. So we started a clinic,” Sister Treacy said, noting that the clinic also provides supplemental feeding for malnourished children and mothers from the area. “We never sat down and said, ‘Today we’ll do this and tomorrow do that.’ Things just developed. God provided.”

A more pressing need, however, is a boys’ secondary school. “We have 13 boys graduating from primary this year, and the nearest school for them is 8 kilometers (5 miles) away. In a few years we’ll have 50-60 boys graduating every year. The chief has given land for a boys school, and we’re actively looking for a congregation that wants to come to South Sudan and start a secondary school for boys,” Sister Treacy said.

Opening a boys school won’t be easy, however. South Sudan is a country at war. The school is reluctantly building a wall around its campus, employing local women to make the bricks and local men to lay them. A third of the secondary students are now unable to travel home at the end of terms, because there’s fighting in their communities or their families are displaced. And Sister Treacy said it is hard at times to get enough food for the school, as displaced farmers are not planting crops, and trucks that can bring food from neighboring areas have to run a gauntlet of armed militias. Prices for food, when it’s available, have skyrocketed.

A boys’ school might face less cultural challenges, however.

“When you do girl education in a country like this, everything you do is subversive,” Sister Treacy said. “Girls simply don’t get educated here. Fifty percent of girls are married before they’re 18, and here we are knocking on the doors of families telling them to send us their daughters to get educated. There are a lot of people who aren’t happy with what we do.”

NEXT: Dozens of priests resign from Indonesian diocese to protest bishop