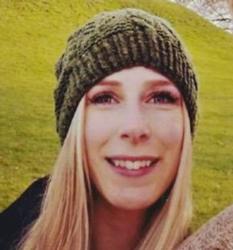 Christine Archibald, a 30-year-old Canadian who was one of eight victims killed in the June 3 London Bridge attack, is pictured in an undated handout photo. (CNS photo/London police handout)

TORONTO (CNS) — The death of a young Canadian Catholic woman during the London Bridge attack has inspired people to help save lives in their own community.

Christine Archibald, 30, whose family lives in British Columbia, died in the June 3 attack that also claimed seven other lives and injured 48 people.

The Archibald family, parishioners of St. Rita Parish in Castlegar, British Columbia, released a statement June 4 describing Christine Archibald as person who “had room in her heart for everyone and believed strongly that every person was to be valued and respected.”

“She lived this belief working in a shelter for the homeless until she moved to Europe to be with her fiance,” the statement continued. “She would have had no understanding of the callous cruelty that caused her death. Please honor her by making your community a better place. Volunteer your time and labor or donate to a homeless shelter. Tell them Chrissy sent you.”

Since the statement was released, the hashtag #Chrissysentme emerged across social media from people who have donated to Castlegar charities in Archibald’s honor.

“We are deeply moved by the #Chrissysentme movement and the acts of love occurring in response to the tragic violence in the London attacks,” Kristy Hayter of Covenant House Vancouver, told The Catholic Register in Toronto in an email.

The terrorist attack unfolded, authorities said, when three men in a van mowed down people on the London Bridge and then left the vehicle to go on a killing spree in Borough Market, a popular restaurant and bar district located south of the river.

Archibald was said to be walking ahead of her fiance when she was struck by the van. The three men were shot and killed by police at the scene.

Archibald, a graduate of Mount Royal University in Calgary, Alberta, worked at Alpha House in Calgary for two years before she moved to the Netherlands with her fiance. Alpha House is a nonprofit organization that provides programs for men and women struggling with drug and alcohol addictions.

“She came to us as a social work student and then became a social worker,” Kathy Christiansen, executive director of Alpha House, told CTV News. “But I think one of the things we can say about Chrissy is that she had a natural talent and she was loved by clients and staff alike.”

Archibald is survived by her parents, Greg and Barbara Archibald; two sisters, Kathryn Fairbank and Caroline Stuart; and her fiance, Tyler Ferguson.

Residents of Castlegar were planning a Peace and Healing vigil for June 11 to commemorate Archibald as well as two other people in the community who recently died.

Jean Ko Din writes for The Catholic Register, based in Toronto.

PREVIOUS: The mystery of God’s fatherly love is a great revolution, pope says