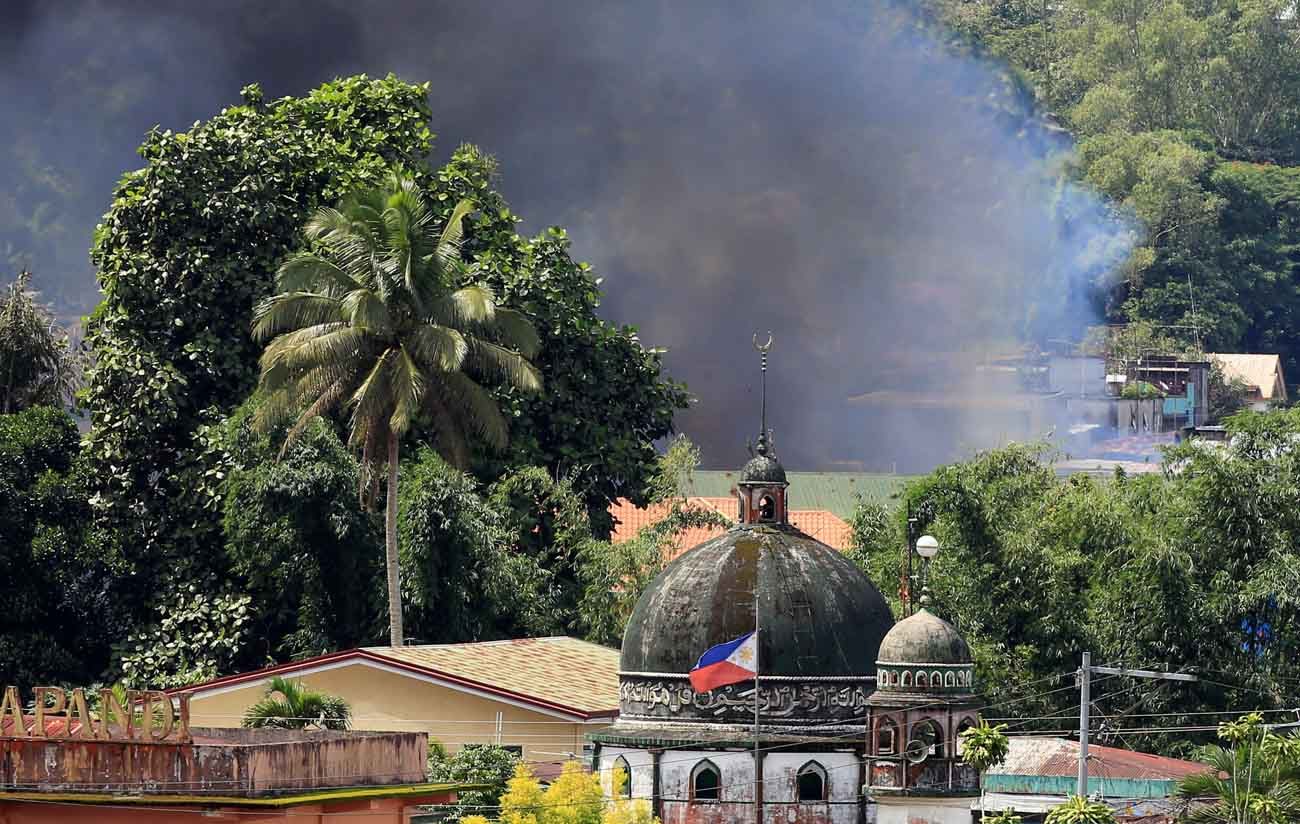 Smoke billows from a burning building near a mosque June 2 as government troops continued their assault on Islamic militants in Marawi, Philippines. Muslim religious and political leaders in the Philippines joined a Catholic bishop in condemning the desecration of a Catholic cathedral by terrorist gunmen in the besieged city. (CNS photo/Romeo Ranoco, Reuters)

MANILA, Philippines (CNS) — Muslim religious and political leaders in the Philippines have joined in the barrage of condemnation of the desecration of a Catholic cathedral by terrorist gunmen in the besieged city of Marawi.

“Let it be known to all that Islam commands all Muslims even in war time to protect places of worship,” read a statement issued June 7 by the National Ulama Conference of the Philippines, which represents the Muslim leaders.

They later burned the church and abducted Father Teresito Soganub, vicar general of the Prelature of Marawi, and several church workers.

The Muslim leaders said, “what this terrorist group has done is un-Islamic and a blatant disrespect and disregard of the teachings of Islam.”

“They do not represent Islam but the enemies of Islam,” they said.

Their comments were the most recent censure of the church attack. A local governor and the Catholic bishop who heads the prelature also condemned the desecration.

Bishop Edwin de la Pena of Marawi was angered by insurgents’ actions after seeing the video. “Our faith has really been trampled on,” he said.

“That is blasphemy. It’s unacceptable. It’s demonic,” he added.

The bishop admitted that prior to the attack on Marawi, there was already information that a local terrorist group had been planning to “destroy and burn the church.”

“But we didn’t take it seriously because for us it was unthinkable that it was going to happen in Marawi,” Bishop de la Pena said.

Gov. Mujiv Hataman of the Autonomous Region in Muslim Mindanao described the desecration of the cathedral as “inhumane and unacceptable.”

“These terrorists are nothing but hypocrites who undermine the true essence of Islam,” the Muslim governor said.

Hataman called the gunmen “immature and reckless” who quote the Quran “in perverse ways that fit their equally perverse cause.”

“These infidels must be condemned and shunned away from the Muslim community for they are unworthy of the promises of Allah and the pleasures of paradise,” Hataman added.

Meanwhile, authorities in the city of Iligan refused to issue a permit to an interfaith group that was planning an outdoor prayer service.

Samira Gutoc-Tomawis, a Muslim peace activist, said several Muslim groups expressed interest in attending the activity to pray for the safety of people displaced in Marawi.

“We would have wanted to highlight the value of life,” she said, adding that part of their prayer was for the safety of Father Soganub.

Gutoc-Tomawis said “thousands of Muslims and Christians” are still trapped in the besieged city, which has been the target of military airstrikes in past days.

In addition, more than 235,000 people, most of them Muslims, were reported to have been displaced by the continuing conflict.