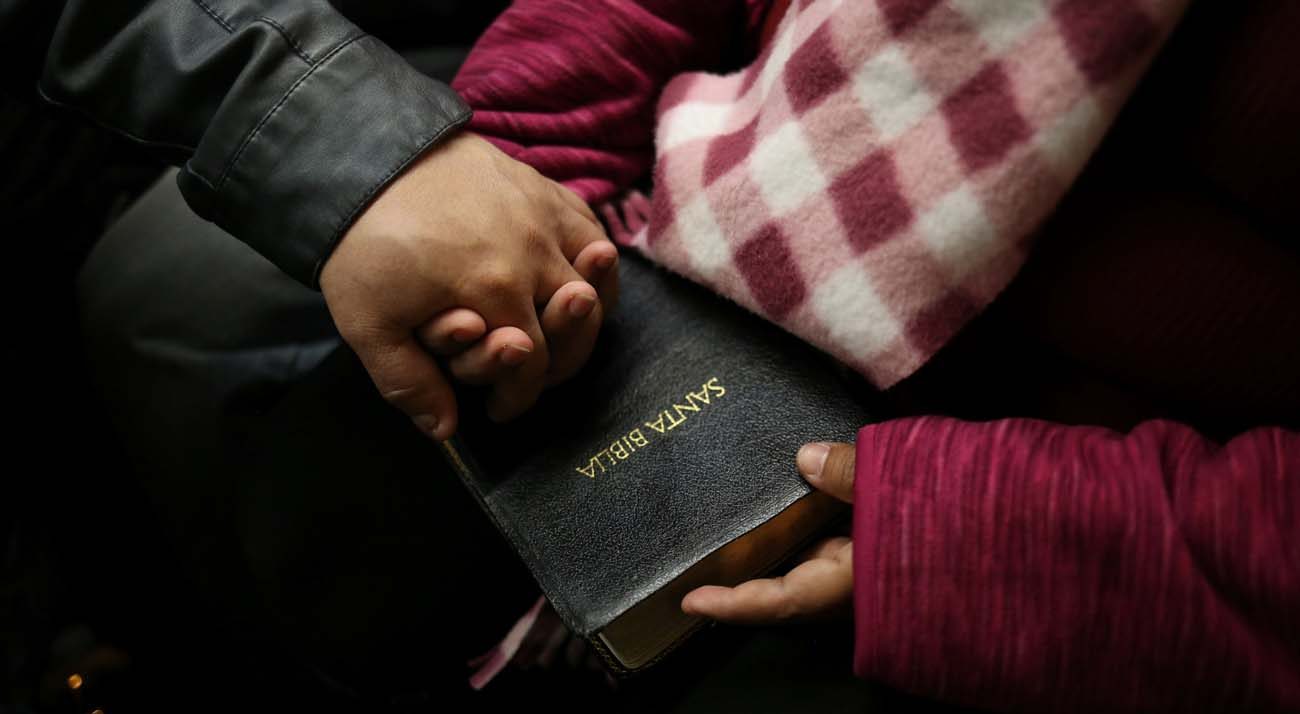 A couple in Toronto hold a Bible while commuting to a Spanish language Mass April 8. (CNS photo/Chris Helgren, Reuters)

TORONTO (CNS) — A new poll suggests more Canadians than ever believe religion does more harm than good, but even the pollsters disagree on what the numbers mean for the future of faith in the country.

Ipsos Public Affairs surveyed 1,001 Canadians online from March 20 to 23 and the results suggest more Canadians are moving away from formal religions.

About 51 percent of respondents agreed that “religion does more harm in the world than good.” That’s a seven-point increase from a similar survey in 2011.

“A couple of points of shift is not a big deal because that’s all in margin of error, but when we have changes of seven points in six years … that’s a significant shift,” said Sean Simpson, vice president of Ipsos Public Affairs.

Simpson told The Catholic Register, a Canadian Catholic weekly, that in a technological age where information is so easily accessed, Canadians have a “higher sensitivity” to news of religious radicals committing acts of violence and terrorism.

He also attributed the shift in public perception to the growing secularization of Western culture.

However, Reginald Bibby, a sociologist at the University of Lethbridge in Alberta who studies religion trends, said Canadians are much more complex than the survey reveals.

“By our standards, in terms of sociology of religion, all I’m saying is Ipsos has very loose items,” he said. “That item about religion doing more harm than good … our figure was 51 percent positive on that, so virtually the same figure.”

Bibby explains that 51 percent in either direction can be understood as a 50/50 split and Canadians have been split on this particular statement for many years.

Bibby’s data comes from research for a book he published in April called “Resilient Gods, Being Pro-Religious, Low Religious, or No Religious in Canada.”

In his research dating to 1975, he found that a “solid core” of 30 percent of Canadians view religion as a central part of their lives. Another 30 percent reject religion, while the remaining 40 percent are somewhere in the middle.

Bibby said that depending on any number of social and cultural factors, the size of each group would shift slightly over the years. However, he believes religion is here to stay. With a steady increase in immigration, Bibby said, the “pro-religious core” in Canada is assured for the foreseeable future.

NEXT: Pope leads prayers for peace in Venezuela