Cardinal Re chosen subdean of College of Cardinals 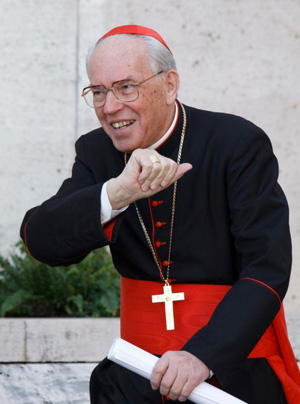 Italian Cardinal Giovanni Battista Re is pictured in a 2012 photo at the Vatican. Pope Francis approved the election of Cardinal Re, 83, as subdean of the College of Cardinals. (CNS photo/Paul Haring)

VATICAN CITY (CNS) — Pope Francis approved the election of Italian Cardinal Giovanni Battista Re, 83, as subdean of the College of Cardinals.

He replaces 94-year-old French Cardinal Roger Etchegaray, who moved in January to a home for retired priests in Bayonne, France, and asked to be relieved of his role as the second-in-charge in the body of cardinals.

When a pope dies, the dean informs heads of state and diplomats accredited to the Holy See. He presides over the meetings of the entire College of Cardinals in the days preceding a conclave to elect a new pope. And, if he is under the age of 80 and therefore eligible to vote in the conclave, he presides over the actual election in the Sistine Chapel.

The dean and subdean are elected from among a very small group of cardinals known as the cardinal-bishops. Instead of having titular parishes or churches in Rome, they are given titles to one of the suburban dioceses surrounding Rome.

Cardinal Etchegaray remains a cardinal-bishop. In addition to Cardinals Sodano and Re, the other cardinal-bishops are: Nigerian Cardinal Francis Arinze, 84; Italian Cardinal Tarcisio Bertone, 82; and Portuguese Cardinal Jose Saraiva Martins, 85.

NEXT: Vatican: Failure to protect child migrants an insult to human dignity