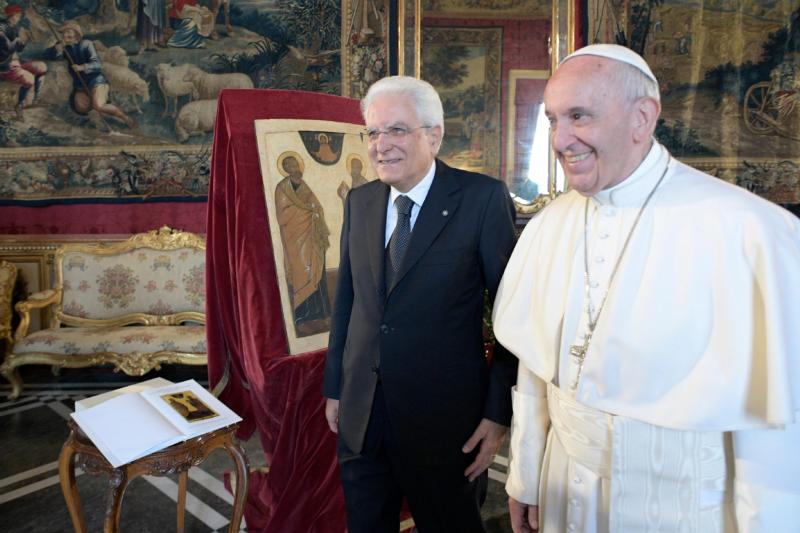 VATICAN CITY (CNS) — Generosity, hard work, solidarity and a recognition of the dignity of the human person are essential for facing the major challenges posed by natural disasters, a large influx of migrants and a crisis in creating jobs, especially for young people, Pope Francis told Italian President Sergio Mattarella.

Making a formal visit June 10 to the Quirinal Palace, Italy’s presidential residence, Pope Francis said he looks at Italy with hope because “the dignity of the person, family and work” are values that inspired generations of Italians — including his forebears — and continue to inspire people today.

Using those values to “transform challenges into occasions for growth,” he said, is seen particularly in “the welcoming of the numerous refugees who have landed on your shores,” the rescue work in the Mediterranean carried out by Italian ships and the vast network of volunteers who assist the newly arrived migrants.

Still, Pope Francis said, it is not right that Italy and a handful of other countries have been left taking care of so many migrants and refugees. “It is indispensable and urgent to develop broad and incisive international cooperation” to assist, resettle and help integrate the new arrivals.

“Sentiments and attitudes that find their most genuine source in the Christian faith” also are seen in how Italians responded when central Italy was struck by strong earthquakes in August and October 2016, the pope said.

Joining him for the visit by Pope Francis, President Mattarella invited 200 young people from the regions struck by the earthquakes. The pope and president mingled with them at the end of the visit, shaking hands and posing for photographs.

In his formal speech, the pope also urged the Italian government to do more to favor “an alliance of synergies and initiatives so that financial resources” are devoted to job creation, particularly for young adults.

Mattarella told Pope Francis safeguarding the environment is another area where he sees a convergence of Christian values and the democratic ideal of seeking the common good.

“Justice passes through the safeguarding of available resources and their equitable distribution,” he told the pope.

NEXT: Cardinal Re chosen subdean of College of Cardinals