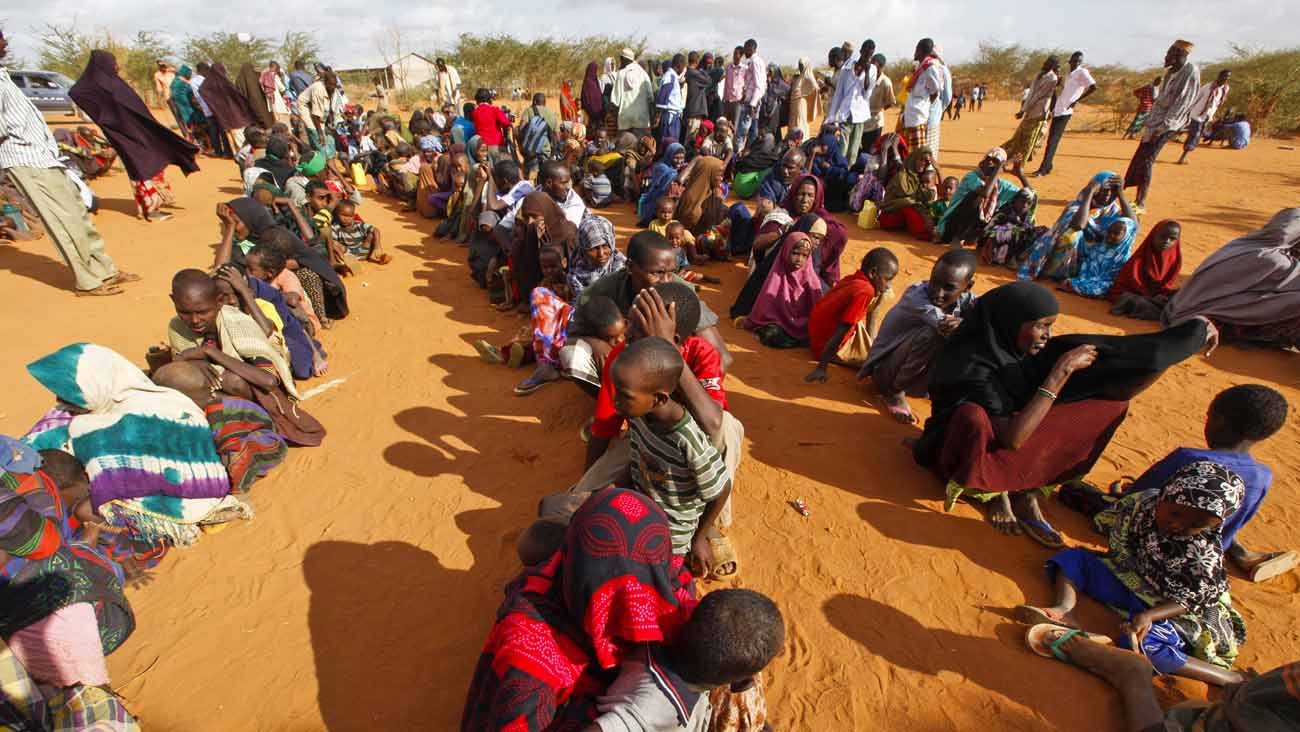 Somali refugees are seen after arriving in 2011 at a camp in Dadaab, Kenya.In Dadaab, the world's largest refugee complex in northeast Kenya, Somali refugees are facing the question of whether to return to their homeland or stay and risk being forced to move if the Kenyan government closes the camp. (CNS photo/Dai Kurokawa, EPA)

NAIROBI, Kenya (CNS) — In Dadaab, the world’s largest refugee complex in northeast Kenya, Somali refugees are caught in a very delicate and complex situation and Bishop Joseph Alessandro of Garissa, Kenya, is determined to help the world understand their plight.

Bishop Alessandro said the complex’s 245,000 refugees, mainly Muslim Somalis who have fled famine and attacks carried out by al-Shabaab, an al-Qaida affiliate in East Africa, face a difficult decision: whether to return to Somalia or remain in the sprawling camp, which the Kenyan government wants to close.

“When they hear not so good stories of those who have returned home, in spite of the incentives, and see the government wanting to close the camp, they don’t find this as an easy situation,” the bishop, who chairs the Kenya Conference of Catholic Bishops’ Commission on Refugees, Migrants and Seafarers, told Catholic News Service.

Bishop Alessandro fears that some the refugees who had accepted voluntarily repatriation to Somalia were returning to the camp after it became too unsafe in their homeland. Some refugees had been helped by the Catholic Church and church-related agencies in their return home.

The bishop cited a media report about a family that lost four children to the militants and were forced to return to Dadaab.

Father Alfred Muriithi, who ministers in the town of Wajir in the region, echoed the bishop, saying that some Somalis were returning, but under cover.

“It’s happening, but under a lot of secrecy because of the threat posed by al-Shabaab. The community tends to be very secretive. They would not mention it,” Father Muriithi said.

“When they took the journey, the refugees were promised many benefits. When they did not get them, some have opted to travel back secretly,” he added.

Bishop Giorgio Bertin of Djibouti, apostolic administrator of Mogadishu, Somalia, said it was difficult to determine the extent of the challenges facing the refugees.

“I have helped a few individuals to return to Somalia from Djibouti,” he said. “Caritas Djibouti has also helped others, including adults and children. We have provided some food and medical care for them. The situation in Southern Somalia is still of drought and insecurity.”

The camp recently came under the spotlight after officials claimed al-Shabaab militants had penetrated the camp and established secret terror cells that were radicalizing and recruiting youthful refugees for the Somalia-based Islamist group.

A formal plan to close the camp was announced in May 2016, but the plan was shelved in November, with the Kenyan government citing increased insecurity and lack of funds for the closure.

In February, the High Court of Kenya blocked the camp’s closure, saying that the government could not unilaterally shut down the massive facility. Rights groups argued that the closure would have left the refugees with nowhere to go.

While the closure remains on hold, the government has ceased registering refugees.

“Refugees who are genuine are to be welcome,” Bishop Bertin said. “At the same time, we all must work to address the causes of forced migration and lack of respect for refugee human rights.”

In Nairobi, during an observance of World Refugee Day June 20, Joseph Nkaissery, cabinet secretary for internal security, said more than 70,000 refugees had voluntarily repatriated to Somalia.

“More refugees express the desire to return home. The process must be carried out in a humane way,” Nkaissery said. “We urge nations to support the fight against al-Shabaab so that more territory can be recovered to make it safe for more refugees to return.”

Bishop Alessandro cautioned, however, of enormous of impact of closing the camp complex. Instead, he stressed that the world must continue to accept, help and care for the spiritual and material needs of the refugees.

Dadaab was established in 1991 following the collapse of the Somali government. While it was made to accommodate 90,000 refugees, it has held over many times the intended capacity.

Christian and Catholic relief agencies have been supporting education, health and sanitation, and psychosocial support to the refugees in the camp and other areas.

According to the bishop, his diocese continues to send a priest to the camp to celebrate Mass and administer the sacraments, including baptizing children.

He said church was also carrying similar programs in Kakuma Refugee Camp in Turkana in northern Kenya, where many Christians of South Sudanese origin had settled.

“The Salesians are doing a lot of good work in the Kakuma,” Bishop Alessandro said, particularly citing the order’s work in education.

PREVIOUS: Pope: Clergy in Middle East must be the ‘last among the least’