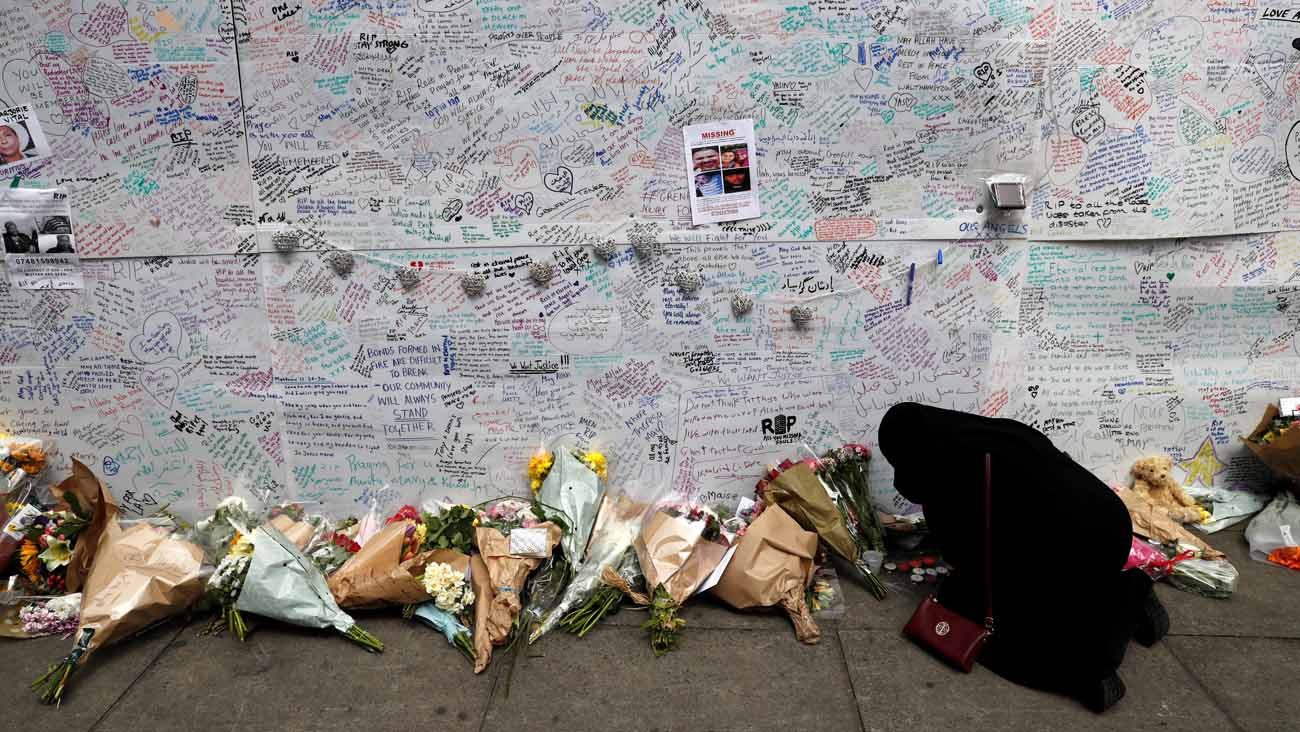 A woman kneels in prayer June 16 beside a message wall near a London apartment building destroyed in a June 14 fire. Church authorities in London confirmed that students from nearby Catholic schools are among the missing from the June 14 fire. (CNS photo/Stefan Wermuth, Reuters)

Church agencies are helping London Catholic school students cope with the trauma of the Grenfell Tower fire, including knowing that some of their fellow students are missing.

Children who attended Catholic schools in the shadow of Grenfell Tower are among about 76 people who have yet to be accounted for. Police have confirmed that 30 people died in the June 14 fire, with the death toll expected to rise as emergency services personnel search the ruins for bodies.

John Paul Morrison, the director of education for the Archdiocese of Westminster, told Catholic News Service June 16, said the archdiocese was offering counseling to students, to help them to deal with the trauma of the tragedy.

“What they have witnessed was incredibly shocking,” said Morrison. “Television and media can only touch on it.

“The thing that really hit the students was the screaming,” he said. “I spoke to some people yesterday who were very upset by that — by hearing, ‘Help me!’, ‘Help me!'”

Morrison confirmed that students were missing from the schools, but he declined to say how many, saying he did not wish to identify them prematurely.

He said hundreds of other students and their families were evacuated from the vicinity of the 24-story building because of the possibility that it might collapse and scatter debris over a half-mile radius.

All students of the 240-place St. Francis of Assisi Catholic Primary School, which is close to the tower, have been relocated to Sion Manning Catholic Girls School, which is outside of the zone cordoned off by police.

“I think from an educational point of view, it is really important you get back to some form of consistency and normality as much as you can in a period of incredible anguish and tragedy,” said Morrison.

He said that teachers tried extremely hard to provide students with a normal day in class, and schools across the archdiocese helped by delivering books and other materials needed at short notice.

Morrison said he was “very proud” of the response to the tragedy of the Catholic Church “at every level.”

“It was good to see all elements of the church’s mission come together to address what is an incredibly said but also an incredibly complex situation,” he added.

St. Francis of Assisi Church in Notting Hill was one of two churches to serve as a collection point for members of the public who wished to contribute clothing, food and other supplies for families dislocated by the fire.

Father Gerard Skinner, the parish priest, was so inundated with donations that within hours there was no storage space remaining.

He left a message on his telephone to tell well-wishers that the church was “at capacity.” He said he was also overwhelmed by offers of practical assistance.

The fire in Grenfell Tower in North Kensington, in the west of the capital, is believed to have started in the early hours of the morning in a faulty refrigerator in the fourth-floor home of Behailu Kebede, a taxi driver from Ethiopia.

It spread rapidly because it ignited the flammable cladding that encased the tower block, and many trapped tenants jumped from the building to escape the flames and smoke.

About 80 people are being treated in hospital and about 17 of them are described as being in “critical” condition.