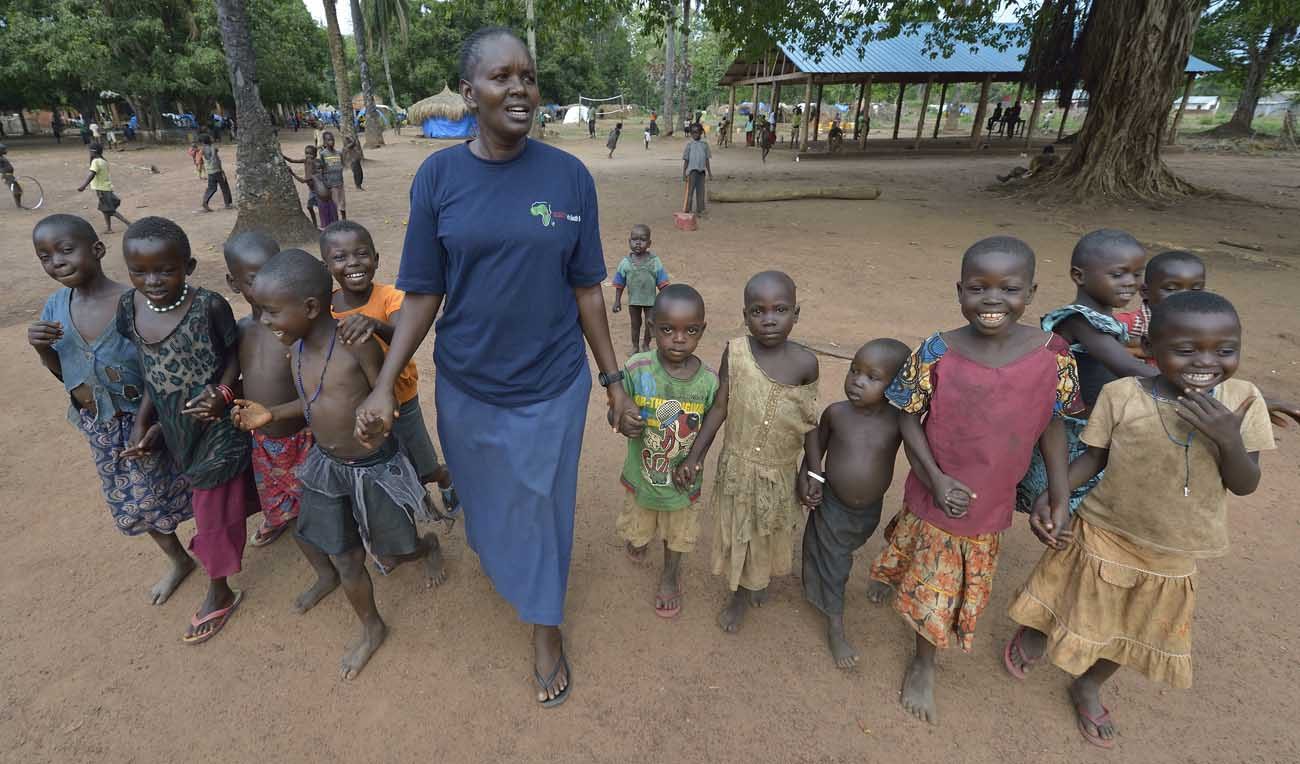 Sister Josephine Murigi, a member of Our Lady of the Missions and Solidarity with South Sudan, walks with children in a camp for more than 5,000 displaced people in Riimenze. Families here were displaced in late 2016 and early 2017 as fighting between government soldiers and rebels escalated. (CNS photo/Paul Jeffrey)

RIIMENZE, South Sudan (CNS) — Violence near South Sudan’s border with Congo has driven 6,000 people from the countryside to shelter in the shadows of the village church, where some have been surviving on mangoes.

Before the mangoes, there were the sweet potatoes of Sister Rosa Le Thi Bong.

A member of the Sisters of Our Lady of the Missions, Sister Rosa is a member of Solidarity with South Sudan, an international Catholic network that supports the training of teachers, health workers and pastoral agents in the African country. Solidarity’s presence in Riimenze was originally conceived as a project to assist the parish with pastoral care while growing food to feed students and staff at a teacher training college the group runs in Yambio, an hour away.

Yet with support from Caritas Austria, Solidarity’s farm became a major teaching center on its own, modeling agricultural techniques for farmers seeking more sustainable ways of producing food.

Last year’s growing season was unusually productive, in part because of a new variety of sweet potato that Sister Rosa brought to Riimenze from her home in Vietnam. It flourished on the farm, and people loved its flavor.

“We had such a bumper crop on the farm last year that we were worried some of it would go to waste,” said Matthias Fettback, director of the Caritas agricultural program in the diocese. “And then the conflict broke out.

“It takes time for international aid agencies to respond to these emergencies. They have to come and make their assessments and studies, and because the situation is so politically charged they are reluctant to rush in, worried they’d be charged by the government with aiding the rebels,” he said. “So the corn and beans and pumpkin and Sister Rosa’s sweet potatoes saved the day for the displaced in those first difficult weeks.”

The Riimenze area had been relatively peaceful compared to the rest of South Sudan. Then last year an armed opposition group took up residence just across the border, in Congo. As its members passed through the jungle on their way to and from raids on government outposts elsewhere, they forced families to provide food. In response, South Sudanese soldiers showed up to accuse civilians of collaboration. When the governor criticized the army’s actions, he was fired by officials in Juba, the nation’s capital. 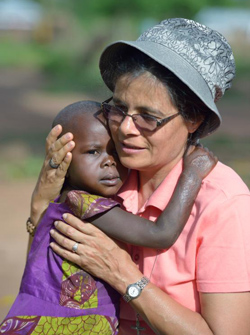 Sister Raquel Peralta of Paraguay embraces a girl in a camp for more than 5,000 displaced people in Riimenze, South Sudan. (CNS photo/Paul Jeffrey)

Late in 2016, things got even worse. Soldiers looted houses and tortured and killed two church workers, reportedly burning them alive inside their homes. On New Year’s Eve, a scorched-earth campaign drove thousands into Riimenze.

Several times recently, church workers said, rebels and government soldiers came into the camp looking for particular people, often beating them and looting their makeshift shelters. In at least one case, they took people away.

The parish priest said the displaced often ask him when they can go home.

“I don’t have an answer. The security situation has not improved. The rebels are still in the bush, and the government soldiers are still pursuing people and killing innocent people,” Father Victor Babie told Catholic News Service.

He said hunger motivates some to risk going out to plant their abandoned farms.

“In the morning you see some people go out to farm, and they take that risk because they don’t want to die of hunger. People think that if they can plant something, at least they might have a little to eat. In recent weeks many have survived only on mangoes. But the mango season is soon coming to an end,” he said.

Besides food, the displaced families needed tarps and other supplies which Solidarity, with funding from Catholic Relief Services and the Italian bishops’ conference, provided. Solidarity also drilled two additional wells in the village and continued running a clinic and kindergarten.

The longer the displacement goes on, food insecurity will only grow worse, said Fettback. Caritas Austria has been working for several years with farmers in the region, developing sustainable methods of using the land, but the massive displacement around Riimenze has changed things.

“We’re back to square one with agricultural development. When their homes were burned and looted, the farmers lost both their tools and the seeds they had saved. So we’re going to give people seeds and tools again and hope they can find a plot of land that they can farm without getting killed.” he said.

“The farmers are going back to their traditional method of coping with crisis, where survival often depends on being able to hide in remote areas and become hunter-gatherers. Without stability, agricultural development initiatives have no chance.”

That’s bad news for the country as a whole, Fettback said, because the fertile Equatoria region surrounding Riimenze had provided food to the rest of the country.

Although Fettback was twice held against his will by rebels late last year, he said the church-sponsored farm has been exempt from attacks.

“Neither the rebels nor the government soldiers have touched, much less looted the farm. It’s a sign of the respect that both sides have for our work with the people,” he said. “Unfortunately, that’s as far as it goes. We’ve been unable to protect the civilians from the people with guns.”