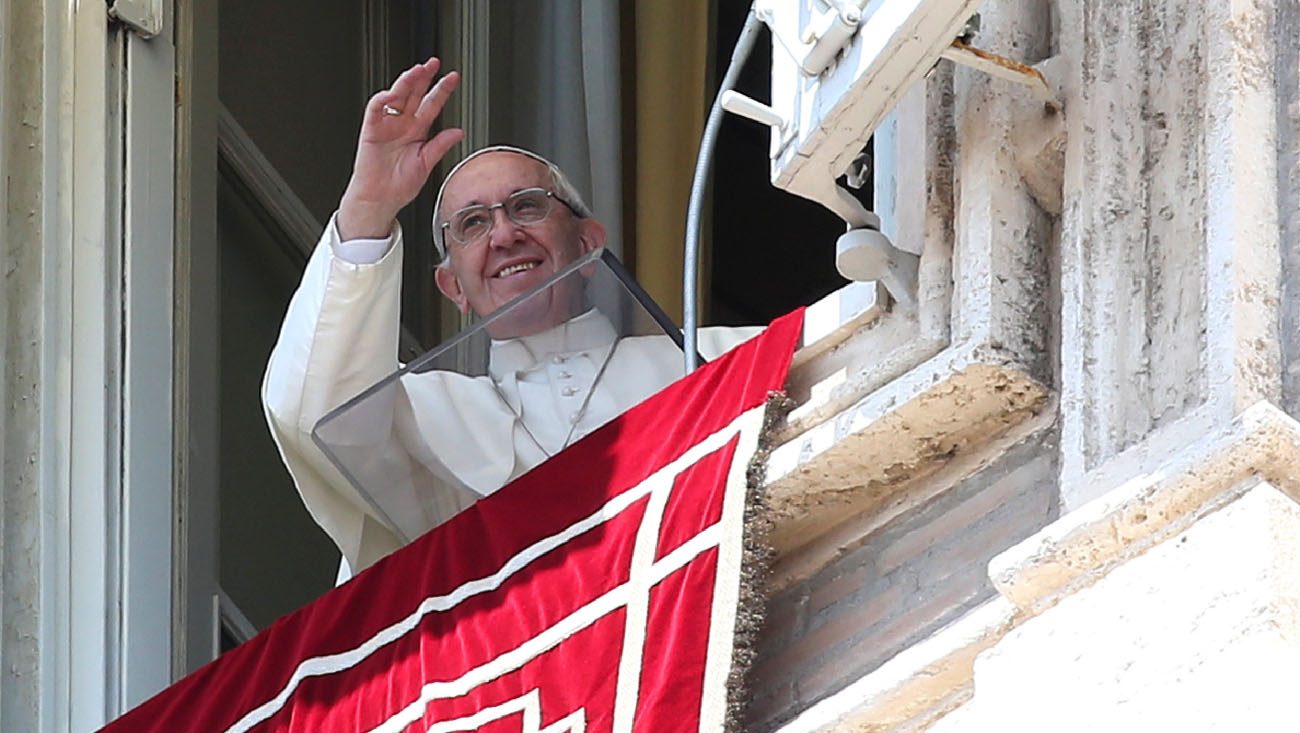 Pope Francis waves as he leads the Angelus from the window of his studio overlooking St. Peter's Square June 25 at the Vatican. (CNS photo/Alessandro Bianchi, Reuters)

VATICAN CITY (CNS) — Bringing the Gospel to the world isn’t a walk in the park; it will lead to ridicule and contempt, even persecution, Pope Francis said.

But Christians must never be afraid and must keep on going since “Jesus never leaves us on our own because we are precious to him,” the pope said before praying the Angelus June 25 with people gathered in St. Peter’s Square.

The pope’s reflection centered on the day’s readings (Jer 20:10-13 and Mt 10:26-33), which speak about God always being with his people no matter what. In fact, in the Gospel reading Jesus tells his disciples three times to not be afraid and to “proclaim on the housetops” what has been revealed to them in a whisper.

The Lord still tells people today to never be afraid, the pope said. Christians must never forget that; especially “when we have some ordeal, persecution, something that makes us suffer, let us listen to Jesus’ voice in our heart.”

Going on mission is not a form of “tourism” or a vacation where life will be carefree, he said; there may be failure and pain as people may refuse the Gospel message or persecute the messenger.

“This is a bit frightening, but it’s the truth,” the pope said.

The pope reminded everyone that persecution against Christians was still happening today. He asked people to pray for those who endure persecution and “continue to give witness to the faith with courage and fidelity.”

He asked that their example be an inspiration to those who live where hostility and adversity may not be so apparent, but the challenges are still great.

“There are many who smile to our face, but behind our backs, fight the Gospel,” he said.

Also, instead of being a sheep among wolves, a disciple may have to be like a sentinel, trying to wake up people “who do not want to snapped out of a worldly stupor, who ignore the words of truth of the Gospel and fabricate their own ephemeral truths.”

“If we go to or live in these contexts and we proclaim the words of the Gospel, this will bother people and they will not look at us well,” the pope said.

Each disciple is called to conform his or her life to Christ and since Christ was refused, abandoned, persecuted and killed, disciples be prepared for the same, he said.

“There is no such thing as Christian mission marked by tranquility,” the pope said. “Difficulties and tribulation are part of the work of evangelization and we are called to find in these things an occasion to ensure the authenticity of our faith and our relationship with Jesus.”

Enduring trouble in Christ’s name is an opportunity to grow in trusting in God, who “does not abandon his children” in the midst of the storm, he said.

NEXT: Auza: At heart of human rights is respecting inherent dignity of all