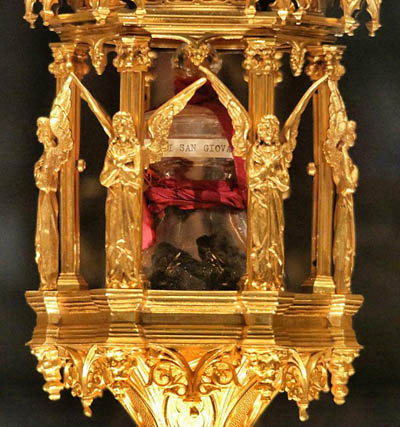 A reliquary holding a glass jar containing a relic of St. John Bosco is shown in this file photo. The relic, a piece of the saint’s brain, was stolen June 2 from the Basilica of St. John Bosco in Castelnuovo Don Bosco, Italy, and recovered June 15 by police. (CNS photo courtesy of the Salesians and Andrea Cherchi)

TURIN, Italy (CNS) — Inside a copper teapot in a kitchen cupboard, Italian police found the relic of St. John Bosco that had been stolen two weeks earlier from the basilica erected at his birthplace.

The press office of the Salesians in nearby Turin announced June 15 that Italian military police obtained a search warrant and discovered the relic early that morning in the home of a 42-year-old Italian man identified only by the initials C.G.

From previous encounters with the law, the man’s fingerprints were on file and they were found on the glass case protecting the relic and reliquary in the lower Basilica of St. John Bosco in the town of Castelnuovo Don Bosco.

Police said they watched and followed the man for several days before obtaining a warrant to search his home.

The relic, a piece of St. John Bosco’s brain, was still in its small glass jar tied with red ribbon. The seal of authenticity was intact, the Salesians said.

“It appears the motive for the theft had nothing to do with a desire to demand a ransom nor was it stolen for a collector,” the police said in a statement. Apparently, the thief “erroneously” believed the gold-painted reliquary over the glass jar was worth a lot of money.