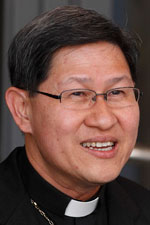 MANILA, Philippines (CNS) — Instead of material gifts, a priest and employees of the Archdiocese of Manila gifted Cardinal Luis Antonio Tagle with their blood.

The collection drive was held at the Archdiocesan Chancery in the historic Intramuros on June 19 to commemorate the birthday of the cardinal, who will turn 60 June 21.

Father Sanny de Claro, archdiocesan director of human resource development, told ucanews.com that the group chose to gift the cardinal with their blood because it symbolizes life.

“I think the best gift is to help save or extend somebody’s life, that’s why we have this blood donation drive,” Father de Claro said.

“Through this, we also want to show the cardinal that we treasure life,” he added.

The blood collected will be used particularly to help poor people who cannot afford to buy blood, the priest said.

“We do this yearly for the cardinal for that purpose … we want to give life,” he said in expressing thanks to those who joined the effort.

In the past, the archdiocese also held a blood donation drive to celebrate the birthday of then-Cardinal Gaudencio Rosales. Cardinal Tagle succeeded Cardinal Rosales in December 2011.

The blood donation drive was organized by the archdiocese in cooperation with the Philippine Red Cross.

NEXT: Indonesian priests seek Vatican help in row with bishop over church funds