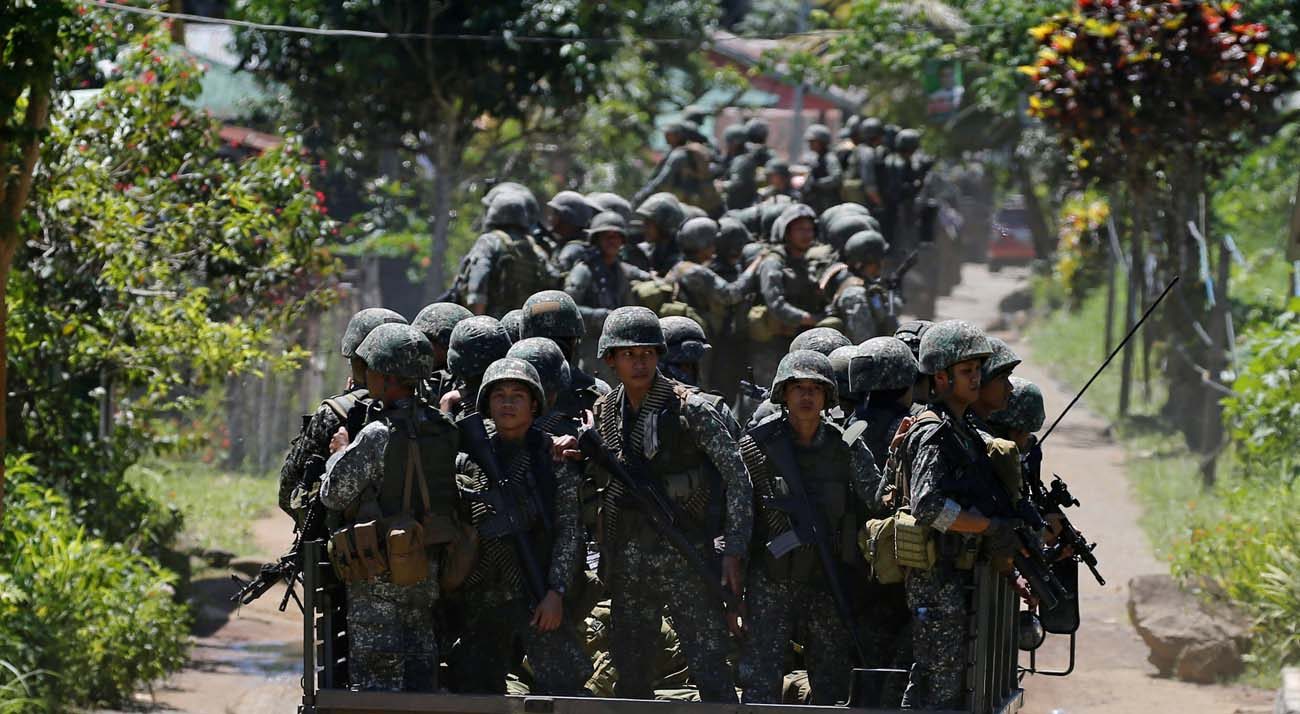 Philippines army soldiers ride in trucks into the fighting zone as government troops continue their assault against Islamic militants in Marawi. The Catholic bishop of Marawi dismissed as "ridiculous" proposals to negotiate for the release of a priest held captive by terrorist gunmen. (CNS photo/Jorge Silva, Reuters)

DAGUPAN, Philippines (CNS) — The Catholic bishop in the southern Philippine city of Marawi dismissed as “ridiculous” proposals to negotiate for the release of a priest held captive by terrorist gunmen.

Speaking before a gathering of church people in the northern province of Pangasinan, Bishop Edwin de la Pena of Marawi said “there is no way we can dialogue” with extremists, reported ucanews.com.

The bishop said that for the past four decades, the Catholic Church’s response to war and conflicts in the southern region of Mindanao has been dialogue.

“We can only dialogue with like-minded people,” he told the June 29 gathering at the Solidarity Congress for Persecuted Christians. The gathering was sponsored by Aid to the Church in Need, a pontifical foundation that supports victims of persecution.

Ucanews.com reported Bishop de la Pena said the church should “choose the kind of people that we will have a dialogue with.”

He said people who have fallen victim to extremism, those who “experience so much pain … are all the people who are open to have a dialogue with us.”

Security forces in southern Philippines continue to battle with terrorist gunmen who claim to have links with the so-called Islamic State.

The gunmen, belonging to the local Maute terror group, attacked Marawi May 23 and burned the city’s Catholic cathedral and a Protestant school. They kidnapped Father Teresito Soganub and several church workers.

The Philippine military said Father Soganub was seen alive June 25, during a “humanitarian pause” in the conflict.

The government said the terrorists are still holding about 100 hostages who are being used as human shields.

On June 28, at least 17 civilian bodies were recovered by the military from the besieged city. These were in addition to the 27 civilians earlier confirmed killed when fighting broke out last month, reported ucanews.com.

The conflict has so far resulted in the deaths of at least 299 terrorists and 71 soldiers and policemen.

Some 2,700 civilians have been rescued from the battle zone while about 300,000 individuals remain in evacuation centers in nearby areas.