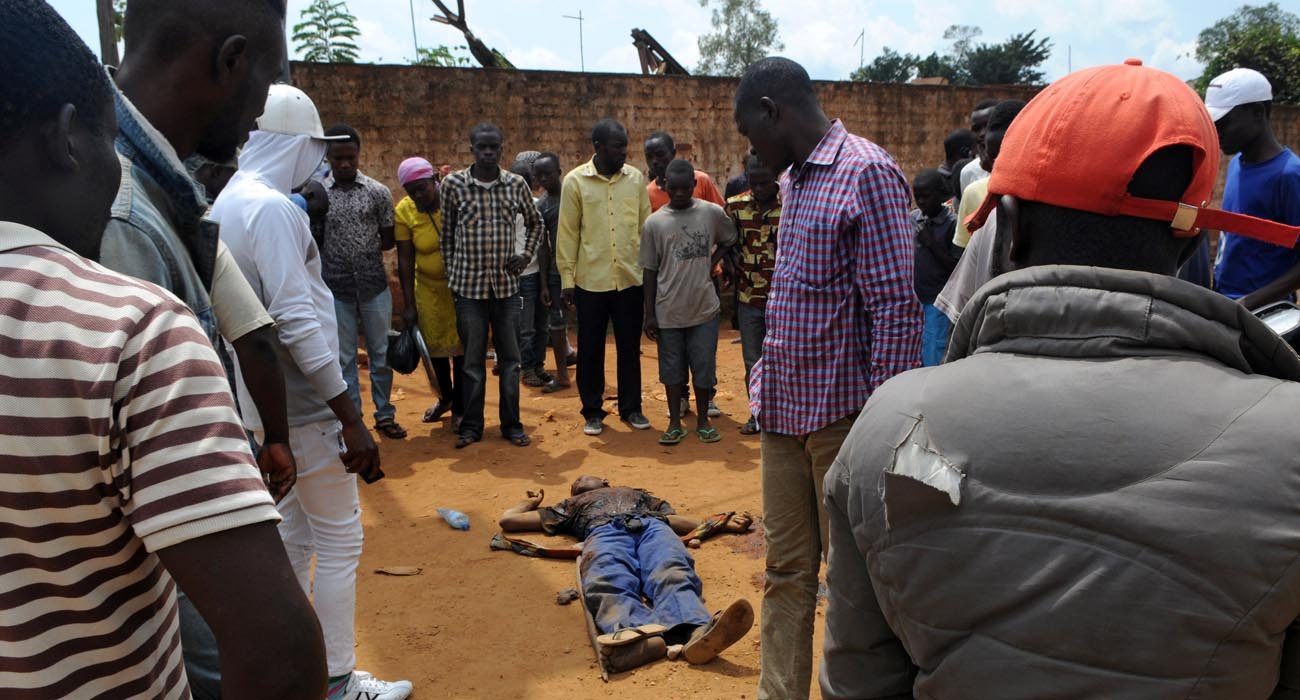 Civilians gather around the body of a man June 22 killed during fighting between the army and militia fighters in Beni, Congo. Catholic bishops in Congo accused their government of suppressing civil liberties and demanded free elections envisaged under a church-brokered New Year accord. (CNS photo/Reuters)

“The miserable situation we’re living in reflects the persistent social-economic crisis, which is due to the failure to organize elections,” the bishops’ conference said. “Although our republic’s constitution guarantees every citizen the right to enjoy their freedoms, we’re seeing a growing restriction on freedom of expression and the barring of peaceful demonstrations, alongside an excessive use of force.”

In a 24-point message after their June 19-23 plenary in Kinshasa, the bishops said they were “profoundly alarmed” by deteriorating economic, security and humanitarian conditions, as well as by rampant corruption and fiscal abuses.

They added that 60 Catholic parishes had been “profaned and closed” during nationwide violence, along with 31 Catholic health centers and 141 church-run schools, while 20 Catholic villages and thousands of private homes had been “completely destroyed.”

“Defenders of human rights, and political and social actors whose views differ from those in power are regularly threatened or arbitrarily arrested, while those responsible for these violations are not pursued by the judicial system.”

The Catholic Church makes up about half the 67.5 million inhabitants of the mineral-rich Congo, formerly Zaire, and helped broker the Dec. 31 accord between supporters and opponents of President Joseph Kabila. Under the accord, Kabila was to remain in office, despite ending his final constitutional term, pending late-2017 elections.

However, in March, the bishops’ conference abandoned attempts at a power-sharing settlement, citing “intransigence” on both sides over the choice of a provisional government.

In their message, the bishops said living conditions were now “more than precarious” for most Congolese, as “a minority of fellow citizens take the lives of millions hostage.”

They added that government forces and U.N. peacekeepers had been unable to end the violence, including nine months of fighting with rebel militias in Grand Kasai province that left nearly 3,400 dead and more than a million displaced.

“The political accord contained solution pathways for a peaceful exit from this crisis, but its integral implementation has been insignificant because of a lack of political will,” the bishops’ conference said.

“The political actors are piling up strategies for emptying the accord of its contents, thus mortgaging any prospect for free, democratic and peaceful elections. The pretended solutions now in place are hastening our country’s implosion rather than contributing to national cohesion.”

Addressing local officials in Lubumbashi, Congo, June 26, Kabila accused the bishops of “seeking to create disorder,” and threatening his government by insisting “it’s December or nothing.”

PREVIOUS: Pope tells archbishops not to be ‘armchair Catholics,’ but apostles