Pentecost is celebration of unity in diversity, pope says 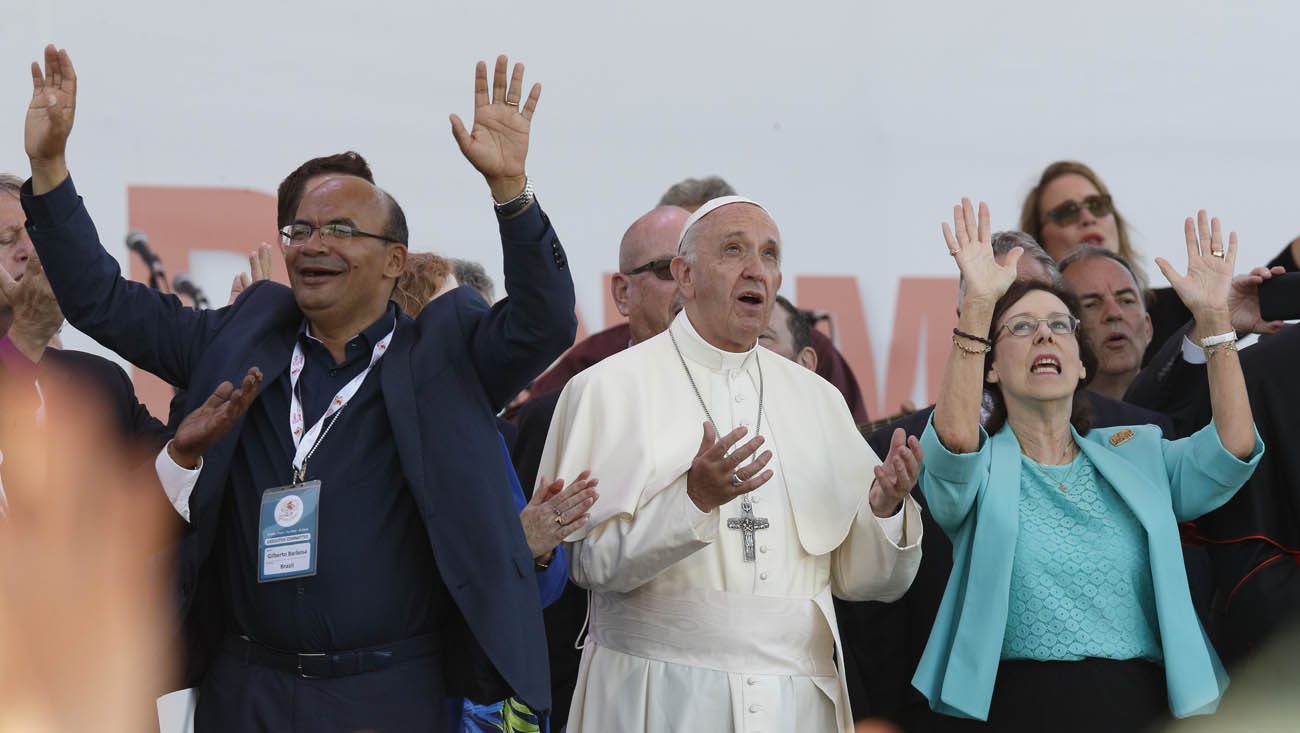 Pope Francis prays during a Pentecost vigil marking the 50th anniversary of the Catholic charismatic renewal at the Circus Maximus in Rome June 3. Next to the pope are Gilberto Barbosa from Brazil and Patti Gallagher Mansfield, a participant in the 1967 Pittsburgh retreat that marked the beginning of the Charismatic renewal. (CNS photo/Paul Haring)

VATICAN CITY (CNS) — The Holy Spirit continues to give Christians different gifts and to call them to share those gifts with each other in a community marked by forgiveness and “unity in diversity,” Pope Francis said on Pentecost.

“In a way both creative and unexpected,” the pope said, the Holy Spirit “generates diversity, for in every age he causes new and varied charisms to blossom. Then he brings about unity: he joins together, gathers and restores harmony.”

With tens of thousands of Catholic charismatics from around the world and with dozens of Pentecostal and evangelical leaders present, Pope Francis celebrated Pentecost Mass June 4 in St. Peter’s Square and concluded a five-day celebration of the 50th anniversary of the Catholic charismatic renewal.

In his homily at the Mass, the pope said Christians can block the unity in diversity desired by the Holy Spirit by focusing on their differences rather than on what they share.

“This happens when we want to separate, when we take sides and form parties, when we adopt rigid and airtight positions, when we become locked into our own ideas and ways of doing things, perhaps even thinking that we are better than others,” he said.

“When this happens,” the pope said, “we choose the part over the whole, belonging to this or that group before belonging to the church” and taking pride in being “Christians of the ‘right’ or the ‘left’ before being on the side of Jesus.”

The other temptation, he said, is to seek unity without tolerating diversity. “Here, unity becomes uniformity, where everyone has to do everything together and in the same way, always thinking alike.”

When the Holy Spirit descended on the disciples at Pentecost, he said, the first gift the Spirit brought was forgiveness for their sins and the grace to forgive others.

“Here we see the beginning of the church, the glue that holds us together, the cement that binds the bricks of the house: forgiveness,” he said. 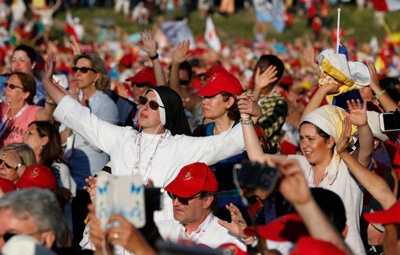 Forgiveness “preserves unity despite everything, prevents collapse and consolidates and strengthens,” he said. “Forgiveness sets our hearts free and enables us to start afresh.”

Pope Francis began his Pentecost celebrations at an ecumenical vigil June 3 with some 50,000 Catholic charismatics and Pentecostals from more than 125 countries gathered for praise and worship at the site of the ancient Roman Circus Maximus.

Although less exuberantly, the pope, too, sang with his hands cupped open or with his hands raised. He stood between Michelle Moran, president of the International Catholic Charismatic Renewal Services, and Patti Mansfield, who was present when the Catholic charismatic renewal was born. In February 1967 Mansfield was one of the Duquesne University students, who experienced an outpouring of the Holy Spirit during a retreat.

The charismatic renewal is “a current of grace,” Pope Francis told the crowd at the Circus Maximus. “It is a work that was born — Catholic? No. It was born ecumenical,” with similar results in many denominations and with Pentecostals providing support and education to new Catholic charismatics.

“It was born ecumenical because it is the Holy Spirit who creates unity,” the pope said. The Holy Spirit drew Catholics and Pentecostals together to profess that Jesus is Lord and “to proclaim together the Father’s love for all his children.”

In ancient Rome, Pope Francis said, Christians were martyred in the Circus Maximus “for the entertainment of those watching.” He urged the crowd to remember how many Christians are being killed for their faith today and to recognize that their murderers are not asking them their denomination, just whether or not they are Christian.

If those who want to kill Christians believe they are one, he said, it is urgent that Christians be “united by the work of the Holy Spirit in prayer and in action on behalf of those who are weaker.”

Being baptized in the Spirit and knowing how to praise God, he said, “are not enough” if Christians don’t also help those in need.

An Italian Pentecostal pastor, Giovanni Traettino, a friend of Pope Francis’ since they met at an ecumenical charismatic gathering in Buenos Aires in 2006, told the crowd that as Christians grow in their love for God, they should simultaneously grow in love for one another.

“The movement of the Holy Spirit, also known as the Pentecostal movement, has in its DNA — its life in the Holy Spirit — the vocation to build Christian unity,” he said. 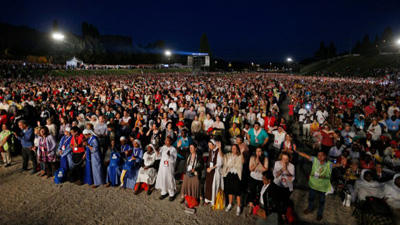 People attend a Mass at the worldwide jubilee gathering marking the 50th anniversary of the Catholic charismatic renewal at the Circus Maximus in Rome June 2. (CNS photo/Paul Haring)

Pentecostals and Catholic charismatics have not always gotten along, Traettino said. But “the election of Pope Francis clearly opened a new season, especially in relations with us.”

Capuchin Father Raniero Cantalamessa, preacher of the papal household, offered a reflection also focusing on the ecumenical vocation of the charismatic renewal.

How many of the divisions among Christians “have been due to the desire to make a name for ourselves or for our own church more than for God,” he asked. “A renewed outpouring of the Holy Spirit will not be possible without a collective movement of repentance on the part of all Christians.”

Tens of thousands of people gathered for hours of song and prayer before the pope arrived. As Rome’s summer sun beat down on the pilgrims, Elaine Pollard and Sandra Mobley from Holy Cross parish in Brooklyn, New York, found space in the shade under one of the few trees on the edge of the crowd. They had traveled to Rome with group of 88 people.

Both women are lifelong Catholics who discovered the charismatic renewal in 1989. Pollard said she has stayed with it “because my whole life changed. The first night I went I wasn’t impressed.” That was a Saturday and when she went to work on Monday, “I started to hum one of the songs and my heart just broke open, like living water” flowing forth. “It changed my whole life.”

As she spoke to Catholic News Service, the choir on stage started singing, “10,000 Reasons,” a song of praise. Pollard started to cry.

“We were singing this song when my husband died” 15 months ago, she said. He was in the hospital, dying, and her adopted daughter started singing it. Other relatives, who couldn’t be there in person, were connected by Skype and they were singing it, too, as he passed away.

It is still difficult, she said, but “he wanted me to come and be here.”

Kaye and George Balsam and Terry Mroz from St. Gabriel the Archangel parish in McKinney, Texas, were at the Circus Maximus as part of a 130-person pilgrimage that visited the Holy Land before arriving in Rome for the Pentecost celebrations.

The trip was George’s first with charismatics and he was enthused. “This is what we need to reinvent the church,” he said. Getting people excited about the faith is what is needed if “we want the church to get straightened out and stop losing people,” he said.

Mroz said, “We receive baptism as babies and then we’re confirmed,” but so many people experience the sacraments only as “ritual” and are unaware of the power the sacraments hold. The charismatic renewal “reawakens those gifts you received at baptism and confirmation. Until you get the Holy Spirit, you don’t get this reawakening. That’s what it is — a reawakening of the gifts given you before.”

NEXT: Mercy toward others implies taking risks, suffering, pope says