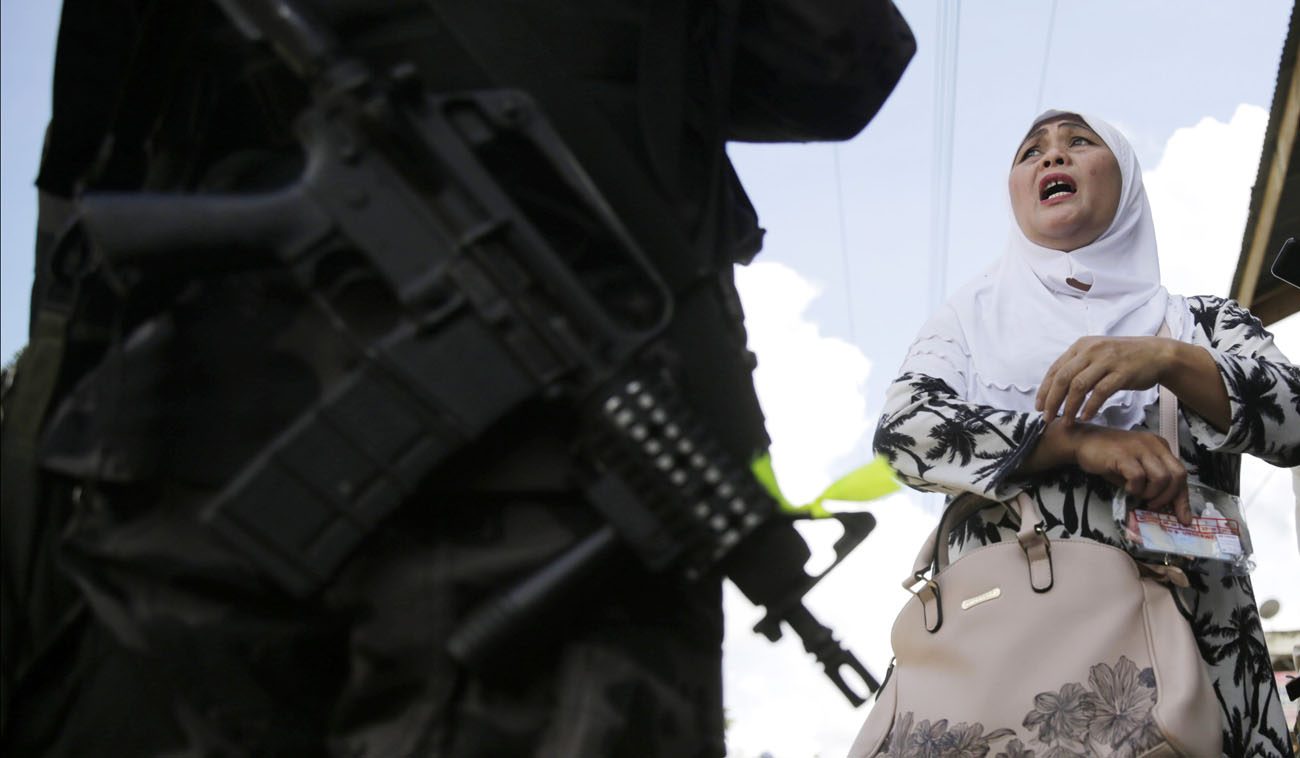 A Filipino woman speaks to a soldier at a checkpoint in Marawi, Philippines, June 1. People started to evacuate the town after President Rodrigo Duterte imposed martial law across the entire Muslim-majority region of Mindanao. (CNS photo/Francis R. Malasig, EPA)

MANILA, Philippines (CNS) — The Association of Major Religious Superiors in the Philippines called for an end to martial law in Mindanao, saying that it is “not the proper response to terrorist attacks in just one city on a vast island.”

“The declaration of martial law is an extreme measure, and based on the reports we have received … is a reaction disproportionate to the situation,” said the statement issued June 6 by the influential organization.

The association encompasses the superiors and heads of religious congregations that run most of the country’s top universities and institutions.

Philippine President Rodrigo Duterte declared martial across the southern part of the country after gunmen claiming to have links with the Islamic State group stormed the city of Marawi May 23. The gunmen took several hostages, including Father Teresito Suganob, vicar of the Prelature of Marawi.

The religious leaders called the government’s response in Mindanao “drastic” and maintained that it served to “enhance the perception of power and social impact that the terrorist group aims to achieve locally and internationally,” ucanews.com reported.

The religious leaders said they were “gravely concerned” by the declaration of martial law in Mindanao, explaining that they “reject the strategy of a war on terrorists in the manner that the (government) has been waging the war on drugs.”

“In a war against terrorists, as in the current war on drugs, it is the poor who are the greatest victims, often dismissed as ‘necessary collateral damage,'” the religious leaders said.

Human rights groups reported that nearly 12,000 suspected drug users and peddlers have been killed in the Philippine government’s campaign against illegal drugs.

More than 200,000 people have been affected by the conflict. Many of them have sought shelter outside of Marawi.

The Catholic bishops in Mindanao earlier issued a statement supporting martial law, saying that “at present we simply do not have solid and sufficient facts to absolutely reject the declaration … as morally reprehensible.”

Cardinal Orlando Quevedo of Cotabato, who signed the bishops’ statement, said church leaders in the southern Philippines “are certainly agreed that martial law must be temporary.”

The religious leaders, however, said while they deplore the “violent attacks” of the terrorist group, they also condemn the “equally violent reaction of government troops.”

The association also “deplored malicious attempts by individuals, groups or sectors to portray the Marawi conflict as a religious crisis, pitting Muslims against Christians, when the situation is clearly the result of terrorist acts that have no respect for race or religion.”

The religious leaders said the crisis could be resolved without martial law ruling all of Mindanao.

“Such an approach only blinds the government to the real socio-economic problems in Mindanao, which even President Duterte acknowledges are among the root causes of the crisis,” they said.

The association vowed to extend assistance to civilians caught in the crossfire and focus on what it can do in terms of relief assistance and “in fostering a culture of peace and not hatred.”