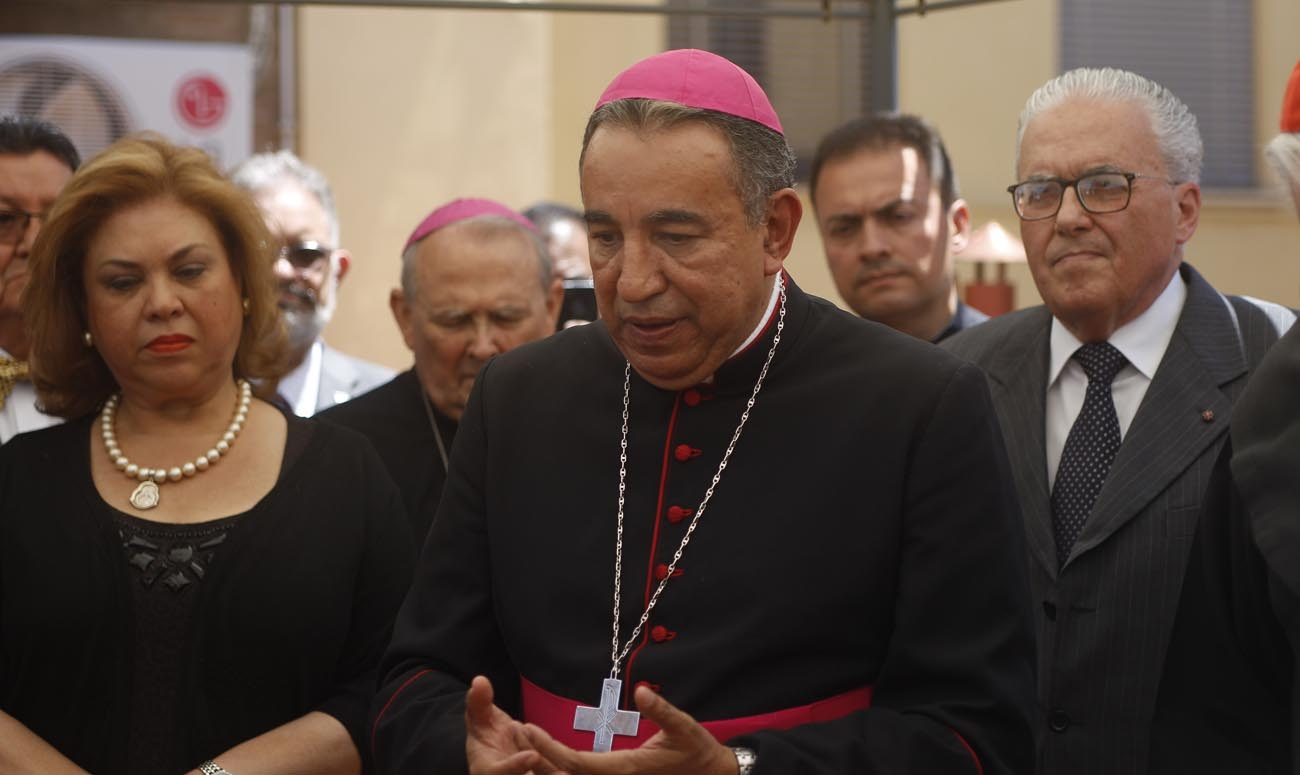 Archbishop Jose Domingo Ulloa Mendieta of Panama leads dignitaries and journalists in a moment of silent prayer June 8 for the One Minute for Peace initiative at a press briefing. The briefing followed the "ad limina" meeting at the Vatican between Pope Francis and the Panamanian bishops. (CNS photo/Junno Arocho Esteves)

VATICAN CITY (CNS) — Preparations for World Youth Day 2018 and the dangers of gender theory on marriage and the family were among the major themes that bishops from Panama discussed with Pope Francis.

Describing the nearly two-hour meeting June 8 with the pope as a “wonderful visit among brothers,” Archbishop Jose Domingo Ulloa Mendieta of Panama told journalists that the pope emphasized the important role that lay people and young men and women have in the church.

Pope Francis “insisted very much that young people are not only the future; they are the present of the church and the present of humanity,” Archbishop Ulloa said.

“What a responsibility to be a young person in this time! Young people are the last breath of fresh air that we have so that hope continues to be renewed in us because a different world is possible thanks to young people.”

Pope Francis met with the 10 prelates from the Central American nation during the “ad limina” visits that bishops are required to make to the Vatican.

“For all the bishops — especially those who had their first experience of an ‘ad limina’ visit — it was a chance to regain strength to continue along the path and the mission that we have in this moment as bishops in each of our dioceses,” he said.

Although preparations for World Youth Day 2019 are still in the early stage, Archbishop Ulloa said that one thing young men and women can count on is the presence of the pope.

During an evening prayer vigil April 8 at Rome’s Basilica of St. Mary Major, Pope Francis said, “I don’t know if it will be me, but the pope will be in Panama.”

Despite concerns that Pope Francis might not make it, the bishops of Panama left the pope’s office “without any worries,” Archbishop Ulloa said.

“We know that Peter (is coming). We want Peter in the person of (Pope) Francis to be at the World Youth Day in Central America, but only God knows,” he said.

Another important issue the bishops discussed with the pope were the challenges that threaten marriage and the family, including the influence of gender theory.

While it is one thing for a person to choose their reality, the Central American prelate said, it is an entirely different circumstance “to impose an ideology.”

Archbishop Ulloa said that gender theory, which argues that male and female characteristics are largely malleable social constructs, is “diabolical” in that “it wants to break a bit with the reality of the family.”

“With respect to other people, we must be clear about the importance of the family according to God’s plan between man and woman,” he said.

Cardinal Jose Lacunza Maestrojuan of David told journalists that although some in Panama regard teaching gender theory and homosexuality in schools as a human right, “from our perspective of faith, this has nothing to do with human rights.”

“The human rights that homosexual people must have are respect to their dignity, their choices and that they are not discriminated against,” Cardinal Lacunza said. “But to go from there to pushing so that society should accept those choices as something good, desirable, digestible and that it is taught to little children, we are not willing to go there.”