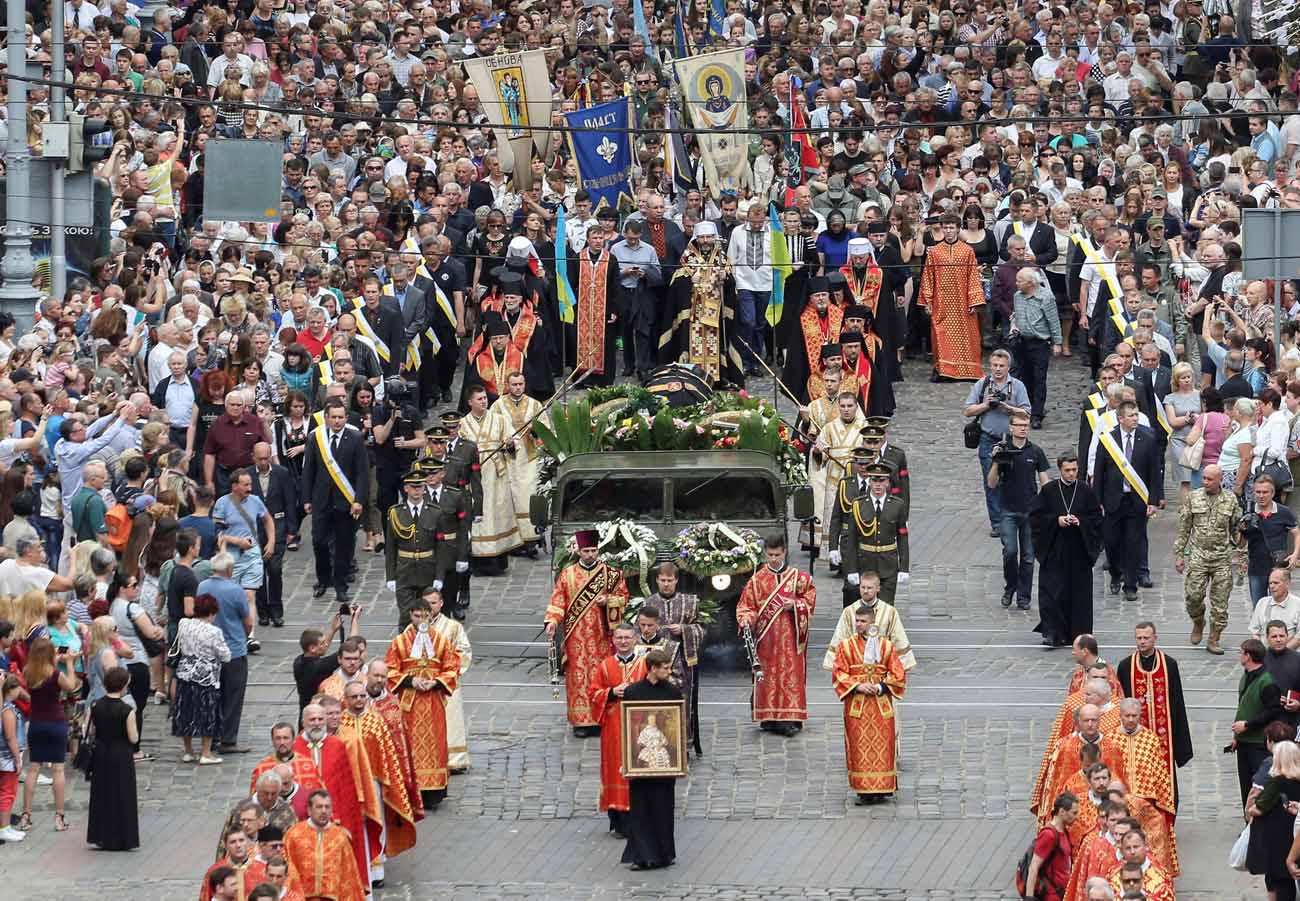 Mourners accompany the body of Ukrainian Cardinal Lubomyr Husar in a procession through the streets of Lviv June 3 before his body was returned to Kiev for his June 5 funeral Mass and burial. Cardinal Husar died May 31 at the age of 84. (CNS/Roman Baluk, Reuters)

VATICAN CITY (CNS) — Saying he was moved by reports of tens of thousands of people gathering for a funeral procession for Ukrainian Cardinal Lubomyr Husar, who died May 31, Pope Francis sent a second message of condolence to the cardinal’s successor.

Being grateful for Cardinal Husar’s “unique, religious and social presence in the history of Ukraine, I invite all of you to be faithful to his constant teaching and total abandonment to providence,” the pope wrote June 5, the day of the cardinal’s funeral in Kiev and two days after the massive procession in Lviv.

“Continue to feel his smile and his caress,” Pope Francis wrote to Archbishop Sviatoslav Shevchuk of Kiev-Halych.

Addressing the major archbishop of the Ukrainian Catholic Church as “Beatitude,” the pope said he had been informed of “the extraordinary influx of people who came in these days to pay homage to the mortal remains of the cardinal.”

“This presence is an eloquent sign of who he was: one of the highest and most respected moral authorities of the Ukrainian people in recent decades,” the pope said.

Pope Francis, who knew Archbishop Shevchuk when both were bishops in Argentina, also offered his personal condolences to the archbishop “to comfort you in the loss of one who was a father and spiritual guide to you.”

Huge crowds gathered outside St. George’s Cathedral in Lviv, the one-time seat of the Ukrainian Catholic Church, for the funeral procession. They watched a video of the cardinal speaking about the church and faith, and then thousands of them set off through the streets of Cardinal Husar’s hometown, stopping occasionally for Bible readings, prayers and musical tributes.

With his coffin placed on an artillery gun carriage laden with flowers, the procession through Lviv last two hours. Government officials and representatives of other churches also joined the procession.

Pope Francis said he knew Cardinal Husar was a father for the entire Ukrainian Catholic Church and that he “gathered the inheritance of the ‘catacombs'” where the church was forced to live for four decades under communism.

The cardinal not only gave the church back many of its structures, but he gave it “especially the joy of its history founded on faith through and beyond every suffering.” 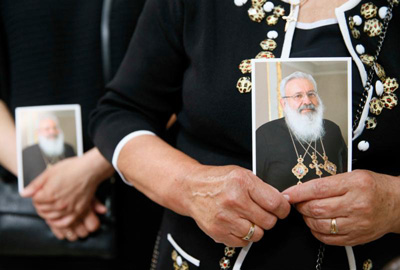 A woman holds an image of Ukrainian Cardinal Lubomyr Husar during his June 5 funeral Mass at the Patriarchal Cathedral of the Resurrection of Christ in Kiev. Cardinal Husar died May 31 at the age of 84. (CNS/Valentyn Ogirenko, Reuters)

When old age and bad health led him to resign in 2011, the pope said, “his presence among the people changed style, but, if possible, became even more intense and richer.”

His reflections and talks, shared on television, the radio and through his blog, showed him to be a “master of wisdom. His speech was simple, understandable to all, but very profound,” the pope said. “His was the wisdom of the Gospel, it was the bread of the word of God broken for the simple, the suffering and for all those who were searching for dignity.”

Whether they were Catholic or Orthodox, believers or unbelievers, the pope said, when people heard Cardinal Husar speak they heard “a Christian, a Ukrainian passionate about his identity, always full of hope and open to God’s future.”

“It moves me to think that today all of Ukraine is mourning him, but also that many are certain that he already is resting in the embrace of the heavenly father” and will continue to pray for Ukraine, which still is suffering from the “violence and insecurity” of the Russia-backed fighting in the East.

PREVIOUS: Pope calls for month of prayer to renew passion for missionary outreach