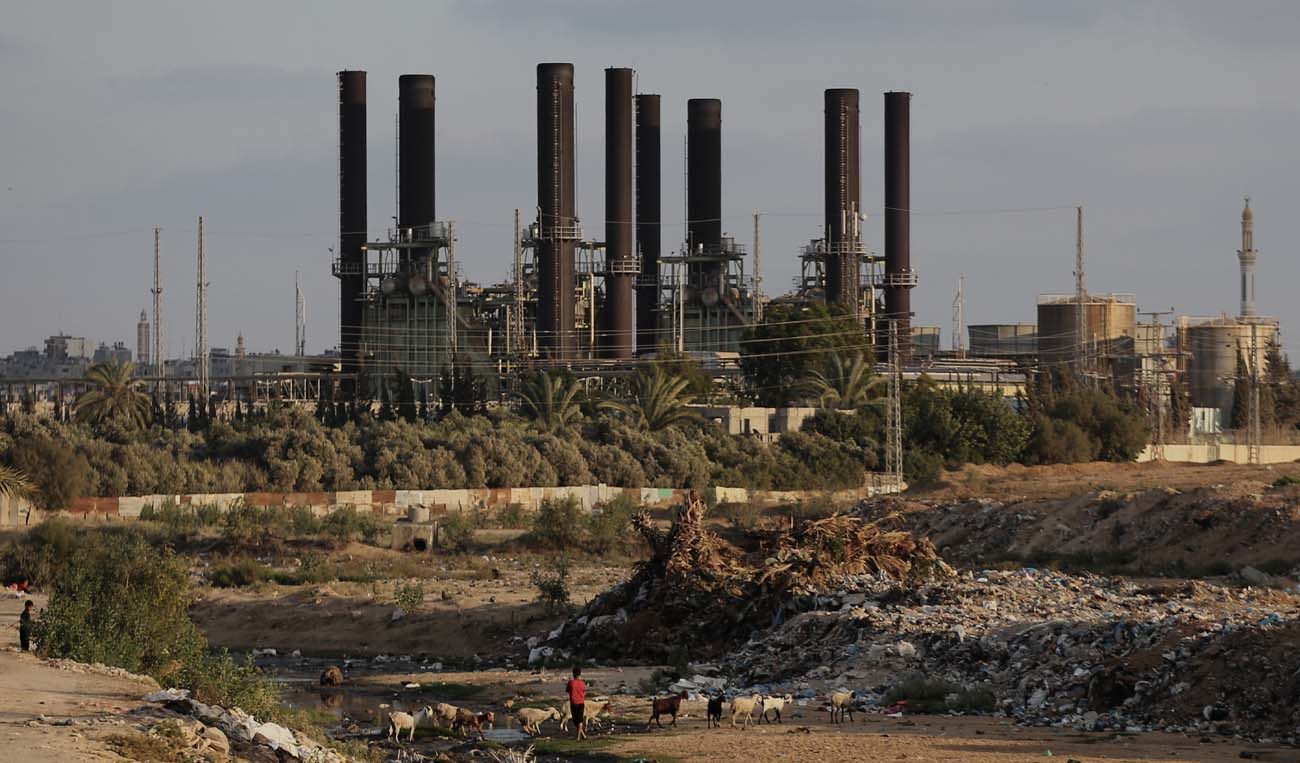 The power plant that generates electricity in the central Gaza Strip is seen June 14. Electrical service is sporadic because of political maneuvering among Palestian groups and the Israeli government, forcing residents to be resourceful in coping in their daily life. (CNS photo/Mohhammed Saber, EPA)

JERUSALEM (CNS) — Gazans demonstrate an “inspiring” resilience and resourcefulness and more importantly, a sense of hope, despite the daily hardships they face, said the regional director for Palestine and Israel of the Catholic Near East Welfare Association.

The hardships are many, ranging from a lack of dependable electrical service to a shortage of potable water at times. Through it all, people persist, going about their lives as best as they can, CNEWA’s Sami El-Yousef told Catholic News Service.

“It shows you how you can live on so little and still continue to have a ray of hope that life will get better. It is inspiring,” said El-Yousef, who was in Gaza at the end of May. “They laugh at the situation they are in and find little achievements which give them satisfaction.”

Electrical service is sporadic because of political maneuvering over tax payments among the Hamas Palestinian faction that has ruled Gaza since 2007, the Western-recognized Fatah Palestinian leadership in the West Bank, and the Israeli government. Gaza residents receive just more than three hours of electricity a day, down from the already low eight hours of service they had been receiving before the energy crisis began two months ago.

Hamas also has not used the payments collected to renovate the outdated electrical infrastructure, which sustained damage from past Israeli military strikes and the 10-year-old Israeli blockade.

Egypt sent truckloads of diesel fuel for Gaza’s power plant, June 21, easing the crisis for at least a few days.

Beyond the shortcomings of the electrical system, sewage treatment plants are no longer working and raw sewage spews into the Mediterranean Sea and seeps into Gaza’s already depleted natural water aquifer, El-Yousef said.

George and Nisreen Anton and their three children under the age of 6 still manage to get by. The Catholic family scrambles to get the cooking and the laundry done in the short time electrical service is available. At times, the electricity comes on in the middle of the night.

“We are stressed all the time and become nervous. We need to live a normal life and I don’t know how to do that. We are living in 2017, everything is electric,” Nisreen Anton said in a telephone interview.

A noisy generator that spews acrid fumes provides the family with just enough electricity to light their home in the evening and watch a bit of television, she said.

“If you try to take a walk in the market all the shops have (generators) working on diesel gas so you can imagine the smell and the noise,” she explained. “The three sides are (blaming) each other and we are suffering from them all. No one thinks of us. We are here with Hamas leaders … and they have electricity and normal people don’t have. We are paying them and we don’t have electricity.”

Despite the cutback in hours of electrical service, Nisreen said the family’s monthly electrical bill has increased from $25 to $840 a month.

George Anton spends several hours each day going to shops to bring back fresh food because they can no longer use the refrigerator.

For families with ill members at home, it is especially difficult to keep medical equipment in operating. Hospitals, too, are threatened with electrical shortages and stoppages despite the use of generators, endangering patients’ health.

Yet, El-Yousef said, signs of hope exist. CNEWA has implemented a renewable energy plan with the installation of solar panels on the roof of the Ahli Arab Hospital. The system, which went online in April, will provide enough power for the hospital to function without disruptions.

Another program funds the creation of a new solar panel technician course for 60 students at the Near East Council of Churches vocational training center. The two-year program welcomes its first students in September. Once trained, the students will be among technicians to meet the growing need for service solar panel systems, El-Yousef said.

“The solar panels will make a huge difference in the life of the hospital. They can run their operating room, the emergency room and the outpatient clinics on solar energy,” he explained.

Even if Egypt, Israel and the Palestinian National Authority find a way to resolve the energy crisis it will take an as long as four years before the infrastructure is upgraded.

CNEWA has also donated solar panels to 15 of the neediest Christian families.

Gaza’s three Catholic schools are undergoing renovations that are being funded by various grants, El-Yousef said. The Latin Patriarchate School is in the last phases of construction, which, once completed, will allow the staff to expand class offerings, El-Yousef said.

Elsewhere, Holy Family School, another Latin Patriarchate school, was to add an additional floor that will accommodate more students and improve in the quality of education. The expansion will allow for the addition of kindergarten classes.

Finally, construction of a new building at the Rosary Sisters School began in May and is expected to be completed by January. The project will include new classrooms and a large indoor auditorium. Plans call for expanding the school to include 11th and 12th grades and to offer a college preparatory curriculum.

The Greek Orthodox Cultural Center is building a second floor for a conference center and meeting rooms under a Saudi Arabian grant. New furnishings and equipment also part of the project in the existing center.

The center also can be used as a wedding hall and performance art center, bringing some normalcy to Gazans, El-Yousef added.

“We come to Gaza and meet the people, and are able to really do very little things for them but they are so appreciative of the fact that they are not forgotten,” he said. “People continue to think that Gaza can’t remain as it is. They continue to hope that the future will be better.”

PREVIOUS: Quebec cardinal to Catholic media: Strength of the message is God