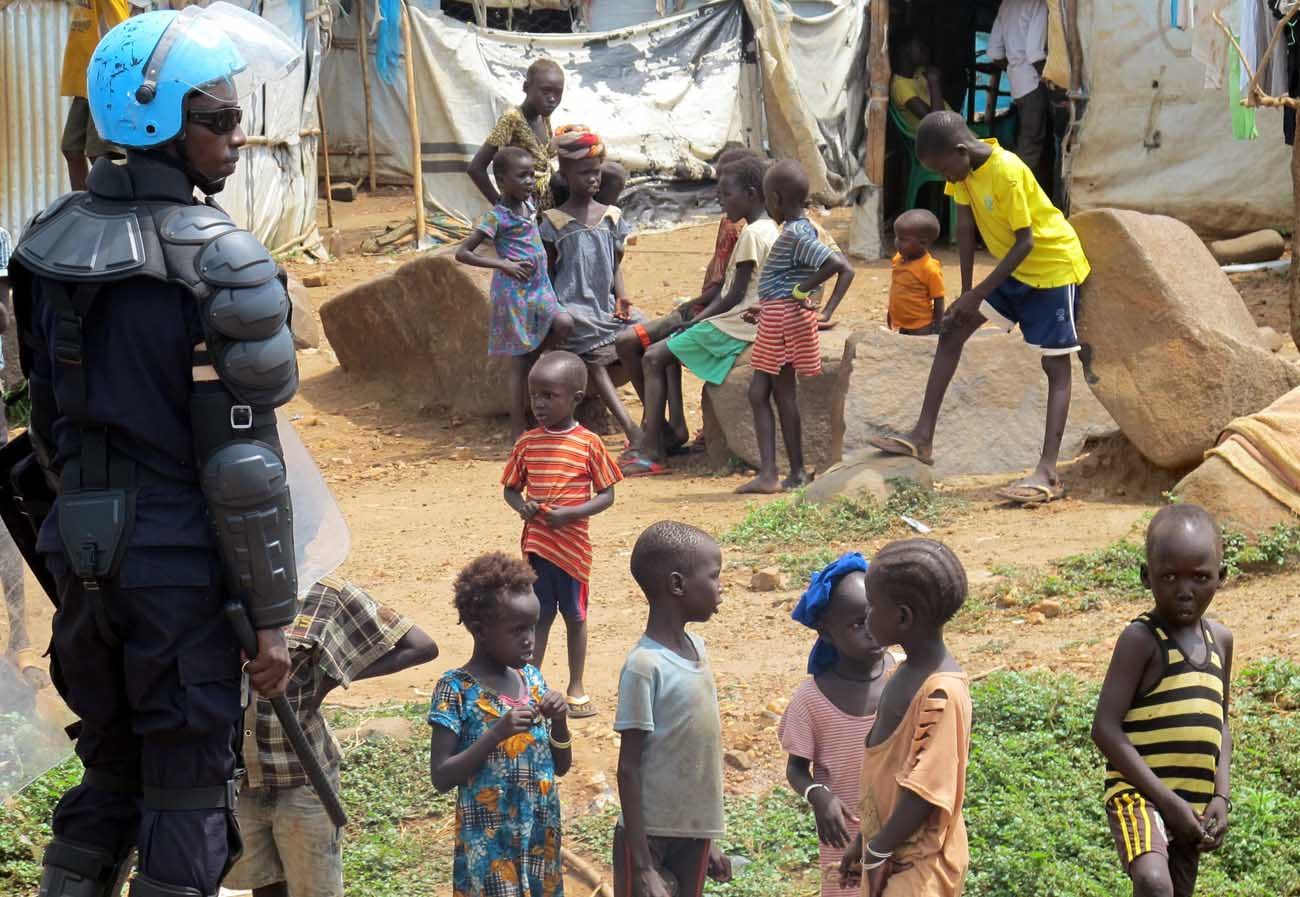 A U.N. peacekeeper keeps watch as children gather in a camp for displaced civilians in Juba, South Sudan. The heads of the member churches of the South Sudan Council of Churches criticized the country's political leaders "on all sides" for placing political and personal interests above the needs of ordinary people. (CNS photo/David Lewis, Reuters)

JUBA, South Sudan (CNS) — The heads of the member churches of the South Sudan Council of Churches criticized the country’s political leaders “on all sides” for placing political and personal interests above the needs of ordinary people, which they said has led to economic decline, famine and ongoing violence.

The council, including Archbishop Paulino Lukudo Loro of Juba, charged that the country’s problems are “man-made, a result of mismanagement, blatant corruption, insecurity, lack of governance and the rule of law.”

“Greed, hatred and the struggle for power have left the ordinary people of South Sudan, on all sides of the conflict, as the losers,” the council in a statement June 23 at the conclusion of a meeting in Addis Ababa, Ethiopia.

While welcoming the creation of a forum for national dialogue late in 2016 by President Salva Kiir, council members said that, for the effort to succeed, specific criteria for discussion must be met. They lamented that the attempt at dialogue has gone unaccepted by opposition parties.

In the statement, the church leaders said they were speaking solely as religious leaders and that, because they were not politicians, they could not give “detailed political recommendations.”

“As pastors and shepherds, our first priority is the suffering of our people,” they said.

“Nevertheless, we dare to speak to political leaders as Jesus instructed us, ‘like sheep among wolves … as shrewd as snakes and as innocent as doves,'” the statement said.

South Sudan became independent from Sudan in 2011 after decades of war. But just two years after independence, political tensions erupted into violence and abuses. The fighting, displacement, insecurity and drought have led to large-scale hunger and malnutrition across the country. It’s estimated that 3.8 million people have been displaced and at least 28 million are in need of food aid. Tens of thousands have died in the violence.

A trip to South Sudan by Pope Francis and Anglican Archbishop Justin Welby of Canterbury this year was indefinitely postponed in mid-June over security concerns. Because of the postponement, the pope sent nearly $500,000 to two church-run hospitals in the country June 21.