Spanish victim of London attackers recalled for commitment to justice 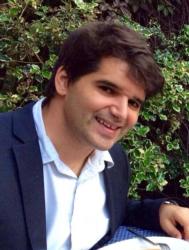 Ignacio Echeverria, 39, of Spain, is pictured in an undated family photo in Madrid. (CNS photo/Echeverria family via Reuters)

MANCHESTER, England (CNS) — The Spanish government paid tribute to a Catholic man stabbed to death as he used his skateboard to try to defend a woman from a knife-wielding terrorist in London.

Ignacio Echeverria, 39, native of Spain working in London for a year, was one of eight victims of three assailants who drove a van into pedestrians on London Bridge before they attacked people randomly with knives and machetes in nearby Borough Market the evening of June 3.

The Spaniard, a Catholic and the nephew of a deceased bishop, was returning from a skateboard park when he stumbled upon the atrocity and saw one of the terrorists repeatedly stabbing a woman.

Witnesses have reported that Echeverria used his skateboard as a weapon against the terrorist before he was fatally wounded himself.

The Spanish government said in a statement that Echeverria’s relatives and friends “are not alone in their pain, and that, today, Spain is with them, sharing their feelings and desolation and joined with them in this terrible moment.”

“The exemplary attitude shown by Ignacio Echeverria during the attacks is a demonstration of solidarity for all to see,” said the statement posted June 7 on the government’s official website.

“His bravery in defending a helpless person serves as a reminder of the need to remain united before the scourge of terrorism, facing up to those whose only language is one of violence and terror,” it said.

The statement added: “The government believes strongly that unity among democrats can overcome many challenges, including terrorist madness.”

Prime Minister Mariano Rajoy Brey of Spain suggested on social media that the Silver Cross of the Order of Civil Merit should be awarded posthumously to Echeverria, who came from Las Rozas, near Madrid.

The Las Rozas City Council, which called for two days of mourning, also indicated it will bestow a medal of honor posthumously on Echeverria and open a new park with a skateboard arena in his name.

Echeverria moved to London a year ago to work in money laundering prevention for HSBC Bank.

Spanish media reported that Echeverria was the nephew of Bishop Antonio Hornedo Correa, the late bishop of Chachapoyas, Peru, and was described by friends as being devoutly religious himself.

His brother, Joaquin, told El Mundo, a Spanish newspaper, that Echeverria “was a religious man” who never missed Mass on Sunday.

He had also belonged to a group of young Catholics who met weekly in Madrid, the newspaper reported.

Friends described Echeverria as courageous with a strong sense of justice and a desire to serve the weakest.

One of his friends, Rafael Duarte, who worked with him at Banco Popular Espanol, told El Mundo that Echeverria was “humble, upright and very ethical.”

Another friend recalled how Echeverria once risked his own life to rescue a friend struggling against sea currents off San Vicente de la Barquera, Spain.