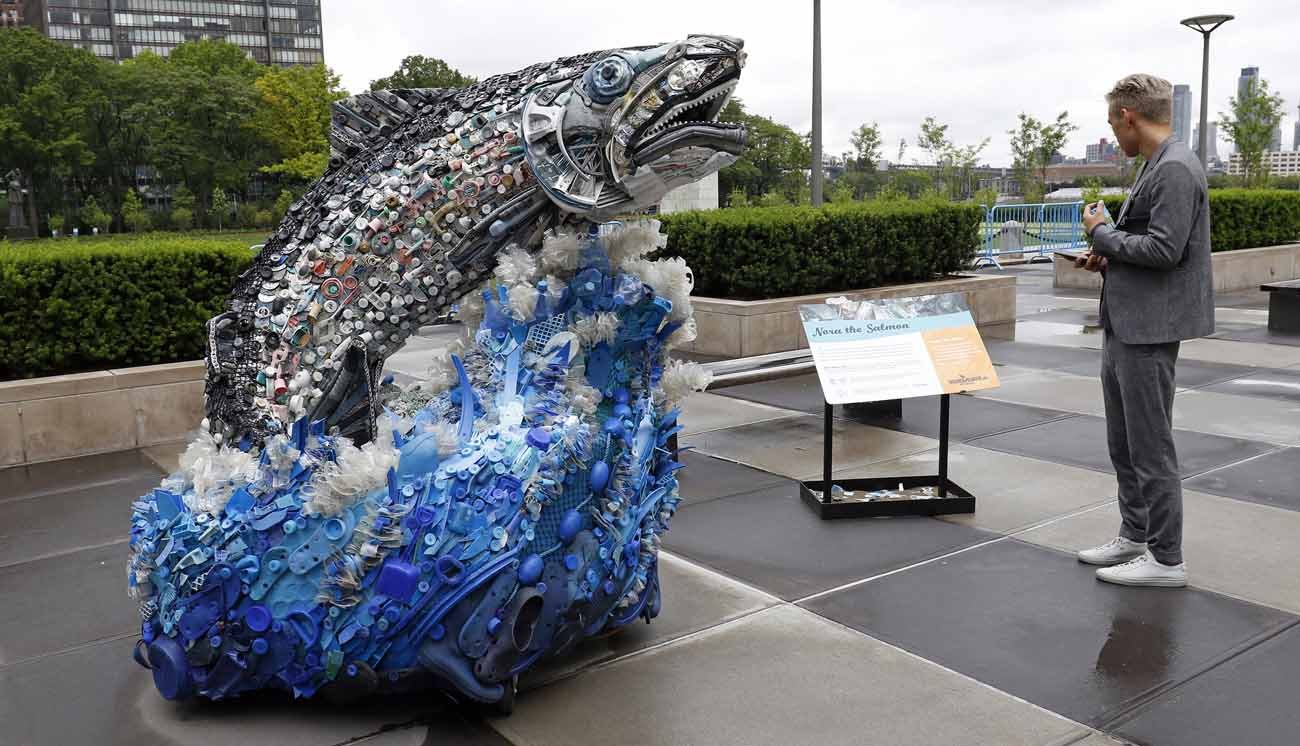 A salmon sculpture created from marine debris is seen outside U.N. headquarters in New York City June 6. The artwork was being displayed during the U.N. Ocean Conference June 5-9, an event coinciding with World Oceans Day June 8. (CNS photo/Gregory A. Shemitz)

UNITED NATIONS (CNS) — If left unchecked, warming, pollution, and acidification of the world’s oceans will have drastic socio-ecological consequences, particularly for people who depend on the water for their livelihoods, according to speakers at the June 5-9 Ocean Conference at the United Nations.

The conference drew more than 3,500 participants representing countries, U.N. agencies, intergovernmental and nongovernmental organizations, and the private sector. They examined myriad human threats to the oceans and sought to mobilize urgent and tangible action to reverse the observable cycle of ocean decline.

Speakers repeatedly noted that billions of the world’s people depend on the oceans for their main source of food and millions of others draw their livelihood from the seas. Tourism, trade and other major economic activities depend on healthy oceans, they said.

Oceans cover 72 percent of the earth’s surface and serve as the primary regulator of the global climate. They supply one-half of the oxygen people breathe and absorb one-third of the carbon dioxide they produce, as well as almost all of the excess heat.

Ghanaian Cardinal Peter Turkson led a Vatican delegation to the conference and spoke at four events. He is prefect of the Dicastery for Promoting Integral Human Development.

At the “Partnership Dialogue on Minimizing and Addressing Ocean Acidification” June 6, Cardinal Turkson said growing carbon dioxide emissions increase the acidity of oceans. “If these present trends continue, this century may well witness an unprecedented destruction of ecosystems, with serious consequences for all of us,” he said.

The cardinal said the Vatican frames its perspective and action to minimize and address ocean acidification and other environmental issues on interconnected guiding principles described in “Laudato Si’,” Pope Francis’ encyclical letter. It is a moral imperative to take care of the environment, which is a gift entrusted to our responsible stewardship, he said.

“Much of the decline in the health of the oceans is a result of emphasizing rights and autonomies to the detriment of personal and collective responsibilities. Effective regulatory frameworks to safeguard the health of our oceans are often blocked by those who are profiting most from marine resources and who are intent on maintaining or increasing their advantages to the detriment of the poorer peoples and countries,” Cardinal Turkson said.

“Ethical considerations must be integrated in our scientific approaches to environmental issues, because environmental deterioration and human and ethical degradation are closely linked,” he said. “Science can quantify the acidification of oceans, predicting its negative consequences and proposing remedies, but is cannot provide the motivation for virtuous action. Technical solutions are never enough.”

Prince Albert II of Monaco co-chaired the session on ocean acidification. He urged participants to implement holistic local and global initiatives that focus on prevention of acidification and creation of protected marine areas.

Speakers supported the Paris climate agreement. Petteri Taalas of Finland, secretary-general of the World Meteorological Organization, said countries that signed the accord were not moving fast enough to meet their carbon dioxide emission and temperature-reduction targets, although he acknowledged the targets are ambitious.

Bjort Olafsdottir, Iceland’s minister for the environment and natural resources, said the recent decision by the United States to withdraw from the Paris accord was “deeply disturbing,” but she celebrated that U.S. “states and cities are still standing strong to achieve the goals.”

Panelists and other speakers at the three-hour session described the science associated with ocean acidification and said the most important step is mitigation through reduction of greenhouse gasses and protection of so-called blue carbon, which is the carbon captured and stored in oceans and coastal ecosystems.

Rahanna Juman, deputy director of the Institute of Marine Affairs for Trinidad and Tobago, said small-island developing states such as hers are particularly vulnerable to the impacts of climate change. “We have to adapt to rising sea levels, because we have nowhere to move,” she said. Yet despite its importance, ocean acidification is not seen as a priority because the impact from storms and coastal erosion is more apparent, she said.

Exhibitors attracted the attention of conference participants with artwork and virtual reality experiences that underscored the tangible presence of pollutants and debris in the oceans.

On the broad esplanade outside the U.N. Secretariat building, there were depictions of various fish constructed entirely of plastic and metal pieces found floating in the seas. Visitors also waited for an opportunity to use a virtual reality headset to tour the oceans from the perspective of a marine animal or an oceanographer, “bumping” against debris and shining a spotlight on colorful underwater scenes.

At the end of the conference, member states were expected to adopt a “Call of Action,” a concise, focused and concrete commitment to work toward a sustainable future for the oceans.

NEXT: Spanish victim of London attackers recalled for commitment to justice