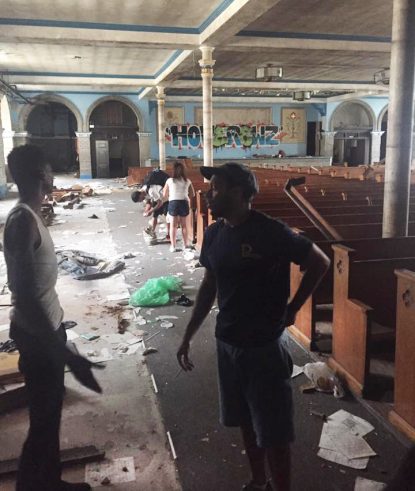 In the lower church of the former Ascension of Our Lord Church in Philadelphia’s Kensington section, addicted squatters talk on a recent morning. (Photo via Facebook)

First in a CatholicPhilly.com series, “The Opioid Epidemic: A Catholic Perspective,” on the drug crisis in communities served by the Archdiocese of Philadelphia.

Philadelphia’s ongoing struggle with opioid addiction has found an epicenter in the Kensington section of the city, where open-air heroin sales, drug usage and overdoses have become commonplace.

In response to public outcry, city officials and law enforcement have intensified patrols of “heroin hotspots” such as McPherson Square Park.

(See our background analysis of the ongoing drug crisis in Philadelphia.)

As a result, many of the area’s addicted and homeless have sought shelter in other parts of the neighborhood. According to Father William Murphy of Mother of Mercy House in Kensington, several people recently took refuge in the former Ascension of Our Lord Church building.

After the parish closed in 2012 due to low membership, the church was relegated to non-religious use by canonical decree and put up for sale.

The property was sold to a real estate investor in 2014 for $800,000 even though it had a market value of $3.5 million – yet it needed at least $3 million in repairs, according to the Archdiocese of Philadelphia.

Human suffering in a ‘haunting’ church

The sale was one indicator of how far Ascension Church, which at one time was one of the largest in the city, had declined. The same could be said of its working-class neighborhood that today is one of the city’s most troubled.

It is also the mission field for the unique Mother of Mercy House, a Catholic neighborhood outreach launched in 2015.

Father Murphy, who staffs Mother of Mercy along with Sister Ann Raymond Welte, I.H.M., and Father Joseph Devlin, said that he learned of the addicts’ new shelter from a tip.

So many addicts were in the church that “it looked like they were waiting for Mass to start.”

Father Murphy and Sister Ann decided to visit them as part of Mother of Mercy’s regular “neighborhood walks,” an evangelization effort that “lets people know that Mother of Mercy House is here, the Catholic Church is here, and we’re present in case anyone would want to stop by,” said Sister Ann.

(Listen to the team at Mother of Mercy House discuss their ministry in a CatholicPhilly.com podcast.)

During the walks, the Mother of Mercy team gives out snacks, information cards and words of encouragement. 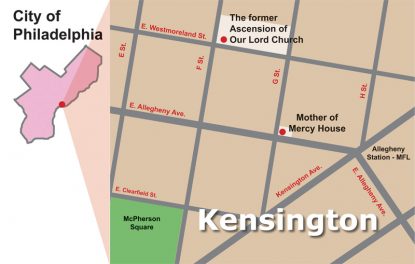 The Kensington area of North Philadelphia served by Mother of Mercy House, a Catholic neighborhood outreach launched in 2015 after the closure of Ascension of Our Lord Parish in 2012. (Graphic by Barbara Hagan)

But the visit to those sheltering in the former Ascension Church left both Father Murphy and Sister Ann almost speechless.

“There was something haunting about it,” Father Murphy said. “The people were in a daze. You could see the drug paraphernalia; it smelled of urine and what not.”

Those inside the former church were surprised to see the priest and the nun in full religious garb, but they were receptive to the unexpected pastoral visit.

“One guy actually said, ‘Oh no, you’re not taking the place back, are you? You’re not gonna make it a church again?’” said Father Murphy. “They were actually glad to show us around.”

The priest and sister attempted to learn more about those souls who were sheltering in the former “cathedral of Kensington,” where city workers in recent days sealed up entrances to the crumbling structure.

While some drug users were so high that “couldn’t have had a coherent conversation,” Father Murphy recalled “there was one gentleman who really talked to us. He did admit that he was addicted. He had had some clean time but was back in the addiction.”

The man asked his visitors for prayers to conquer his devastating habit.

The team at Mother of Mercy — which was created as a “storefront” church to enhance the archdiocese’s pastoral presence after Ascension’s closure — understands that pain.

“This is such a complex problem, and it’s really going to take a lot of people putting their heads together to help solve it,” Father Devlin said. “The root causes aren’t being addressed.”

Combating evil in a spiritual vacuum

Among those causes, which include physical, psychological and emotional factors, is the spiritual aspect that is often overlooked, Father Devlin believes.

“There’s a spiritual vacuum, a hopelessness that sets in very quickly,” he said. “The addiction cuts someone off from God. They give up hope, they become entrapped. Part of this is the face of evil, particularly in the young who have had opportunities and where they were on a path to thrive, and the addiction just devastates them and leads them down a dark road. They’re really on a collision course racing to a brick wall, and I personally see that as evil at work.” 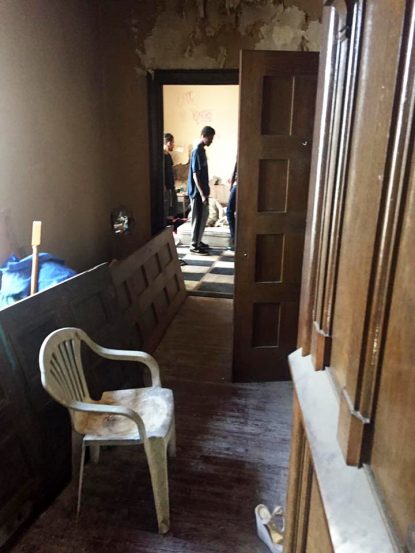 People walk through rooms in the former Ascension of Our Lord Church, which was closed in 2012 and sold in 2014. (Photo via Facebook)

Opioid addiction entails a mixture of sin and sickness, the pastoral team of Mother of Mercy House believes, requiring both a spiritual and a physical response.

In their efforts to minister to Kensington’s addicts, the team first tries to meet their immediate needs including food and water. What results is a personal relationship that can be built upon.

“I just had a gentleman the other night, and I offered to take him to detox. I wouldn’t be able to do that if I hadn’t seen him those other times,” Father Devlin said.

Among addicts, an openness to prayer

“You will find an openness among the addicted for prayer and blessing,” Father Devlin said. “If we can bring people to God, that power of Jesus — once they admit their powerlessness, they can be freed from this addiction.”

That admission is the first step in the recovery process, and Mother of Mercy House offers 12-step meetings (Alcoholics Anonymous and Narcotics Anonymous) every Wednesday at 7 p.m.

“The 12-step program uses the terminology ‘higher power,’” said Father Devlin. “But as a Catholic priest, I know who that higher power is, and that is Jesus Christ.”

Despite the scope of the problem, the Mother of Mercy team sees Philadelphia’s opioid addiction crisis as an opportunity to manifest the restorative power of Christ’s love.

“There is a way out, there is hope, particularly in this type of situation,” Father Devlin said. “Jesus can free them of this addiction.”

The grace of the sacraments, prayer and compassion are essential to bring healing, the pastoral team believes.

“And also, not to judge, since addiction could happen to any one of us or to any member of our family,” Sister Ann said.

NEXT: How we got here: Ancient painkillers lead to new epidemic