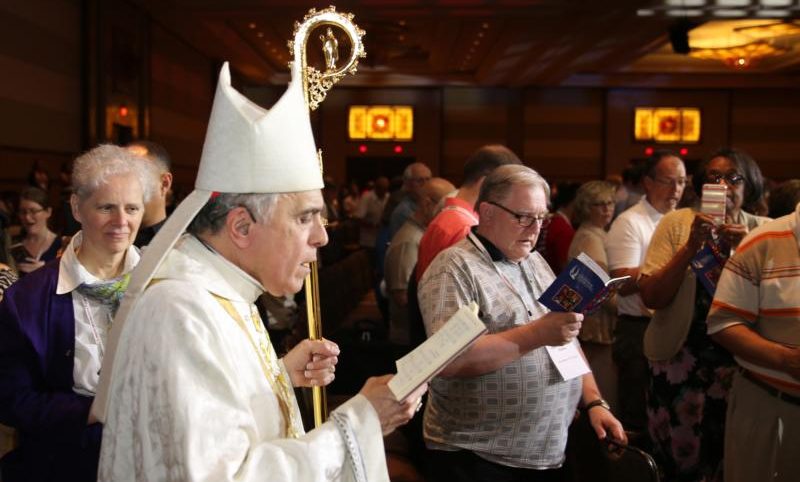 Cardinal Daniel N. DiNardo of Galveston-Houston, president of the U.S. Conference of Catholic Bishops, process with other prelates during the closing Mass July 4 at the “Convocation of Catholic Leaders: The Joy of the Gospel in America” in Orlando, Fla. (CNS photo/Bob Roller)

ORLANDO, Fla. (CNS) — Jesus took a few loaves and fishes and turned them into a feast for thousands, offering the church an example of faith in action, Cardinal Daniel N. DiNardo of Galveston-Houston said in sending 3,500 delegates home from the “Convocation of Catholic Leaders: The Joy of the Gospel in America.”

In the face of adversity and naysayers in today’s world — not unlike the apostles who wondered how they would feed the masses — the church is called to take what they have, as Jesus did and reap the rewards of achieving great things in the face of the impossible, Cardinal DiNardo said in his homily during the convocation’s closing Mass July 4.

“When we see the complexity, when we see the impossible … Jesus will say, ‘Just give me what you have.’ Imagine what we will have left over after we do it at the Lord’s word,” he said.

“Jesus gives the apostles and everybody who listens to them … he gives them that power. Do we believe? St. Paul says if we believe can go out and do what is asked,” said Cardinal DiNardo, who is president of the U.S. Conference of Catholic Bishops.

Citing the Gospel reading from John (17:11, 17-23), the cardinal also urged the delegates to reflect on how Jesus during the Last Supper reminded the Twelve Apostles that he will pray for all who believe he is the savior that they may be united in one family under God.

Such is the call of the church, he explained, as the delegates returned home — to unite people together by going to the peripheries of society and sharing the good news of Jesus through action rooted in faith.

“Sisters and brothers, we are in a very, very significant time in our church in this country,” Cardinal DiNardo said. “John 17 today reminds me of how contemplative we’re going to have to be if we are going to be active. Never are you more active than when the word of God is so recalled by you. You are seated there in God’s loving grace, and when you are seated there, you realize how much God blesses you.”

The cardinal urged the delegates to engage in their ministry humbly and to realize that they are nourished in their work through the body and blood of Jesus at Mass.

“We leave here (at the altar) nourished and refreshed and we go and do what we have to do,” he said.

As the Mass ended, Archbishop Christophe Pierre, apostolic nuncio to the U.S., congratulated convocation participants for a lively and invigorating four days. He recapped the keynote presentations, reminding the delegates what they can do in their communities, much like the apostles, to “give comfort and peace to the wounded.”

“We are journeying together in the common bonds of the journey of faith,” said the archbishop who attended the entire four-day conference that opened July 1.

“This is a ‘kairos’ moment” in the life of the U.S. church, he added, calling people to share “by the witness of your lives” by being missionary disciples, as Pope Francis calls the faithful to be.

Archbishop Pierre also said in his upcoming report to the pope that he would explain that “the Spirit is alive in the church in the United States.”

“I will tell him of the commitment of many missionary disciples and their love for the church.”

PREVIOUS: It’s an exciting time to be an evangelist, convocation delegates told

NEXT: For convocation delegates, it’s about unifying in faith in a troubled world