It’s an exciting time to be an evangelist, convocation delegates told 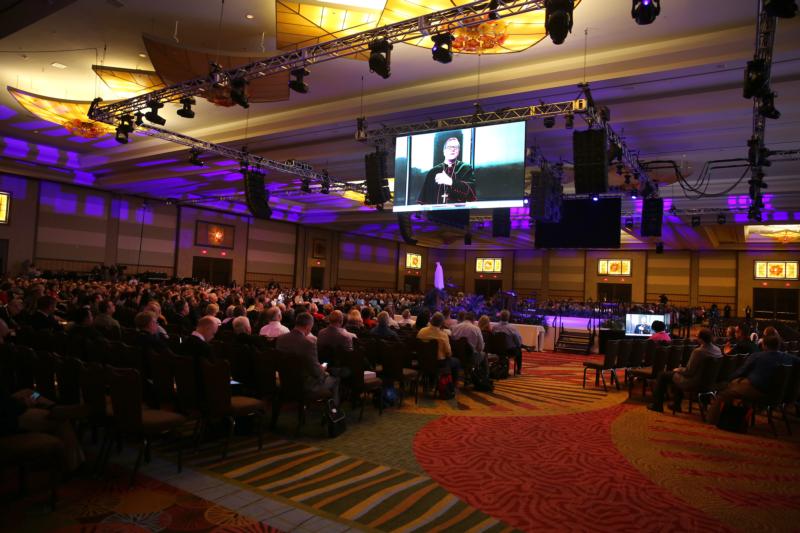 Delegates listen as Los Angeles Auxiliary Bishop Robert E. Barron is projected on a screen July 4 during the “Convocation of Catholic Leaders: The Joy of the Gospel in America” in Orlando, Fla. Leaders from dioceses and various Catholic organizations gathered for the July 1-4 convocation. (CNS photo/Bob Roller)

ORLANDO, Fla. (CNS) — Delegates at the “Convocation of Catholic Leaders. The Joy of the Gospel in America” have their work cut out for them but they are equipped to do it, said speakers at the final plenary session July 4.

“The saints always loved a good fight and we should like a good fight too,” said keynote speaker Auxiliary Bishop Robert E. Barron of Los Angeles.

The bishop, known by many of the delegates for hosting the documentary series “Catholicism” and the website “Word on Fire,” was unable to get to the Orlando hotel where the convocation was taking place because of problems with his flight, so he greeted the crowd through a video hookup.

At the start of his talk, he cited sobering church statistics about the decreasing number of Catholics today that some delegates heard at some of the breakout sessions. For every Catholic who joins the church, six leave, he said, and also the number of “nones” — those who claim no religious affiliation even if they were Catholic — is growing.

The bishop let this sink in and then went straight to encouraging delegates to move forward saying: “It’s an exciting time to be an evangelist.”

A major obstacle challenging Catholics who want to evangelize the modern world is that they are up against as he put it: “a culture of meh,” which is akin to a shrug of the shoulders, or an attitude of “whatever” or anything goes.

He said the way to combat this is to show people the beauty of the Catholic Church in its cathedrals and music, the good works of its people and its great intellectual tradition.

The bishop told the delegates who filled the hall for the final session that those who have heard him over the years know how much he hates “dumbed-down Catholicism.”

“We need to pick up our game intellectually if we are going to evangelize effectively today,” he said, adding that when religion isn’t expressed in a smart way people fall away because “superficial Catholicism is not enough to sustain people.”

Another speaker, Patrick Lencioni, an author and management consultant, gave the delegates plenty of practical information to take home with them stemming from business models that also can be applied to parishes and dioceses.

He told the delegates that the great ideas they bring home with them from the convocation will only succeed if they are working together with their church, diocesan or ministry groups.

He also said if they don’t have holiness or inner peace, “all your efforts to change the world won’t work.”

The business consultant, who co-founded the apostolate Amazing Parish, also told delegates that they had to be willing to face conflicts and challenges. He urged them to hold others in ministry accountable to do their best work, just as one would of a business employee.

And Bishop Richard J. Malone of Buffalo, New York, similarly urged the group to move forward but not in a rushed way. “Let’s take a long view of our work, ourselves, our mission,” he said.

He also urged the convocation delegates to remember they are not required to go forth and do the work of spreading the Gospel message alone.

“We’re not lone rangers,” he said. “We are part of a community. We are there to support each other.”

NEXT: Convocation delegates sent home to imitate Jesus in reaching the margins