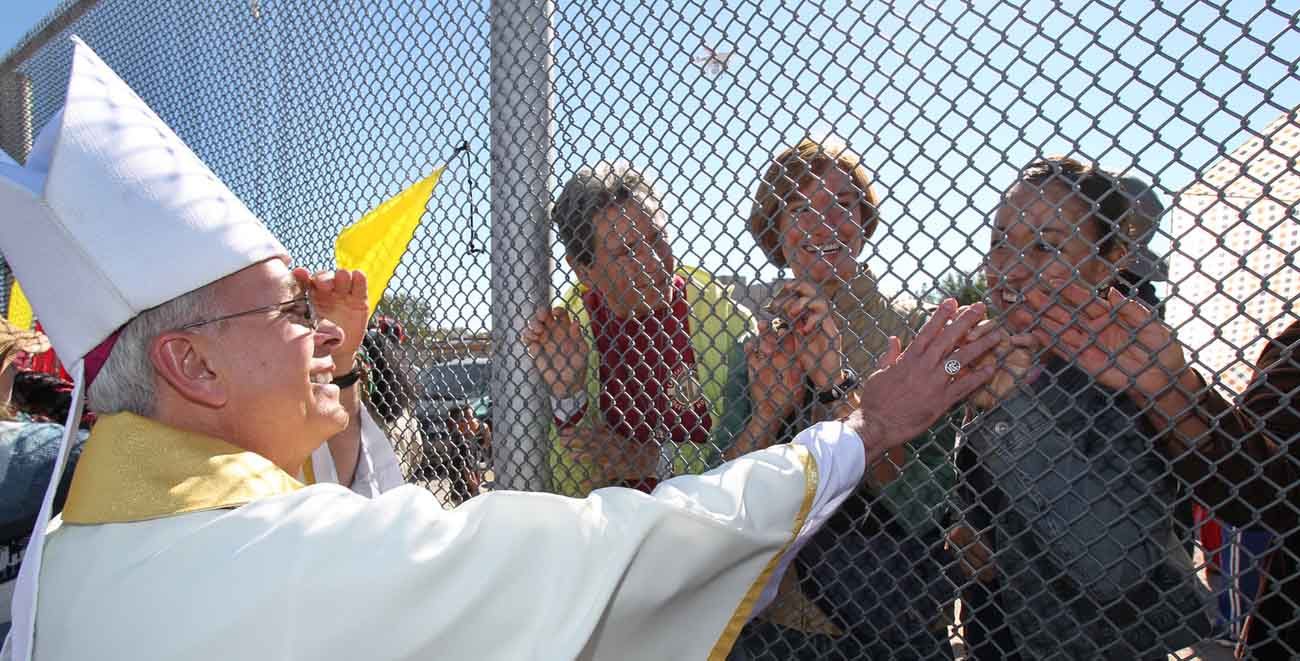 WASHINGTON (CNS) — Following a conversation involving a border bishop and Catholic leaders, migrant advocates from around the U.S. got behind a July 18 pastoral letter issued by the bishop of the Diocese of El Paso calling for a stop to militarization along the border with Mexico and showing compassion for migrants.

El Paso’s Bishop Mark J. Seitz held the conversation, hosted by the Hope Border Institute in El Paso, shortly after the release of his letter on migration titled “Sorrow and Mourning Flee Away.”

Though the letter was addressed to his diocese, it also is addressed “in a special way to our migrant community who are living in a great deal of fear right now, who need to hear that they are not alone, that God is with them, that he can change those dry sands into springs and pools of water and that God can also invite us into union with each other,” said the bishop in a July 18 video conference from Texas.

“Bishop Seitz’s pledge to the people of the Diocese of El Paso to stand with those experiencing anxiety and fear as a result of our country’s broken immigration system may seem simple, but it speaks volumes about where the church stands at this key time for our nation — squarely with the marginalized,” said Christopher Kerr, executive director at the Ohio-based Ignatian Solidarity Network, one of the participating organizations.

During the conversation, Bishop Seitz made a passionate plea for others to understand the real danger that prompts migrants to leave their native lands. He spoke of a parishioner in his diocese in his 30s, a husband and father of two, who had been a successful businessman in his native Mexico until narcotraffickers began extorting money from him.

“It came to the point where he could no longer sustain the payments they were demanding,” the bishop explained. “One day, when he was gathered with friends in a park, some people drove up, threw him in the back of an SUV, used a machete to cut off his legs. He survived that attack and as soon as he was able to, he left with his family and came to El Paso.”

For years, he’s been in the process of seeking asylum after what happened to him, but it has not been granted, he continued.

“What is wrong with a system that would send a man back who has lost both of his legs to the very place where they did that to him? It’s clearly a broken system,” the bishop said.

The current system is one that “forces people to their deaths,” Bishop Seitz said, and the Catholic community needs to respond, particularly by accompanying people in their struggles.

While announcing an educational fund for children of migrant families so they can attend Catholic schools in his diocese, he also spoke of conversations about forming a “rapid response team” in his diocese “so that when a person or (a) family feel threatened, say, there are immigration officers at the door, they can make a phone call and within minutes members of this team can be there to support and help them, not using violence, of course, but just helping to be of service, as a liaison to immigration authorities and also recording what’s taking place.”

The diocese also is asking attorneys to develop a memorandum to instruct pastors on their rights “if immigration officials should come seeking to do some kind of enforcement action at their parish,” he said.

Bishop Seitz said that at the beginning of September, bishops from dioceses surrounding the entire 2,000 miles of U.S.-Mexico border, on both sides, will meet in Piedras Negras, Mexico, which is southwest of San Antonio.

“Obviously, it’s a very significant time for us to be talking about life on the border and the impact of various enforcement actions,” he said.

Sara Benitez, Latino program director for the Washington-based Faith in Public Life, which also participated in the conversation, said she hoped the bishop’s leadership on the topic would “inspire our church to take even bolder steps to defend the dignity of all immigrants and send a clear message to those in power.”

She reinforced the Bishop Seitz’s call to immediately end deportations and detentions until comprehensive immigration reform can come to fruition.

“It’s time to end deportations that are tearing families apart and devastating communities on the border and across the country,” Benitez said to Catholic News Service. “Our church and our country are at best when we respect the human dignity of all.”

The Hope Border Institute hosted the bishop for a breakfast with migrant families before he officially signed his pastoral letter and held the conversation. Dylan Corbett, the organization’s executive director, said that “at a time when migrants and border communities are being held hostage to rhetoric from politicians in Washington, D.C., and unjust immigrant enforcement actions, our faith community is standing up for the gifts and contributions of migrants and the beauty of border communities.”

The institute supported Bishop Seitz “for backing strong community action to push back on a broken immigration system and for his strong message of solidarity with the migrant community in this time of fear,” Corbett said in an email to CNS.

NEXT: U.S. bishops call for permanent protection for young migrants