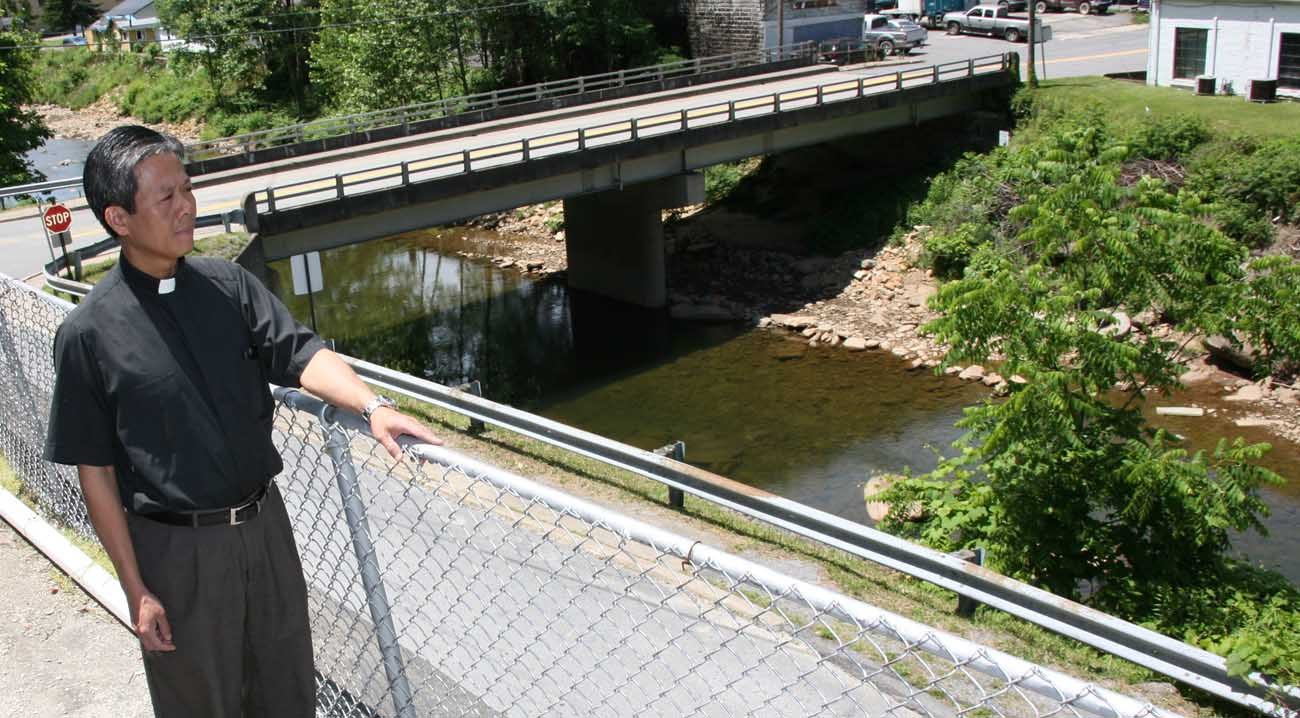 Standing on the grounds of Holy Family Church in Richwood, W.Va., Father Quy Ngoc Dang, parish administrator, gazes upon the now tranquil waters of the Cherry River June 29. Last June, Father Dang watched from the church as the river below overflowed its banks, submerging the bridge pictured and flooding the center of town. (CNS photo/Colleen Rowan, The Catholic Spirit) .

RICHWOOD, W.Va. (CNS) — A year after historic floods devastated parts of West Virginia, “there is still a lot of work to be done,” said Father Quy Ngoc Dang.

The small town of Richwood, where Father Dang is administrator of Holy Family Parish, was devastated by flooding when a total of 7 inches of rain fell in just three hours there on the evening of June 23, 2016.

The Cherry River, which flows just below Holy Family Church, quickly spilled over its banks, ravaged the town of roughly 2,000 residents. Father Dang watched from church grounds last year as the river flooded the center of town.

The flooding was among the worst the state has experienced. Twenty-three people across the state lost their lives. Almost 500,000 people were without power, and 44 counties were under a state of emergency. In addition to Richwood, especially hard hit were the Mountain State’s small towns of Clendenin, Elkview, Rainelle and White Sulphur Springs where homes and businesses were literally ripped from their foundations and washed away. People lost everything.

In the year since the flood, Father Dang, a priest of the Society of the Divine Word, said his town of Richwood has received so much help in recovery efforts from many different organizations, including Catholic Charities West Virginia. However, he said, many flood victims are still in need of assistance.

At the heart of the recovery this past year are the volunteers, Father Dang said, who still come into Richwood every week to help a year later.

“Two groups are working on houses right now,” he said in an interview June 28 with The Catholic Spirit, newspaper of the Diocese of Wheeling-Charleston. Many groups have 20 to 12 volunteers at a time. The largest was a group of 30.

Wheeling Jesuit University has had three volunteer groups in Richwood this year. Students from the University of Notre Dame also came to the town to join the volunteer effort. They are just some of the many groups that have been there to help in the last year.

“The people here are all very grateful for all of the work that the volunteers have done for them,” Father Dang said. “They have said they cannot express enough their gratitude. … To have something happen to you and then all of the sudden there is a room of people … coming to you to tell you they are going to help you to rebuild your house — it’s so amazing.”

The houses, he noted, that have been built for flood victims are beautiful. Father Dang said that he was especially touched by the determination of volunteers to replace what was lost, many even working through the winter months to complete projects and repairs. “The weather was really cold,” Father Dang recalled, “but they were still out there working.”

To help volunteers while they are helping flood victims, Father Dang has opened the top floor of the parish’s food pantry for lodging. He also provides the volunteers with cots on which to sleep.

Flood recovery efforts are continuing across the state.

NEXT: Amid polarization, nation urged to reclaim civility through dialogue