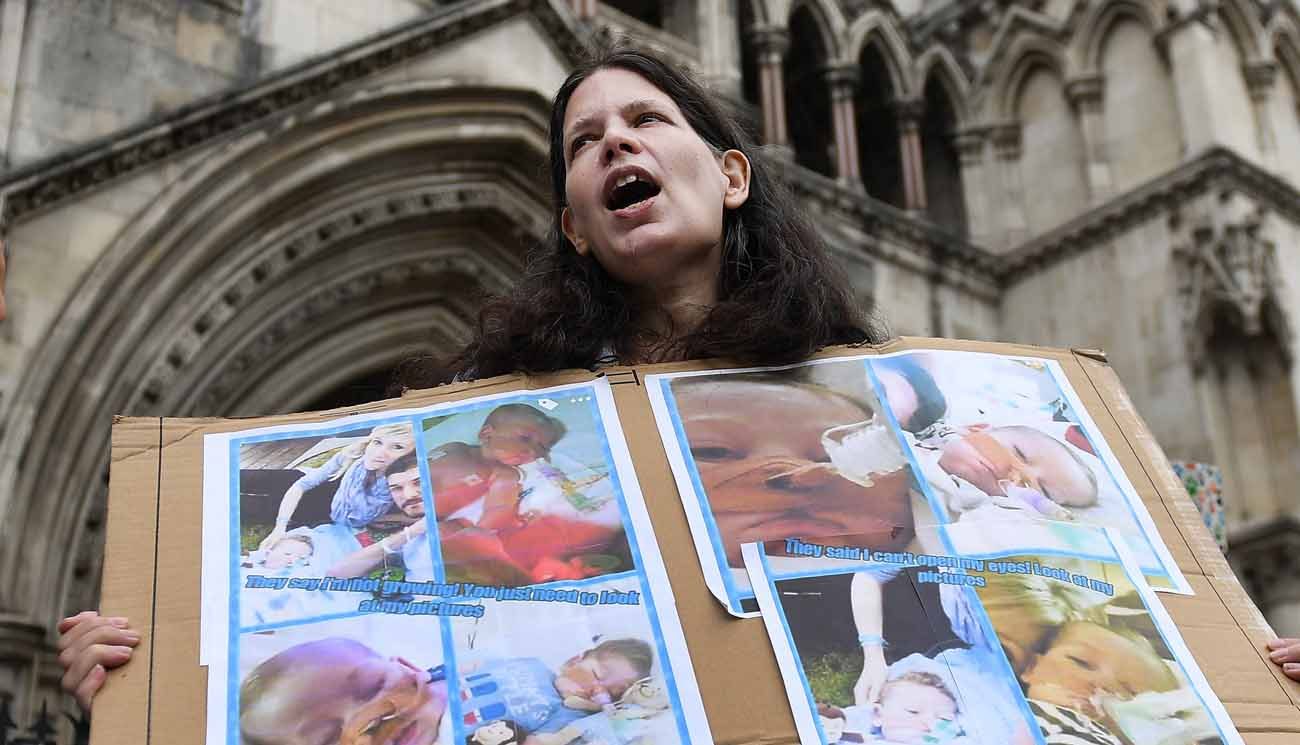 Supporters of the parents of Charlie Gard demonstrate outside England's high court in London July 13. Charlie's parents, Connie Yates and Chris Gard, petitioned the court to allow them to travel with their terminally ill child to the United States for medical treatment. The court denied their request but ruled that a U.S. doctor who specializes in the baby's condition can travel to England to examine the child. (CNS photo/Andy Rain, EPA)

NEW YORK (CNS) — The national director of Priests for Life in New York welcomed a London court’s decision allowing a U.S. doctor to go to England to examine a 10-month-old terminally ill British infant at the center of a medical and ethical debate.

The baby’s parents, Chris Gard and Connie Yates, lost their legal battle to keep Charlie on life support and to then take him home to die. They also were denied permission to take the baby to the United States for evaluation and possible treatment. The couple had raised $1.8 million through crowdfunding to cover the cost.

Doctors at London’s Great Ormond Street Hospital said transferring the baby to a U.S. hospital would prolong his suffering. On July 14, England’s High Court ruled he could be examined by Dr. Michio Hirano of Columbia University.

“News that an American doctor with experience in treating Charlie’s disease will travel to the U.K. to examine him is certainly welcome,” Father Frank Pavone said.

The Sun, a British newspaper, reported July 17 that Hirano, a neuorologist, had arrived in London and had visited the baby for the first time and left after five hours. He was unaccompanied by a second unidentified doctor, who also has been allowed to examine the infant.

Hirano has treated other children suffering from the same extremely rare condition that Charlie has, and he has stated he thinks there’s a 10 percent chance that Charlie’s condition could improve.

“Ultimately, the decision about further treatment should be made by Charlie’s parents in consultation with the doctors they choose, and not by any court,” Father Pavone said in a statement.

“Where there’s life, there’s hope,” the priest said, “and we will continue praying for Charlie and his parents.”

Pope Francis called for respecting the wishes of a terminally ill child’s parents to accompany and care for their child “until the end.” A Vatican spokesman said July 2 that the pope has been following “with affection and emotion” the events concerning the baby.

President Donald Trump also has followed the case. In a July 3 tweet, he expressed his support for the Gard family, writing: “If we can help little #CharlieGard, as per our friends in the U.K. and the pope, we would be delighted to do so.”

Marjorie Dannenfelser, president of the Susan B. Anthony List, said in a July 6 statement that Charlie’s parents “understand that the odds are against him, but like all great parents, they are not only willing but are anxious to take those odds and fight for the life of their child.”

“Quoting Wesley J. Smith at First Things, ‘Whose baby is Charlie Gard, anyway?’ That is the crucial question,” she said. “And what follows, who has the right to determine his ‘care’? We put ‘care’ in quotes here because what the British government insists (what) it must do cannot be called ‘care.'”

The parents “want to truly care for their child in the way only parents can. They love him in a way an institution — a hospital and government — cannot,” said Dannenfelser.

She called it “dangerous utilitarianism” for Charlie’s parents not being allowed to put their baby in the care of those who do not see such “parental love in action as an act of futility.”

A petition urging the hospital to allow the baby to be taken to the United States was signed by more than 350,000 people.