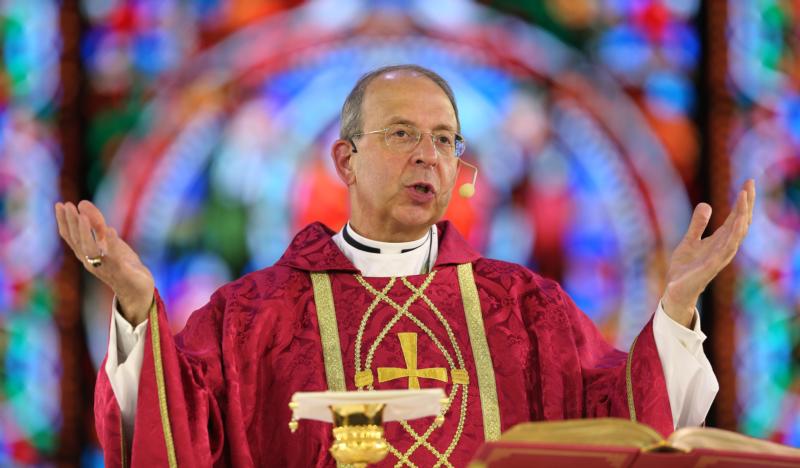 Baltimore Archbishop William E. Lori concelebrates the Fortnight for Freedom Mass July 3 during the “Convocation of Catholic Leaders: The Joy of the Gospel in America” in Orlando, Fla. Leaders from dioceses and various Catholic organizations gathered for the July 1-4 convocation. (CNS photo/Bob Roller)

ORLANDO, Fla. (CNS) — In the July 3 closing Mass for the Fortnight for Freedom, Baltimore Archbishop William E. Lori called on Catholics to thank God for the gift of freedom and to pray that they “use this gift well and wisely.”

“It’s too easy to let this gift lie dormant or be neglected,” he said in his homily at the Mass celebrated during the “Convocation of Catholic Leaders: The Joy of the Gospel in America” in Orlando.

Archbishop Lori, chairman of the U.S. bishops’ Committee for Religious Liberty, had celebrated the fortnight’s opening Mass June 21 at the Basilica of the National Shrine of the Assumption of the Blessed Virgin Mary in Baltimore.

This is the sixth year of the U.S. Conference of Catholic Bishops’ Fortnight for Freedom — a two-week period of prayer, advocacy and education on religious freedom. It starts on the vigil of the shared feast day of St. John Fisher and St. Thomas More -– martyrs who fought religious persecution — and ends on Independence Day.

In his homily, the archbishop urged convocation delegates to advocate for those whose freedoms have been denied and to seek better laws and engage political leaders but he also stressed that nothing is more important that bearing witness to Catholic teaching and “fulfilling our mission to love.”

He did not list current challenges to religious freedom but he noted that before “religious liberty is a political or legal issue it is first and foremost a matter of human dignity.”

He said for Catholics to fully embrace this understanding of religious freedom they might need to “undergo a process of conversion” not unlike St. Thomas, whose feast was celebrated July 3. The apostle would not believe Christ had risen until he touched his wounds and saw it was true.

The archbishop urged Catholic leaders attending Mass in the hotel ballroom to go back to their dioceses and parish settings with a renewed sense of mission and a deeper understanding of religious freedom which he said is “entangled in the DNA of responsive faith.”

When Catholics understand how they are spiritually set free, he said, they are able to “witness to those alienated from their faith or those who are lukewarm or on the cusp of vocation or mission.”

Isn’t that why we came here and what we are praying for, he asked the convocation delegates.

At the start of his homily he told the congregation delegates of his own “doubting Thomas” experience. When he was about 10 years old, the family TV set in their house broke down and was “pronounced unfixable.”

During this time, he was visiting a friend, “allegedly doing homework” but he confessed to the congregation he was watching “Mutual of Omaha’s Wild Kingdom.” While he was there, his parents got a call from the parish that they had won a raffle prize of a portable Zenith TV.

“When I got back my parents told me but I didn’t believe it. I thought it was terrible they would make up such a story knowing how I felt,” he said.

Only later, when the TV was delivered, did he believe it.

The archbishop then spoke of the experience of disbelief on the grander scale of Thomas, whose lack of faith was described by St. Gregory the Great as doing more than the other apostles to rekindle faith. Tradition holds that he spread the Gospel message to present-day India.

His encounter with the risen Lord “changed him forever” and prompted him to “go far beyond his comfort zone” the archbishop said, echoing a theme of the four-day convocation that all Catholics are called to be missionary disciples.

PREVIOUS: As the partial travel ban nears, agencies worry about refugees in limbo

NEXT: It’s an exciting time to be an evangelist, convocation delegates told