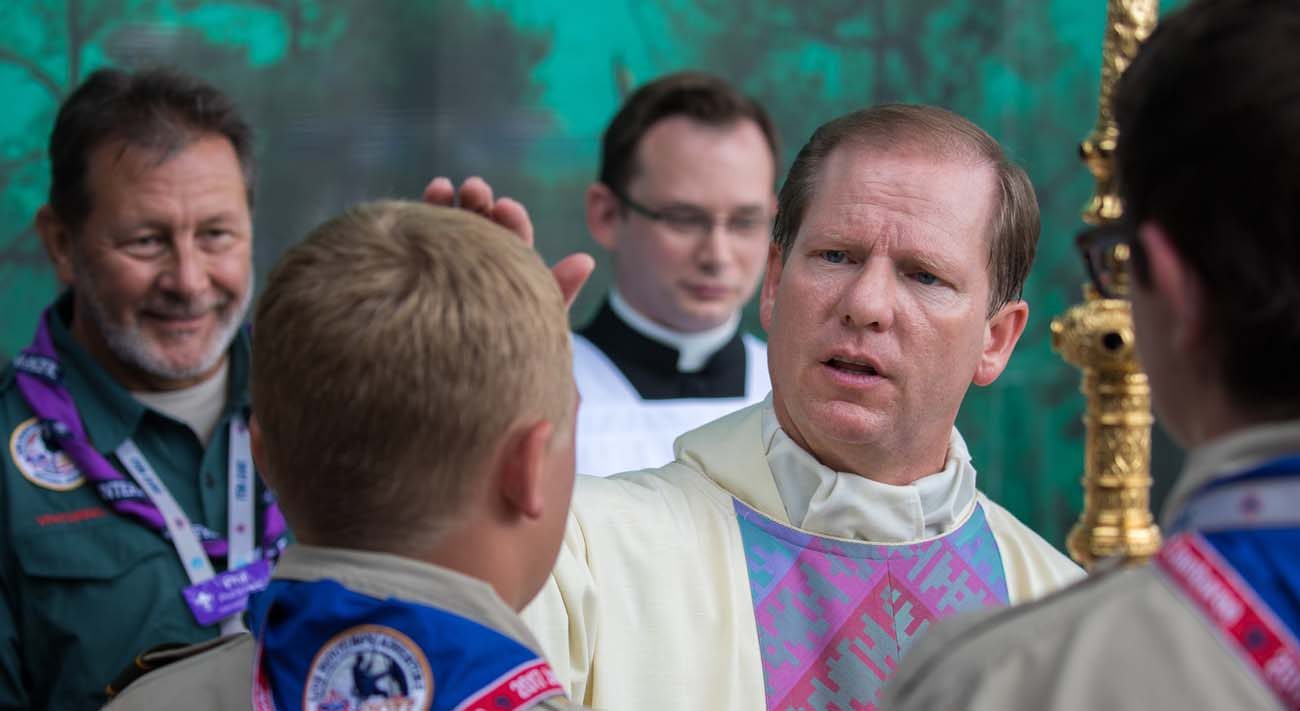 “These values are the antidote to the selfishness and individualism of our society,” Archbishop Christophe Pierre said in his homily. “Scouting also encourages you to work together as a team, to share adventures, and to have a greater vision of life and creation.”

The archbishop was the principal celebrant of the outdoor Mass celebrated in Glen Jean at the Summit Betchel Reserve in the New River Gorge area of West Virginia. The July 19-28 jamboree drew 25,000 Scouts and troop leaders from around the country; about 7,500 attended the Mass.

Concelebrants included two officials of the U.S. Archdiocese for the Military Services, both of whom are Eagle Scouts: Msgr. John J.M. Foster, vicar general and moderator of the curia, and Auxiliary Bishop F. Richard Spencer, episcopal vicar for Europe and Asia. More than a dozen priests also concelebrated.

As he began his homily, Archbishop Pierre thanked Bishop Michael J. Bransfield of Wheeling-Charleston for hosting the Mass and acknowledged Bishop Robert E. Guglielmone of Charleston, South Carolina, who is episcopal liaison for the National Catholic Committee on Scouting. He also assured everyone of Pope Francis’ prayers and his “personal closeness to all gathered here.”

The French-born archbishop recalled his own years as a Scout and how Scouting has benefited members of his family.

“This jamboree brings back a flood of memories from my youth. I was a Scout for five years, right up until I entered the seminary,” he said in his homily. “I know the value of Scouting in my own life as I have traveled all over the world serving as a diplomat, and I have seen the real fruits of Scouting in my own family, especially in the lives of my nephews and nieces.”

Turning to the spiritual, he said that “amid the beauty of creation, Scouts ponder the God who made all things and who invites us to a relationship with Him. Scouting demands that we do our duty toward God, including worshipping him.”

Drawing on the first reading from the Book of Wisdom, he told the Scouts: “We have a God who cares for us” and he sent his Son to be born, not in power and majesty, but in poverty and weakness — as a child.”

Jesus “wanted to be close to the people and to teach them about the kingdom of his father,” Archbishop Pierre said. “It was not a kingdom of power or violence, but one of justice, love, and truth. To teach the crowds, Jesus told parables — stories — just like we share stories in Scouting. Jesus’ stories point us to something new, something beyond this world.”

With God, “our lives are filled with joy, blessing, and fruitfulness,” he said.

“Before we can make known to others this joyful message of the kingdom, we must first attend to the ‘field’ of our hearts,” he said, urging them also to be vigilant in safeguarding “the seed of faith and the power of the Holy Spirit” sown within each of them.

“Jesus reminds us of the need to be vigilant — to stay awake, to be vigilant and keep watch, to be ready to preserve the grace we first received in baptism,” Archbishop Pierre continued. “Scouts know about staying awake and keeping vigil by the camp fire; about being ready and alert; about watching for danger. We need to do the same with our souls, guarding them from the enemy.

“After keeping watch over our souls, we can look to the needs of others, as a church that goes forth,” he said.”Our own commitment to holiness, to our neighbor, to the environment, and to being honest and decent can be an antidote for our culture and world.”

He quoted Pope Francis: “An evangelizing community is always concerned with fruit, because the Lord wants her to be fruitful. It cares for the grain and does not grow impatient at the weeds.”

“The Holy Father is asking you, the Scouts, to be vigilant — to look out for your brothers and sisters and to be patient,” Archbishop Pierre said. “The important thing is to persevere, to not give up in your mission and to not give up on others, hoping that they might have new life.”

He said the pope “constantly refers to all the baptized as missionary disciples.”

“Scouts cultivates in young people a real spirit of adventure, a zeal for exploration and for mission. The Lord is counting on you,” he added.

Archbishop Pierre said the Scouts are called to be “leaven” in a world today that “is plagued by isolation, selfishness and individualism. In contrast, Scouts know something about being together, including others, and teamwork. Everyone must contribute something.”

He said he has always been impressed by Scouts’ spirit of “commitment and generosity.” He closed his homily “with a prayer for generosity” — the Scout Prayer — “which I learned many years ago.” He asked the Scouts to make the prayer there own reciting it first in French and then in English:

“O Lord, teach me to be generous; To serve you as you deserve; To give and not to count the cost; To fight and not to heed the wounds; To labor and not to seek for rest; To toil and not to seek any reward; Except that of knowing that I am doing your holy will.”