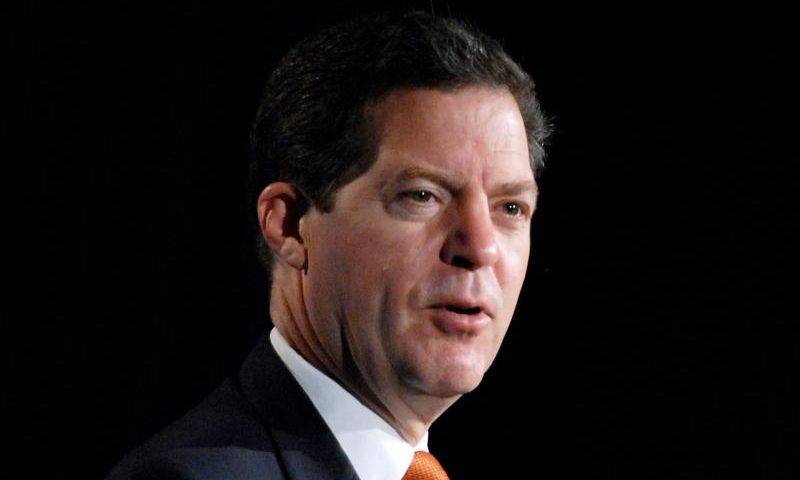 President Donald Trump nominated Republican Gov. Sam Brownback of Kansas as an ambassador of for religious freedom July 26. Brownback, a Catholic, is pictured in a 2007 photo. (CNS photo/Jonathan Ernst, Reuters)

“At noon today, I went and did something that is simple and done by millions of Americans every day,” Brownback said. “But other people in different parts of the world, they risk their lives or could face death, and some have faced death for doing it.”

“I took Communion. And people face death around the world, for this simple act.”

President Donald Trump nominated Brownback to the position of ambassador at large for International Religious Freedom, according to a White House announcement July 26.

The governor tweeted Wednesday night, “Religious freedom is the first freedom. The choice of what you do with your own soul. I am honored to serve such an important cause.”

The governor has a long record of upholding religious freedom, since his support of the International Religious Freedom Act in 1998 as a U.S. Senator. This is the act which created the office for which he was just nominated. In 2002, Brownback became a Catholic.

According to World, an online magazine, Brownback said, “The level of persecution continues to grow,” and that since the office was created, not enough has been done.

Senate approval is unlikely to occur prior to lawmakers leaving for their summer recess. His position cannot be confirmed without Senate approval.

With his predicted resignation from governorship if the nomination is confirmed, Lt. Gov. Jeff Colyer, a fellow Catholic and two-time running mate of Brownback, will assume the role as governor.

Brownback has served on the Hill in various capacities including as congressman for Kansas’ second congressional district in 1994 and as U.S. senator for 14 years. In 2010, Brownback was elected governor of Kansas.

His record has been far from favorable due to his experimental tax cuts, with a 2016 New York Times survey naming him the most unpopular governor, with only 26 percent approval rating. His tax cuts, which were implemented in 2012, severely cut back Kansas’ revenue to the point of threatening its schools and other programs. The Kansas Legislature, with a Republican majority, reversed these tax cuts in early June, returning tax rates to their levels prior to Brownback’s term.

But despite his tax policy failure, Brownback said in the July 27 news conference that he is most proud of the pro-life legislation that has passed under his governorship. He said that he has signed 19 pro-life bills.

“The one thing I am most pleased about is that we have really moved as a culture of life state,” Brownback said. “And we are not going back.”

Rep. Chris Smith, R-New Jersey, who is chairman of the House panel on global human rights, said Brownback has the experience to effectively promote religious freedom around the world.

“He is a man of deep religious faith and will work tirelessly to combat religious persecution and extremism,” Smith, a Catholic, said in a statement. “I congratulate him on his recent nomination and urge the Senate to move quickly on his confirmation — religious minorities abroad depend on it.”

Brownback spoke about his run as governor, senator and congressman throughout the years for the state of Kansas. But also about how his experience with the International Religious Freedom Act in 1998 has prepared him for this potential new role.

“International religious freedom is going the wrong way, its getting worse,” Brownback said. “It hasn’t improved. We passed a bill in 1998 and the situation hasn’t improved. You could argue that it has gotten worse.”

The governor confirmed that he has not spoken with anyone within the Senate and so a timeline on his nomination vote is unknown.