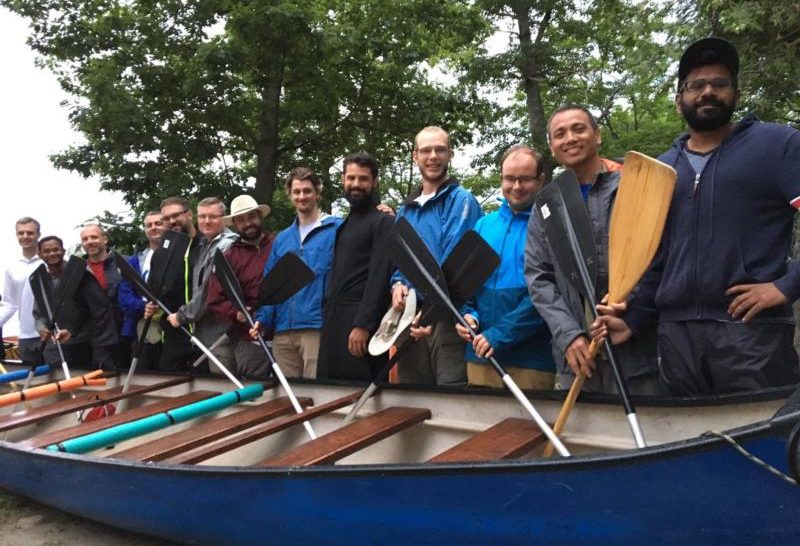 Jesuit priests in Canada pose for a photo in July. They have embarked on a 540-mile canoe journey that will take them from Midland, Ontario, to Montreal, in an effort to promote reconciliation with Canada’s indigenous peoples. (CNS photo/courtesy Canadian Canoe Pilgrimage)

TORONTO (CNS) — The path to reconciliation between Canada and its First Nations’ people will ultimately be a long journey, but the road to healing a schism developed over 400 years needs to start somewhere.

The Canadian Canoe Pilgrimage is a small starting point that organizers hope can advance the process. A project of the Jesuits in English Canada in response to the Truth and Reconciliation Commission, the pilgrimage set off from Sainte-Marie Among the Hurons in Midland, Ontario, July 21 on a monthlong, more than 500-mile canoe journey expected to end Aug. 15 at the Kahnawake First Nation near Montreal.

The project, two years in the making, has brought together different cultures in an example of how to foster respect, trust, dialogue and friendship. The goal is to have the diverse core group of 30 indigenous and Jesuit paddlers — with others joining at stops along the way — become immersed in each others’ customs and traditions for an entire month.

“We’re working together, both sides in a sense, coming through this,” said Kevin Kelly, a Jesuit scholastic who is among the pilgrimage’s organizers.

The journey will take paddlers along a historic route traveled by Samuel de Champlain, St. Jean de Brebeuf and other pioneers alongside their First Nations’ guides. From Midland, the group will follow the shores of Georgian Bay to the French River and move inland toward Lake Nipissing. Crossing the lake, the pilgrimage will paddle along the Mattawa River to the Ottawa River, then down to the St. Lawrence before finishing in the Montreal area at Kahnawake.

The relationship between Canada and its indigenous peoples has been long and complicated since the first Europeans arrived four centuries ago. While the colonizers found wealth, indigenous nations became mired in poverty and still suffer from its corresponding effects. Among many wrongs, perhaps the greatest was the Indian residential schools system that saw indigenous children taken from their families and placed in government-funded, church-run schools. The purpose of these schools was to assimilate indigenous youth into European culture by separating them from their familial and cultural roots.

The Truth and Reconciliation Commission ran for six years and gathered the written and oral history of the residential schools to begin a process of reconciliation between indigenous people and the rest of Canada. Its final report in 2015 included 94 Calls to Action, many of which focus on education.

“Our interest as Jesuits is working with indigenous peoples,” said Kelly, who noted the Jesuits had a residential school. “We really believe the step forward in this must be coming to terms with those things.”

Kelly said he believes the simplicity of the pilgrimage is what makes it so powerful.

“There’s no agenda, we’re not setting out to, at the end, have a statement on reconciliation or a process for dialogue. This is about the very fundamentally human practice of how do we better communicate in a space where we’re going to be together exclusively for a month. The informal and the simple are really important ways of getting past the things that structure us.”

While a number of First Nations along the route will be welcoming the pilgrimage, hosting the group overnight, holding celebrations, sharing their customs and accommodating Mass, others are casting a cautious eye toward it. While they will allow the group to stay on their land, they will not be drawing any attention to the paddlers.

“We’re OK with that, we understand what that looks like,” said Kelly. “They may not be ready for this. We’re just at the start of what moving forward in reconciliation out of the TRC looks like. It’s not like it’s done and everybody’s on the same page. It’s really a work in progress.”

The group is working with the ecumenical group KAIROS in reaching out to communities along the way to spread the message of reconciliation. And Kelly is hoping the diverse participants, who come from all walks of life from points across Canada, will take this life-changing experience and “go back to where they’re coming from to share this experience.”

Kelly and the group understand that their pilgrimage is only the starting point in healing a fractured relationship.

“It’s in a single activity like this, being together for a month, figuring out how do you canoe, camp, struggle through challenges, struggle through hard work, fatigue, that’s where you get to know the other,” he said.

It may sound exhausting, yet Kelly takes inspiration from another Jesuit, Pope Francis.

“If you are going to make things happen, the pope talks about reality is far greater than ideas. Ideas are important, but putting them into practice is critical.”

The group’s progress can be followed at canoepilgrimage.com.

Conlon writes for the Toronto-based The Catholic Register.

NEXT: In Tanzania, young people learn about selves as they help elderly