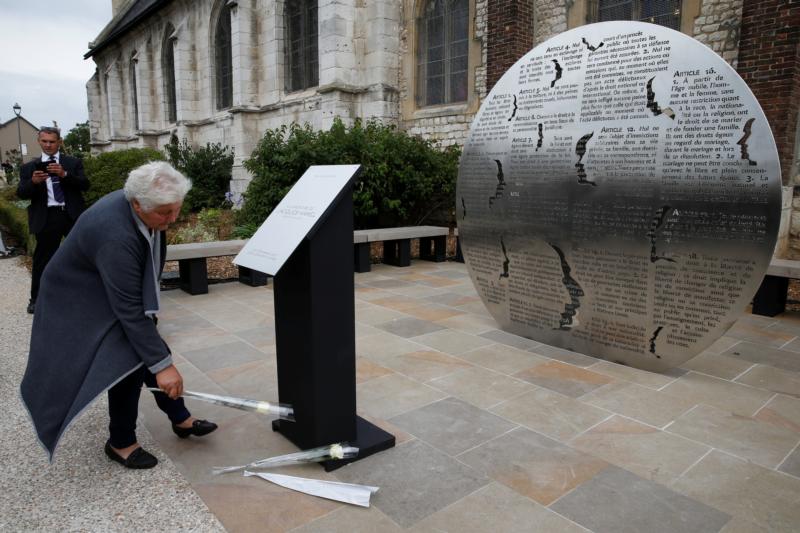 A woman places a flower in front of a plaque and monument in Saint-Etienne-du-Rouvray, France, July 26, to pay tribute to French Father Jacques Hamel one year after he was killed by Islamist militants while celebrating Mass. (CNS photo/Pascal Rossignol, Reuters)

VATICAN CITY (CNS) — The martyrdom of a French priest killed a year ago while celebrating Mass was an event that “has transformed me as a bishop,” Archbishop Dominique Lebrun of Rouen said.

Father Jacques Hamel’s life — “simple and exemplary — questions me as a pastor and shepherd on how to consider the life of priests, on what I expect from them in terms of efficiency. I must tirelessly convert, to pass from this request for efficiency to admiration for their fruitfulness,” the archbishop said in an interview with the Vatican newspaper, L’Osservatore Romano.

Father Hamel was murdered July 26, 2016, when two men claiming allegiance to the Islamic State stormed his parish church in Saint-Etienne-du-Rouvray near Rouen.

After taking several hostages, the attackers slit Father Hamel’s throat and seriously injured another parishioner. Witnesses say that in his final moments, the beloved 85-year-old parish priest tried to push away his attackers with his feet, saying “go away, Satan.”

Despite the violent nature of Father Hamel’s death at the hands of terrorists claiming to be Muslims, his martyrdom instead has drawn the Catholic and Muslim communities in the diocese closer together, Archbishop Lebrun said.

“This tragic event shared by others has brought me closer to the local society in its diverse components: naturally to the town of Saint-Etienne-du-Rouvray and then to the other municipalities in the area,” the archbishop said. “And from now on, I am bound to the Muslim community and to the other communities of believers in the territory of my diocese.”

Father Hamel’s martyrdom drew the attention of Pope Francis who celebrated a memorial Mass for him Sept. 14, 2016, with Archbishop Lebrun, Roselyne Hamel, Father Hamel’s sister, and 80 pilgrims from the diocese.

When Archbishop Lebrun presented the pope with a photo of Father Hamel, the pope asked him to place it on the altar and after the Mass told the archbishop, “You can put this photo in the church because he is ‘blessed’ now, and if anyone says you aren’t allowed, tell them the pope gave you permission.”

Archbishop Lebrun told L’Osservatore Romano that he then spoke with Cardinal Angelo Amato, prefect of the Congregation for Saints’ Causes, regarding the opening of Father Hamel’s sainthood cause and the possibility of accelerating “the process to take advantage of the elements of proof which are the testimonies of the other victims of the attack, who are mainly elderly.”

The first meeting in the process for Father Hamel’s sainthood cause took place May 20, and the results of the local investigation into his life should be completed and ready for Vatican review from one to three years from now, the archbishop said.

Meanwhile, Father Hamel’s life and martyrdom remains “an extremely powerful event” that has united the diocese, priests, the church in France, people within the territory and the Muslim community, Archbishop Lebrun said.