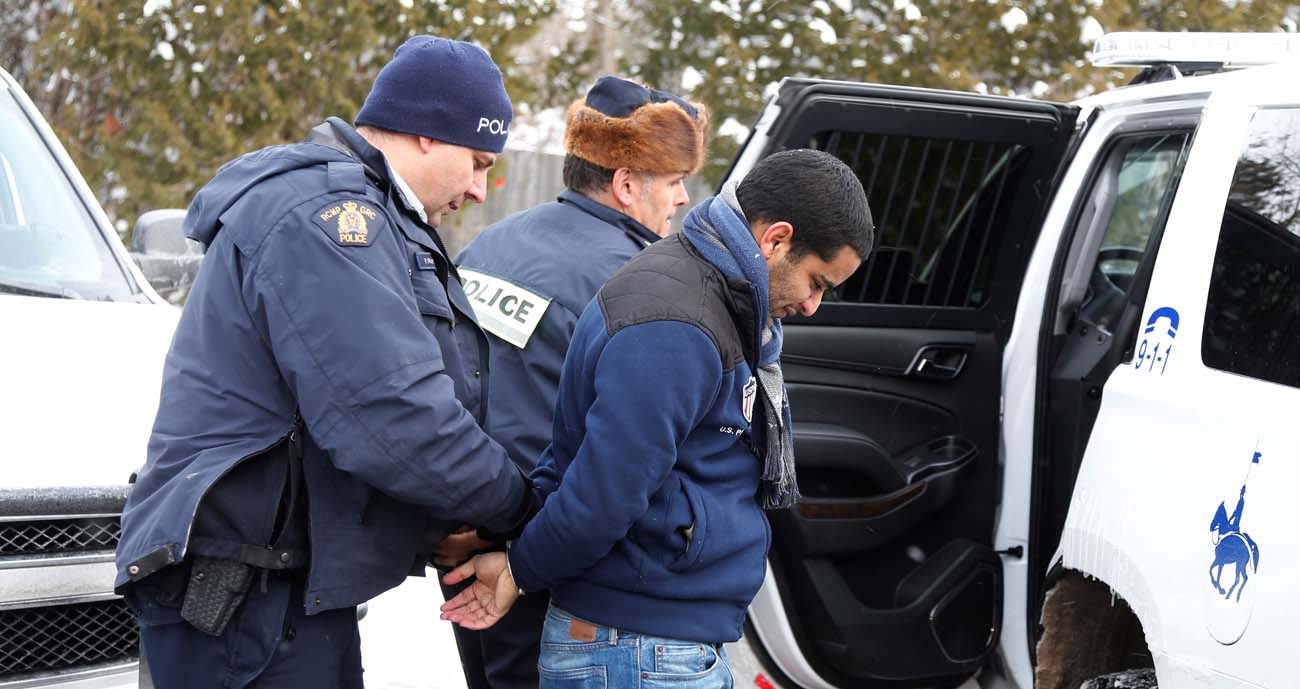 A man who told police he was from Mauritania is taken into custody Feb. 14 by Royal Canadian Mounted Police officers after walking across the U.S.-Canada border into Quebec. (CNS photo/Christinne Muschi, Reuters)

TORONTO (CNS) — Canada’s major churches, the Canadian Council for Refugees and Amnesty International Canada are taking the federal government to court, hoping to strike down a 13-year-old agreement between the United States and Canada on treatment of refugees.

The legal challenge to the Safe Third Country Agreement between Canada and the U.S. contends that Canada cannot rely on the fairness or objectivity of the American system for granting or denying asylum to potential refugees. In force since 2004, the agreement forces refugees to claim asylum in the first safe country they arrive in. With a very few exceptions, refugees at Canada’s land border with the U.S. are turned away and told they must apply for refugee status in the U.S. — they may not claim asylum in Canada.

“It is wrong, morally and legally, to send claimants back to the U.S. knowing, as we do, that they may face serious violations of their basic rights,” Loly Rico, president of the Canadian Council for Refugees and co-director of FCJ Hamilton House, said in a July 5 statement.

The Canadian Council of Churches — which includes the Canadian Conference of Catholic Bishops — Amnesty International and the Canadian Council for Refugees won a similar case against the Safe Third Country Agreement in Federal Court in 2008. That decision was overturned on appeal, not on the substance of the case but on a question of whether the organizations bringing the case to court had standing to make their legal argument against the agreement.

This time the case is being brought on behalf of a Salvadoran woman, identified only as “E,” who fled through the United States with her daughters after a decade of being targeted by a drug gang threatening her with death. Her legal team claims she cannot get a fair hearing in the U.S., but she has good reason to believe she would be granted asylum in Canada.

“It is imperative that all who seek refuge in Canada are afforded the protections guaranteed to them under the Canadian Charter of Rights and Freedoms and international human rights treaties,” said the Rev. Karen Hamilton, Canadian Council of Churches general secretary.

Immigration, Refugees and Citizenship Canada argues that safe third-country agreements are supported in principle by the U.N. High Commissioner for Refugees.

“Similar agreements are used by countries around the world to control pressures on asylum systems,” IRCC spokeswoman Nancy Chan told The Catholic Register, a national Catholic weekly based in Toronto. “The STCA remains an important tool for Canada and the U.S. to work together on the orderly handling of refugee claims made in our countries.”

The churches and refugee advocates claim U.S. handling of refugees outside of its immigration courts is discriminatory, that the courts themselves are arbitrary, widespread use of detention is designed to deny refugees access to immigration courts and that conditions for refugees trying to make asylum claims in the United States have deteriorated significantly under the administration of President Donald Trump.

“The U.S. was never safe for all refugees and now is even less safe,” Rico said.

“Canada has carefully analyzed developments in the United States, including with respect to the recent executive orders related to immigration and refugee matters, and determined that the U.S. remains a safe country for asylum claimants to seek protection there,” Chan wrote in an email. “This finding is also shared by the U.N. Refugee Agency (UNHCR).”

In May, the Canadian Council for Refugees and Amnesty International Canada submitted a 52-page brief to Immigration Minister Ahmed Hussen outlining their concerns over political interference and dysfunction in the U.S. refugee system.

“We hoped that the government would be willing to take a serious look at the human rights violations occurring in the U.S.,” Janet Dench, executive director of the Canadian Council for Refugees, told The Catholic Register in an email. “We gave the government a timeline to respond, and an extension to that timeline at their request. We held off releasing the report until after their response, which did not address the substance of our submissions.”

Swan is associate editor of The Catholic Register.

NEXT: Vatican asks bishops to ensure validity of matter for Eucharist