In Jericho, new Franciscan youth center offers chance to meet ‘the other’ 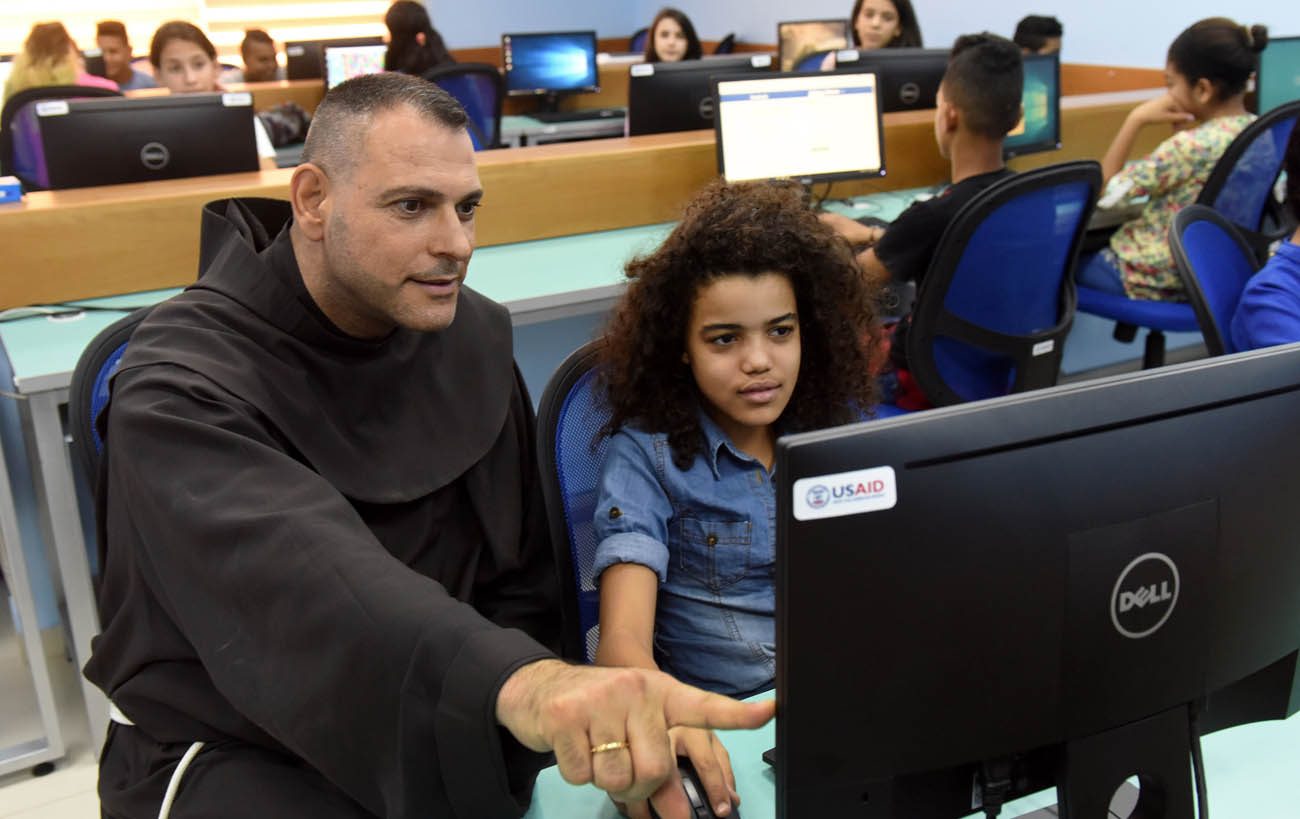 JERICHO, West Bank (CNS) — Ahmed Za’atreh’s love affair with photography began last year, when a relative came back from a trip abroad and gave him a camera. The 15-year-old focused his lens on the brown-hued desert mountains and valleys surrounding Jericho and began taking pictures.

This summer, with the inauguration of the Franciscan youth center adjacent to the Terra Santa School, Za’atreh has been able to take his hobby up a notch as he and his friends get professional training, not only in photography but in digital media in general, including videography and radio production.

“I want to be a professional photographer,” said Za’atreh, who has been spending most of his summer days at the center. “I can improve my skills in this class.”

His friend Ashraf Barahema, 17, had his face hidden behind a camera, hopping between Za’atreh’s interview and a group of boys being photographed in the radio studio next door as he snapped photographs of his own.

“Photographers should take pictures of everything,” he said between photographs.

Rona Hmaid, 22, a digital media student at Al-Quds Open University in Jerusalem, told Catholic News Service, “This class is giving students the opportunity to enhance their individual creativity and see things in new ways.” Hmaid travels two hours each way from her village near Ramallah to reach the center every day.

An outgrowth of the Good Shepherd Sports Club, the center was built on Franciscan-owned property and financed by the U.S. Agency for International Development, American Near East Refugee Aid and IREX, a U.S. nongovernmental organization. It opened its doors in March to youth 14-29, offering free courses such as English lessons, art, theater and computers, as well as sports.

While there are other options for summer classes in Jericho, Kassis and Franciscan Father Mario Hadchity, the local parish priest, are in the process of getting the courses at the youth center recognized by the Palestinian Ministry of Education, which would allow participants to receive academic credit and certificates at the completion of each course.

Father Hadchity said he envisions the center as also being a place of social encounter and education toward peace by exposing the youth to different cultural and social ideas and norms.

“We are so pleased to be able to give the people here new opportunities. We can give people the opportunity to discover new horizons,” he said. “They can also meet up together and join together.”

Some 500 Christians, both Catholic and Greek Orthodox, live in Jericho, which has a Muslim-majority population of about 53,000.

Most notably, the center not only hopes to introduce the concept of new possibilities to the young people whose parents are largely merchants or farmers, but also hopes to provide them with an opportunity to socialize with different youths.

The more people are exposed to “the other” — whether it be people of the opposite sex, of different religions or nationalities — the more they are able to respect one another, and that sense of respect extends to other social or political situations, Father Hadchity said.

“Because the Franciscans are a point of peace, it is our job here in Jericho to also educate people to be open-minded and accept others. They must love the other,” said Father Hadchity.

PREVIOUS: Colombian martyrs: witnesses to the point of death