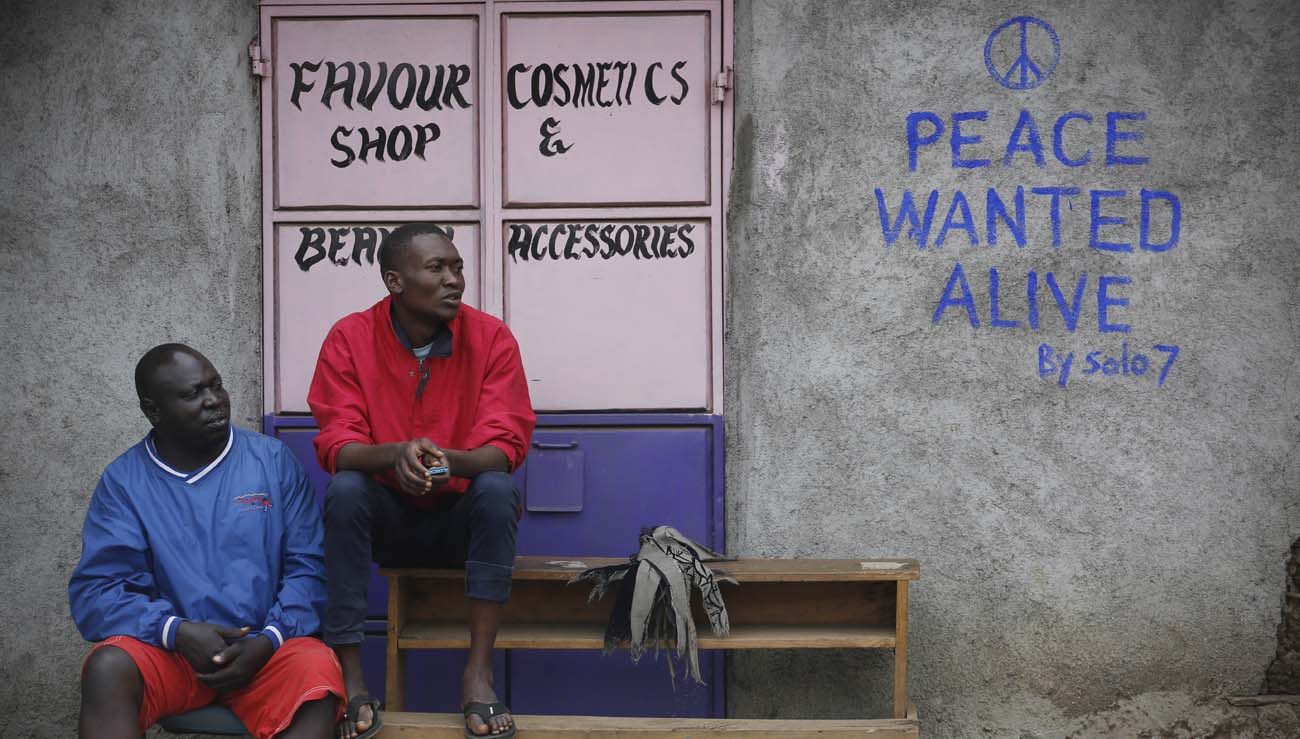 Men sit in front of a wall with a message of peace July 23 in Nairobi, Kenya. Kenyan Catholic bishops have urged citizens to prepare to vote peacefully in the Aug. 8 general elections. (CNS photo/Dai Kurokawa, EPA)

NAIROBI, Kenya (CNS) — Kenyan Catholic bishops have urged the citizens to prepare to vote peacefully in the Aug. 8 general elections.

“We need to create a peaceful environment to demonstrate our patriotism for our wonderful country and ensure that all parts are in peace,” said Bishop Philip Anyolo, chairman of the Kenya Conference of Catholic Bishops, in a statement delivered at a news conference July 28. “We are calling on all Kenyans to seize this opportunity to exercise our constitutional right and give ourselves leaders of integrity.”

The bishops noted a relative peace in the latest part of the campaigns. Earlier violence rekindled memories of 2007-2008 postelection violence, when incumbent Mwai Kibaki was declared the winner and candidate Raila Odinga rejected the poll as stolen. More than 1,000 people died and more than 300,000 were displaced from their homes.

More than 19 million voters in the mainly Christian country are expected to cast ballots to elect a president, legislators, governors and local leaders in the August elections.

Earlier, Bishop Cornelius Arap Korir of Eldoret warned that the country could not afford another violent moment.

“We don’t want to see the divisions and violence we experienced in 2008. It was so bad, so bad. I would not like to see people camping again in an independent country,” said Bishop Arap Korir, whose Rift Valley region was most affected by the violence.

The bishop is chairman of a religious leaders’ forum, which is seeking to steer the country into peaceful and credible elections. The bishop said religious leaders are taking key roles in the elections, since most candidates are members of churches, mosques or temples.

“We are saying how to we help them at this crucial time of elections, how do we diffuse the tensions. We have been sharing a lot as religious leaders,” said the bishop.

On July 27, he told Christian, Muslim and Hindu leaders the country had seen a lot challenges, but it was because of the prayers of the clergy that 2017 elections would turn out peaceful and credible.

Protestant leaders gathering in Nairobi July 26 called for wide participation in voting, acceptance of results, no compromise on peace and punishing those who commit offenses during the elections. They also called for the protection of women, who they said had become victims of intimidation and violence on the campaign trial.

NEXT: Cardinal says Venezuela must take blame for 10 election-related deaths