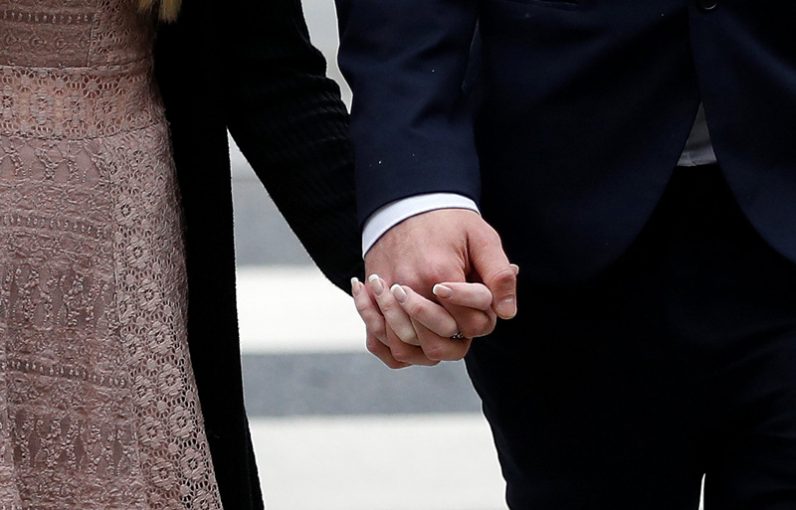 Connie Yates and Chris Gard hold hands as they arrive at the High Court in London July 24. Pope Francis is praying for the parents of Charlie Gard after a U.S. doctor told them nothing could be done to help their son who suffers from encephalomyopathic mitochondrial DNA depletion syndrome. (CNS photo/Peter Nicholls, Reuters)

UPDATED – MANCHESTER, England (CNS) — Pope Francis is praying for the parents of Charlie Gard after a U.S. doctor told them nothing could be done to help their son.

Chris Gard and Connie Yates announced in London’s High Court July 24 that they had ended their legal struggle to take their baby overseas for treatment after a U.S. neurologist, Dr. Michio Hirano, said he was no longer willing to offer Charlie experimental nucleoside therapy after he examined the results of a new MRI scan.

Their decision means that the child, who suffers from encephalomyopathic mitochondrial DNA depletion syndrome, will receive only palliative care and most likely will die before his first birthday Aug. 4.

Greg Burke, director of the Vatican press office, said in a July 24 statement that Pope Francis, who had taken a personal interest in the case, “is praying for Charlie and his parents and feels especially close to them at this time of immense suffering.”

He said: “The Holy Father asks that we join in prayer that they may find God’s consolation and love.”

The Bishops’ Conference of England and Wales also issued a statement July 24 in which they expressed their “deepest sympathy and compassion” for Charlie and his parents.

“It is for Charlie, his parents and family that we all pray, hoping that they are able, as a family, to be given the support and the space to find peace in the days ahead,” the statement said.

“Their farewell to their tiny and precious baby touches the hearts of all who, like Pope Francis, have followed this sad and complex story. Charlie’s life will be lovingly cherished until its natural end,” the statement continued.

A July 24 statement from the Anscombe Bioethics Centre, a bioethical institute of the Catholic Church in the U.K. and Ireland, said it was now time “to remember the preciousness of the child at the heart of this case, and to allow his parents to be with him until he passes from this life.”

“If further treatment may no longer be worthwhile, Charlie’s life is inherently worthwhile, having the dignity and irreplaceability of every human life, and this will remain so even in the coming days,” it said.

Charlie’s parents, who live in London, had fought for eight months for medical help that might have saved the life of their son.

They raised 1.3 million pounds (US$1.7 million) to take him abroad for treatment, but the Great Ormond Street Hospital in London had argued that Charlie was beyond help and that it was not in his best interests to be kept alive, triggering a protracted legal battle with the parents that led to interventions from U.S. President Donald Trump and from the pope.

At a news conference July 25 in Rome, Mariella Enoc, president of the Vatican children’s hospital, Bambino Gesu, said the hospital had partnered with Hirano to study Charlie Gard’s case. The hospital agreed with Hirano that the child’s illness had proceeded too far for treatment, which might or might not have worked six months earlier.

But “the plug was not pulled without having tried to respond to a legitimate request by the parents and without having examined fully the condition of the child and the opportunities offered by researchers on an international level,” the hospital said in a statement.

The lesson learned, Enoc told reporters, was that scientific research must continue and that much more attention must be given to the relationship between researchers, physicians, patients and their families.

In a statement to the court, Charlie’s parents said: “We are about to do the hardest thing that we’ll ever have to do, which is to let our beautiful little Charlie go. … Put simply, this is about a sweet, gorgeous, innocent little boy who was born with a rare disease, who had a real, genuine chance at life and a family who love him so very dearly, and that’s why we fought so hard for him.”

“Had Charlie been given the treatment sooner, he would have had the potential to be a normal, healthy little boy,” they said. “We have always believed that Charlie deserved a chance at life.”

“One thing that does give us the slightest bit of comfort is that we truly believe that Charlie may have been too special for this cruel world,” they continued.

Concluding the statement, the couple said: “Mummy and Daddy love you so much Charlie, we always have and we always will, and we are so sorry that we couldn’t save you. We had the chance but we weren’t allowed to give you that chance. Sweet dreams baby. Sleep tight our beautiful little boy.”