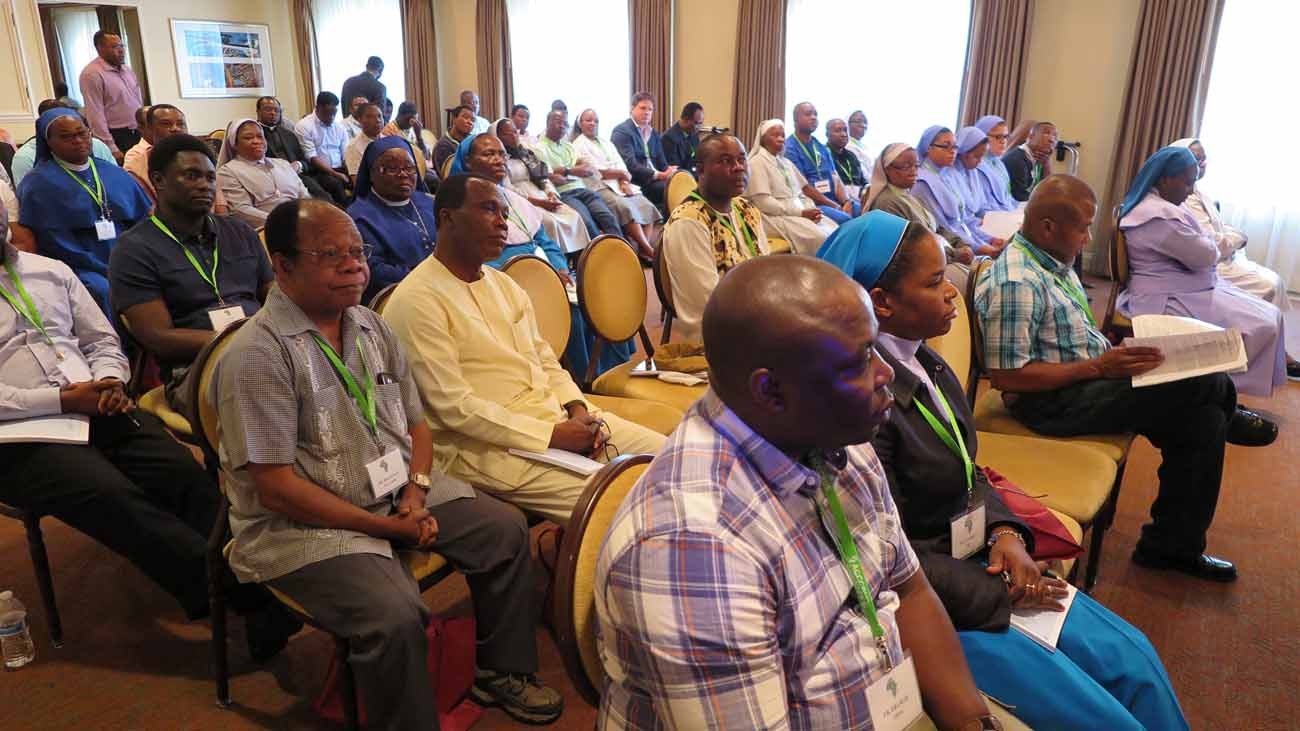 NEW ORLEANS (CNS) — The growing numbers of African-born clergy and religious ministering in the United States are at the vanguard of an important moment in both the U.S. and worldwide Catholic Church, said Jesuit Father Allan Deck.

He addressed about 80 members of this rapidly emerging demographic of church leaders gathered in New Orleans for the 18th annual convention of the African Conference of Catholic Clergy and Religious in the United States.

“The church is growing in Asia, in Latin America and most especially in Africa,” said Father Deck, a teacher of theology and Latino studies at Loyola Maryknoll University in Los Angeles, delivering the conference’s keynote address July 27.

“So at this moment in time and as we move into the future, the life of the universal church, the leadership of the universal church — and all the hard work that we need to do to evangelize — more and more has to be assumed by up-and-coming groups, and one of those groups is the Catholic faithful of the various countries of Africa,” he said.

Father Deck served from 2008 to 2012 as the first executive director of the U.S. Conference of Catholic Bishops’ Secretariat of Cultural Diversity in the Church; the secretariat was established in November 2007 by the bishops.

The priest called the influx of foreign-born ministers “a globalized priesthood, a globalized religious.” These priests and sisters, like their American counterparts, are more likely than ever to find themselves in parishes where there are multiple native languages, desired styles of worship and even clashing beliefs on how a parish meeting should be conducted, he said.

Father Deck noted that African-born clergy and religious serving in the United States already are a step ahead of their American counterparts when it comes to answering Pope Francis’ call for church ministers to leave the security of their geographical parishes to find and serve those living in the margins.

“All of you, because you’re here in this country, have moved out of your comfort zone, but you know what? You must continue to do (that)!” Father Deck told the assembly, which included priests, men and women religious and seminarians.

“People are mingling and encountering each other in numbers and in ways that they never have in all the history of the human race,” he said, recalling a recent trip to a mission church in New Mexico where he came upon the pastor: a priest from Nigeria who spoke “beautiful Spanish” and whose flock was predominantly Mexican-American.

The conventioneers learned a few surprising statistics on their adopted home of America. Currently, half of all Catholics in the United States trace their roots not to Europe, but to Latin America. Of those Hispanic Catholics, 65 percent are Mexican-Americans. In Father Deck’s home Archdiocese of Los Angeles, more than half of the clergy are international, he said.

Ministering in this “globalizing church” challenges church leaders and laity to bring unity to parishes that are increasingly multicultural, intercultural, diverse and pluralistic, the priest said.

The “national parish” model that was effective for more than a century — with each European group having its own church, priests and religious — no longer exists, Father Deck said. More recent immigration trends are asking, for example, formerly all-Latino churches to readjust their programming when Vietnamese Catholics move into the neighborhood; and churches in major cities to welcome newly arrived faithful from Africa. In dioceses such as Atlanta and Houston, African Catholics now outnumber African-American Catholics.

“The subject is no longer multiculturalism as much as it is interculturalism — how the groups mutually relate — not how much they are respected each in their own silo, each in their own compartment,” Father Deck said, noting that a parish’s overarching goal must always be to foster unity while doing its main work of evangelization, rather than trying to get people to conform and assimilate.

Father Deck said that if any organization can do it, “the Catholic Church ought to be able to do it,” calling on American Catholics of all origins to be more patient — and curious — about what diverse groups can contribute to parish life.

“The Catholic Church proves that it’s possible to have unity across the lines of culture and race, the things that divide people,” he said.

Much soul-searching needs to be done by all American Catholics if such “intercultural competency” is to be built, Father Deck said. A litany of obstacles divide us: stereotypes, prejudice, ethnocentrism, racism, bias, classism, sexism, ignorance, fear and guilt.

Deacon Martin Ahiaba, a Nigerian-born seminarian anticipating his ordination to the priesthood for the Diocese of Tyler, Texas, said he must steel himself against the hurt that comes when Americans question the authenticity of his vocational calling.

“One of the biggest misconceptions is that all priests coming from Africa are coming (to the United States) to make a living; they’re coming to look for money,” said Deacon Ahiaba, 44, noting that African seminaries, ironically, require their students to spend 10 to 12 years in formation, compared to the requisite four to six years in American seminaries.

“Still, after ordination, you are sometimes not treated as though you are equal to (the American) priest,” Deacon Ahiaba told the Clarion Herald, newspaper of the New Orleans Archdiocese.

Despite such prejudice, Deacon Ahiaba remains impressed by the scope and quality of Catholic Charities’ outreach, including to refugees fleeing war-torn countries.

“Generally, the church here is very, very welcoming,” he said.

In other convention news, attendees said the appointment of more African-born bishops and cardinals, as well as enhanced intercultural training of future priests at the seminary level, would create a more nurturing ecclesial environment for African-born priests, religious and laity residing in the United States.

Father Henry Atem, national president of the conference of African clergy and religious, known as ACCCRUS, reported that the organization was in the midst of relocating to new permanent headquarters in Houston.

Donze is a staff writer and editor of Kids’ Clarion at the Clarion Herald, newspaper of the Archdiocese of New Orleans.

NEXT: Sandwiches for homeless changing lives of recipients, parishioners alike