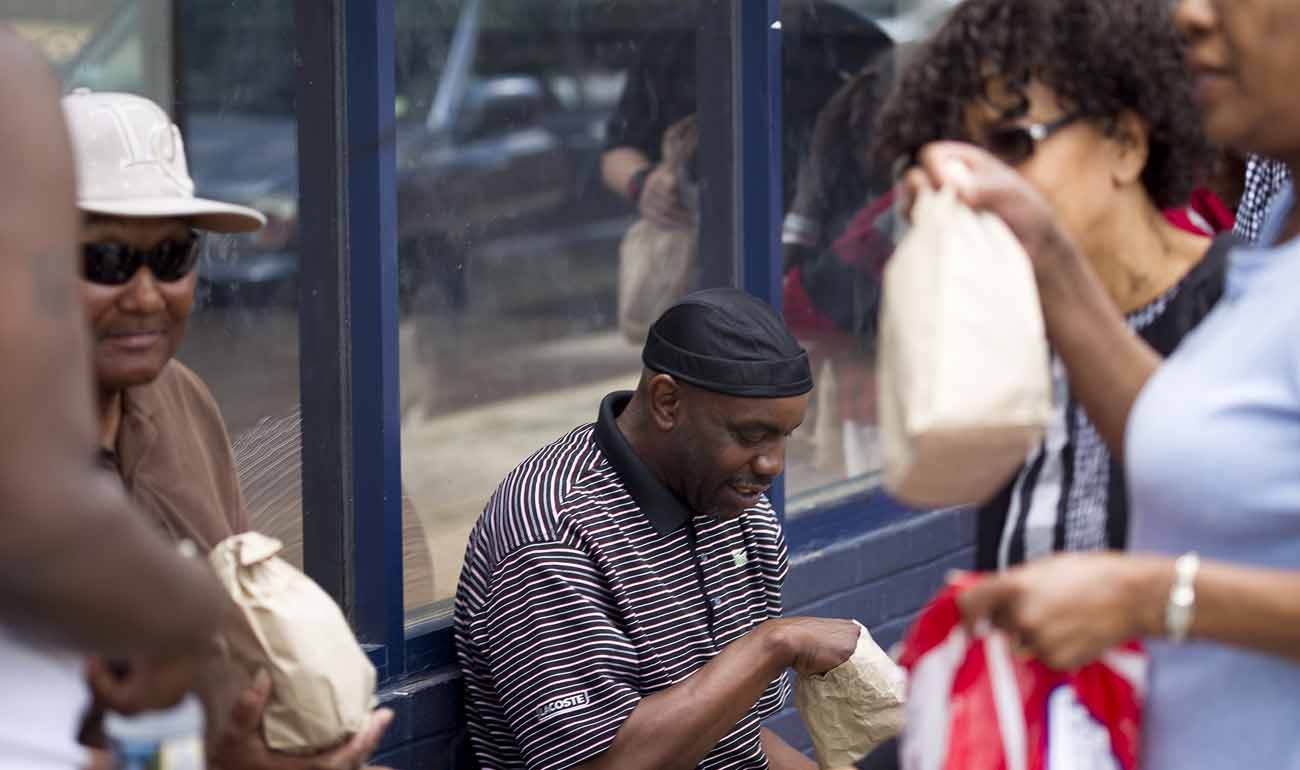 WASHINGTON (CNS) — While driving to work with his son, Eric Von Gay Sr. noticed a homeless man walk out of his tent to look for food in the grass. That’s when Eric Gay Jr. got the idea to “keep what Father Bill started.”

His thought about helping the less fortunate was in response to a luncheon Father Bill Carloni hosted for underserved people a couple weeks earlier at Holy Name Catholic Church in Washington, where the priest is administrator.

Eric Jr. believed his idea would be a perfect way to get the community at Holy Name involved with doing something bigger than themselves.

Since then, Eric Sr. and his wife, Gale Gay, committed themselves to giving food to the homeless after church.

“In this day and age with all that’s going on, I think people need to see that there are people out there that are trying to help them,” said Gale, who spoke to Catholic News Service while giving out lunches. “A positive image that we give to them might give them a vision to what they could do for somebody else.”

Before the school year ended in June, Father Carloni got some of the kids involved with the bagged lunch program.

“When school was in, we would give them (sandwiches) to Father Bill and he would have the kids … walk out with them and give them to the homeless,” Eric Sr. said.

Overall it is a group effort to help those in need, he added.

Holy Name is not only changing the lives of those in need, but its parishioners as well.

Every other Sunday, parishioners gather after the 11 a.m. Mass and fill bags with a sandwich, chips and water. After the bags are prepared, the group walks around the Atlas neighborhood near the church and gives the food to homeless people.

For Eric Sr., “it’s a great feeling.” From the smiling faces to the conversations, he loves interacting with and giving to those in need.

He has served as the parish council president for 10 years and is a member of the 11 a.m. choir. In addition to giving meals to the homeless on the streets, he volunteers his time at the church’s food pantry.

The pantry at Holy Name started as a couple cabinets of food in 2014. The pantry gave out around 10 to 15 bags of groceries per week when they first started. Since then, it has transitioned to a room filled with food in addition to two refrigerators and freezers.

The pantry is open on the second and fourth Tuesdays and Thursdays of each month. People can come to the pantry on Tuesdays from 5-7 p.m. and on Thursdays from 10 a.m. to 12 p.m.

King began volunteering at Assumption Catholic Church in 2008. In fall 2014, she left Assumption and came to Holy Name.

The food pantry consistently gives out 75 to 100 bags per week.

“Our group is steady because most of them are low-income to under low-income,” King told CNS. “We have people come all year long.”

It’s not just the food people come for. Many of them come for prayers from Father Carloni or one of the volunteers. King said she enjoys when people ask for a hug and prayer.

The priest’s church is lively and full of music that has the congregation clapping to the beat. During the rite of Peace, Father Carloni walks around the entire church and shakes each person’s hand.

Holy Name’s churchgoers are diverse in age and race, and Father Carloni said he enjoys seeing the change in the parish community — which reflects the changes in the neighborhood around Holy Name.

“This is a neighborhood that is transforming very quickly,” Father Carloni said.

To learn more about the community near Holy Name, Father Carloni asked the District of Columbia government to conduct a study on the area’s demographics.

It showed the neighborhood has a high percentage of young adults, that the cost of housing has risen and the amount of people living in poverty has remained similar to what it has been.

“Of all the changes that have happened, the amount of people that are under the poverty line has only gone down 1 percent,” Father Carloni said.

This means that those who cannot afford to move out of the neighborhood to find a lower cost of living became more prone to being at the poverty level.

Because of the large number of those in poverty near the church, Holy Name has continued to find ways to help those in its community.

Between the bagged lunch and the food pantry, Holy Name puts a big effort into helping out those in need. The church doesn’t just help those without homes.

“Some of these people have homes, it’s just that they don’t have enough as far as financial stability,” Gale Gay said.

Cheryl McLaughlin, director of religious education and parish secretary at Holy Name, has seen the effects of homelessness in the Trinidad neighborhood, which sits just north of the church and is where many of the church members live.

“I have the privilege of living in the Trinidad neighborhood so I get to see a lot of what goes on in the neighborhood,” McLaughlin said. “We have a lot of homeless people.”

To help those in need, Holy Name provides much more than food, she said.

“We also have shampoos and soaps and toothbrushes and toothpastes and razors and combs,” McLaughlin said. “Simple things that the average person takes for granted, we provide those for anybody that comes to the door and have a need.”

Throughout the year, Gale and her husband offer advice to those they reach out to who need to get on a better financial footing.

“It’s not only about being homeless, but about people that just feel like they don’t have a way out, don’t have a way to succeed,” Gale said. “(We’re) trying to give them that vision that they do.”

In the end, it’s about being there for others.