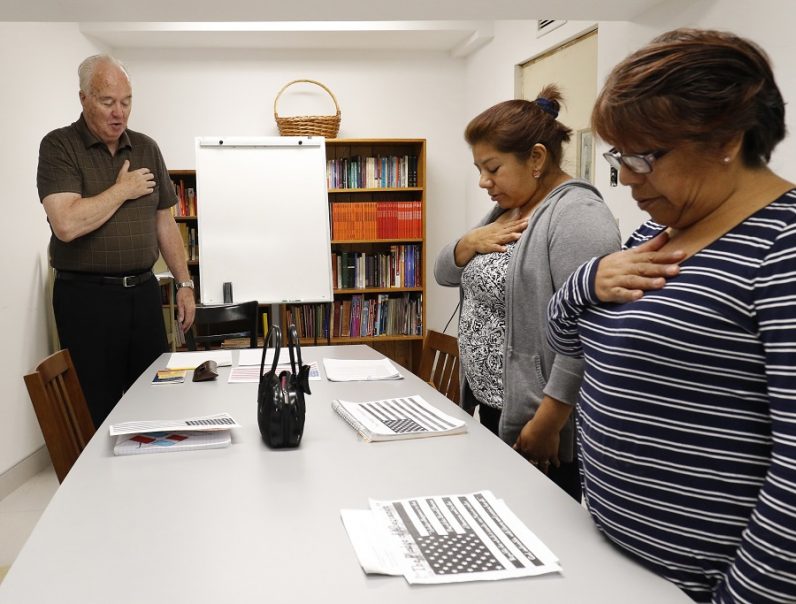 Volunteer instructor Jack Carroll and students recite the pledge of allegiance in October 2016 during a class at St. Luke Church in Brentwood, N.Y., for immigrants who are preparing to apply for U.S. citizenship. (CNS photo/Gregory A. Shemitz)

WASHINGTON (CNS) — Calling a proposed piece of legislation “discriminatory,” the head of the U.S. Conference of Catholic Bishops’ Committee on Migration called on the president and Congress to reject a bill that seeks to drastically cut legal immigration levels in half over a decade and which also would greatly limit the ability of citizens and legal residents to bring family into the U.S.

Other Catholic groups also called for an end to the legislation.

“Had this discriminatory legislation been in place generations ago, many of the very people who built and defended this nation would have been excluded,” said Bishop Joe S. Vasquez of Austin, Texas, chair of the bishops’ migration committee.

In a news release late Aug. 2, he criticized the RAISE Act introduced earlier in the day by Republican Sens. Tom Cotton, of Arkansas, and David Perdue, of Georgia.

In addition to cutting legal immigration, the Reforming American Immigration for a Strong Economy Act, or RAISE Act, would create a system of legal immigration different from the current one that favors family ties. Instead, it would move toward a system under which points would be awarded for a person’s ability to speak English, level of education, age, as well as “high-paying job offers, past achievements, and entrepreneurial initiative,” according to a White House statement praising the proposal.

Other limitations proposed by the RAISE Act would permanently cap the number of refugees allowed safe passage, “thereby denying our country the necessary flexibility to respond to humanitarian crisis,” said Bishop Vasquez.

“As a church, we believe the stronger the bonds of family, the greater a person’s chance of succeeding in life. The RAISE Act imposes a definition of family that would weaken those bonds,” he said.

Kevin Appleby, senior director of international migration policy at the Center for Migration Studies of New York, said the bill “is a nonstarter from a Catholic perspective, as it weakens the family unit and favors the rich over the poor. It also is part of a larger strategy by the administration to reduce the ethnic diversity of the immigrant population in this nation.”

The proposed bill was largely criticized and caused an uproar shortly after the president’s televised support early Aug. 2, saying it would reduce poverty, increase wages and save taxpayer money, adding that many current legal immigrants are “low-skilled” and many receive welfare benefits.

Later in the day, senior White House adviser Stephen Miller further added to the controversy over the bill after he seemed dismissive during a news briefing of the Statue of Liberty’s “The New Colossus” poem and the line “Give me your tired, your poor, your huddled masses yearning to breathe free,” and in defending the bill’s ability-to-speak-English requirement.

Even some of the president’s fellow Republicans, including South Carolina Sen. Lindsey Graham, who said he has supported “merit-based” immigration, said he would not support the bill.

Bishop Vasquez said the bill would be detrimental to families and negates contributions of past immigrants to the U.S., and he called on Congress and the administration instead “to work together in a bipartisan fashion to enact into law comprehensive immigration reform.”

“I believe that such reform must recognize the many contributions that immigrants of all backgrounds have made to our nation, and must protect the lives and dignity of all, including the most vulnerable,” said Bishop Vasquez.

Christopher G. Kerr, executive director of the Ohio-based Ignatian Solidarity Network, a national social justice education and advocacy organization, said from a faith perspective, it’s hard to back the RAISE Act if you reflect on the words of the pope, who called on Americans during his 2015 apostolic visit “to not turn their backs on their neighbors.”

But the RAISE Act does just that by creating “obstacles to family unity for immigrant families and block access to safety for tens of thousands of refugees,” he said.

“We continue to call for immigration policies that support family unity, provide pathways to citizenship, and promote humane and just treatment of immigrants — the RAISE Act does not respond to this call,” said Kerr. 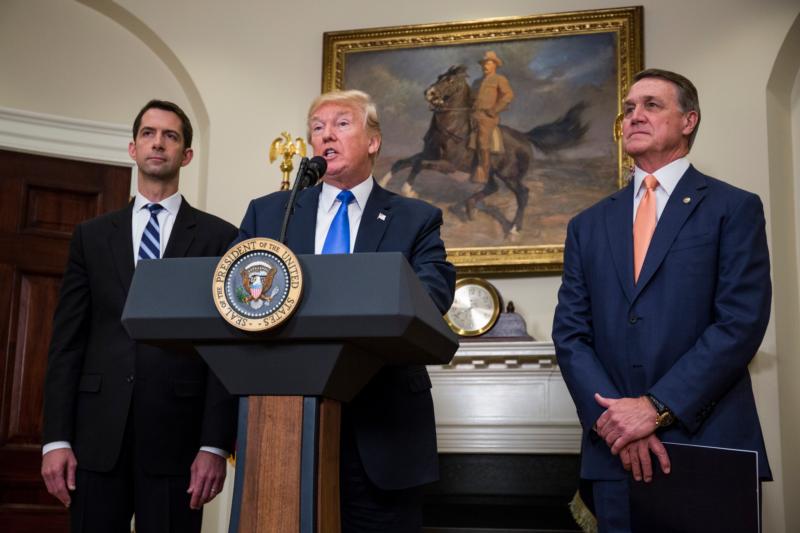 U.S. President Donald Trump makes an announcement on the introduction in the Senate of the Reforming American Immigration for Strong Employment Act, or RAISE, with Sens. Tom Cotton, R-Ark., and David Perdue, R-Ga., at the White House Aug. 2. (CNS photo/Zach Gibson, pool via EPA)

PREVIOUS: ‘Mission is all the time’: FOCUS ministry doesn’t stop with school year