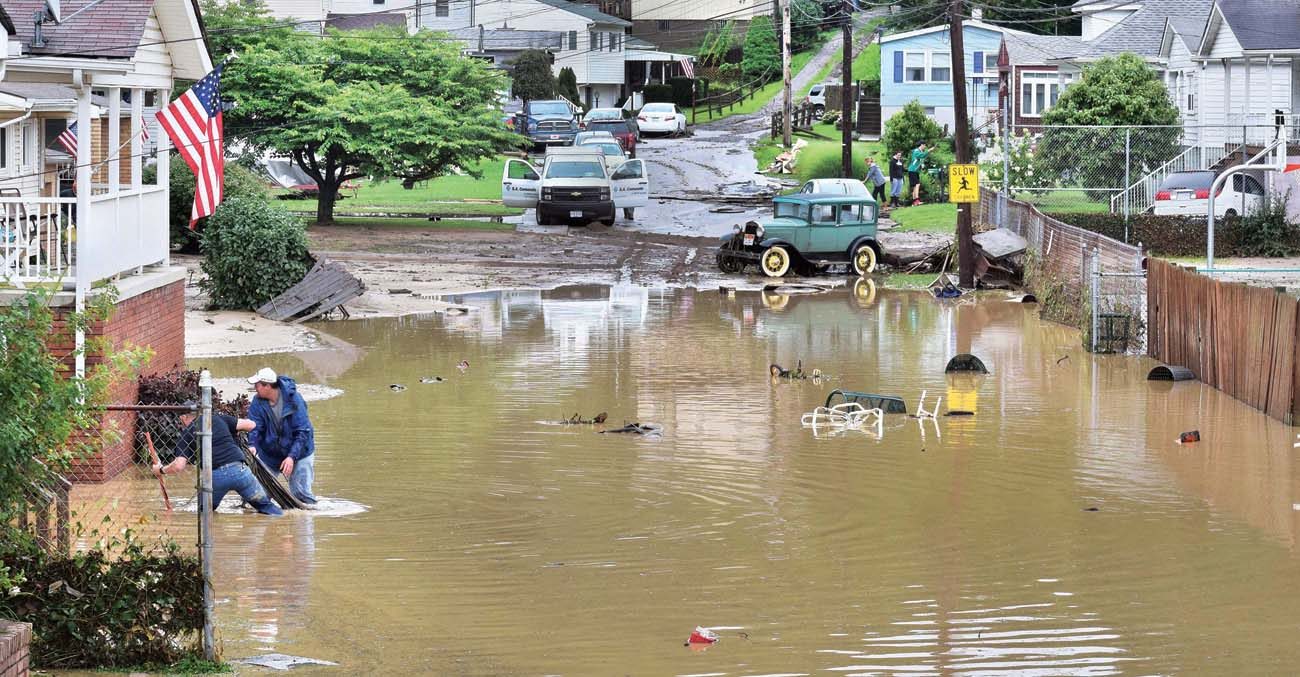 Men clear debris after flooding July 29 in McMechen, W.Va. As many as 400 homes and businesses in Marshall County sustained water damage. The worst of it was in McMechen, where runoff flowed down the hillside and flooded the town. (CNS photo/Scott McCloskey, courtesy of the Wheeling News-Register)

Heavy rains fell on both areas late July 28 and into the early morning hours of July 29, causing flash flooding and landslides that damaged homes and businesses.

Ohio County in the Panhandle was still recovering from flash flooding that occurred the evening of July 23 after 3 inches of rain fell in 36 minutes.

Bishop Michael J. Bransfield of Wheeling-Charleston offered his prayers and support for flood victims and for all those helping in recovery efforts.

“It is all too often that the good people of West Virginia are confronted with the horrific effects of flooding, and we now see this again,” Bishop Bransfield said. “I am praying for the families and individuals who are suffering because of the floods and for those who are working so hard to help them through this terrible time. We ask God to help all those affected by the flooding and those reaching out to them. May God bless all of you.”

West Virginia Gov. Jim Justice declared a state of emergency July 29 for Ohio, Marshall and Wetzel counties in the northern panhandle as well as Marion, Monongalia, Harrison, Taylor and Tucker counties in the north-central region. The governor’s office reported that first responders from across the state, the National Guard and West Virginia Division of Highways personnel were on the scene in affected areas.

Lou Vargo, emergency management director for Ohio County, said that almost 4 inches of rain fell on Ohio and Marshall counties July 28 and 29. McMechen in Marshall County was devastated by flash flooding that followed, and much of the town is caked with mud and debris. Vargo said the National Guard was set up in Ohio County and was working on recovery efforts in McMechen.

In Ohio County, the severe flash flooding July 23 led to two deaths. As flood waters rose, the car in which 24-year-old Michael Grow and 19-year-old Paige Gellner were traveling was swept into a creek. Grow died at the hospital a short time after being pulled from the creek. Gellner was missing for almost a week. Early July 29, officials announced her body was discovered at the mouth of Big Wheeling Creek, a tributary of the Ohio River.

On July 30, the governor toured the flood affected areas. In a statement released the day of the flooding, Justice said: “I of all people know how terrible these situations can be after experiencing the tragedy of the flooding in West Virginia during June 2016. But West Virginians are strong people and in this time of need we will do everything we can to aid our neighbors.

“After the waters recede we will work with them to begin clean-up and start the recovery process from this horrible devastation,” Justice said.

“I urge all West Virginians to join (first lady) Cathy (Justice) and I as we continue to pray for the safety and well-being of all of our citizens that have been impacted by this flooding,” he added.

To aid in recovery efforts, the Diocese of Wheeling-Charleston is working with Appalachian Outreach Inc. to assist volunteers helping with flood recovery in Marshall County. Beginning Aug. 4, the organization planned to use the former Bishop Donahue Memorial High School building as its command center for volunteer efforts.

Bishop Bransfield approved free use of the building for as long as Appalachian Outreach needed it, allowing volunteers to eat and sleep at the facility and to store all of their supplies for the cleanup effort.

“I hope this coordination will help speed the recovery for those residents who suffered extensive damage to their homes and property,” the bishop said. “All of those affected by the flooding in the region remain in my prayers and the prayers of the faithful across our Mountain State.”

Several groups from around the state and country were scheduled to come to the area in the next few weeks.

Catholic Charities West Virginia’s Disaster Services in Charleston also was assisting with recovery efforts and helping coordinate response through its participation in the West Virginia-Voluntary Organizations Active in Disaster.