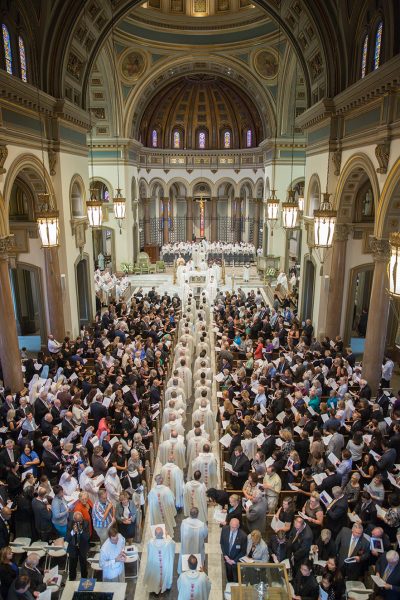 Clergy enter the Cathedral of the Sacred Heart to begin the funeral Mass for Richmond Bishop Francis X. DiLorenzo. (Photo courtesy of the Diocese of Richmond)

RICHMOND, Va. (CNS) — Bishop Francis X. DiLorenzo was remembered during his funeral Mass as the image of Christ, a shepherd who embraced the fullness of life and devoted himself to the people of the Catholic Diocese of Richmond.

Bishop Joseph A. Pepe of Las Vegas, a close friend for 50 years, told more than 1,000 people in the Cathedral of the Sacred Heart for the funeral Aug. 25 that he had come to honor an exceptional man.

“He was a person who had a depth, a really true acuity in perceptions of theology, in Catholic teaching, in church policy, pastoral life,” Bishop Pepe said. “He was a man who could take things and define them, see what he had to do and accomplish it. And you have the results of that in your diocese.”

Those results could be seen in a congregation reflecting the ethnic and cultural diversity of a diocese of 220,000 Catholics that runs from the mountains in the far southwest to the shoreline in the east. Among those at the funeral was Laura Bailey of South Hill, Virginia.

“A wonderful man, jovial, always had a smile,” she said. “He had the best intentions for the diocese.”

Bishop DiLorenzo’s brother, Paul, liked to remind “Fran,” as the family called him, that despite his education and position in the church, “he was just a kid from West Philly. Fran loved to eat, but he was nourished by human interaction and intellectual curiosity … and the need to keep trying to make the world a better place,” Paul DiLorenzo said.

Baltimore Archbishop William E. Lori, who presided at the Mass, praised Bishop DiLorenzo for his “wisdom and creativity.”

Clergy in white vestments flanked the altar and included Bishop Michael F. Burbidge and retired Bishop Paul S. Loverde, both of Arlington, Virginia; a priest from the Diocese of Honolulu; and bishops from Scranton, Pennsylvania, where Bishop DiLorenzo had served, and from the Archdiocese of Philadelphia, where he became a priest. Among the priests were many of the missionaries Bishop DiLorenzo arranged to bring from a host of other countries to keep some parishes open.

Bishop DiLorenzo was proud of the 22 priests he ordained, said Msgr. Walter Barrett, pastor of St. Mary Star of the Sea Parish in Fort Monroe, Virginia. “Some of us were a little jealous of the affection being shared with the young priests,” he said the day before the funeral, “but he knew that if younger clergy were not cared for and supported, we could lose them.”

The day before the funeral, the afternoon sun broke through the clouds as seminarians carried the bishop’s coffin into the cathedral through the main entrance framed by black bunting and to the front of the altar where he had presided for 13 years. His brown, wood crozier was placed to the side. 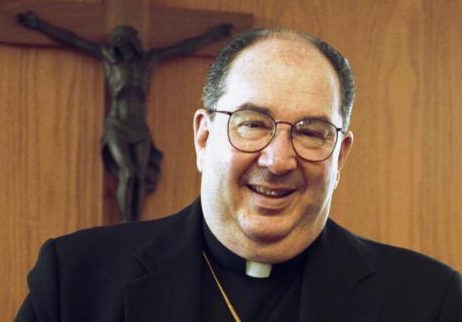 After the rite of reception, the service to receive the bishop’s body, family and friends and other mourners lined up to spend a few minutes at the open casket. Virginia Gov. Terry McAuliffe was among them.

“We didn’t always agree on all the issues, of course, but there were so many things that we did agree on,” the governor said outside the cathedral. “Medicaid expansion, providing health care for everyone and making sure everyone has an opportunity for a quality education. We had a good working relationship.”

“He had an eye for social justice despite what some may say,” Msgr. Mark Lane, who was named diocesan administrator Aug. 22, said in his homily at vespers a few hours later. “He saw poverty in southwest Virginia and said that their poverty is our poverty.”

Bishop DiLorenzo’s death from heart and kidney failure Aug. 17 came less than a week after the political violence in Charlottesville, Virginia, that he had condemned in clear, strong words.

Msgr. Lane said that to Bishop DiLorenzo, Charlottesville “symbolized a gathering of hatred, a gathering of supremacy rather than equality, where peace needs to enter to make its face known. … He would ask us if we are contributors in our hearts to such violence.”

Listing some of his many accomplishments — keeping parishes open, aiding Catholic education, fundraising — Msgr. Lane also recalled that the bishop liked to sing “Thanks for the Memory,” Bob Hope’s signature tune, “though he was always off-key.”

“We are far better as a church for having had him,” Msgr. Lane added. “Bishop DiLorenzo, we return you to God and it is with heartfelt gratitude that we say: thanks for the memories.”

Staniunas writes for The Catholic Virginian, newspaper of the Diocese of Richmond. 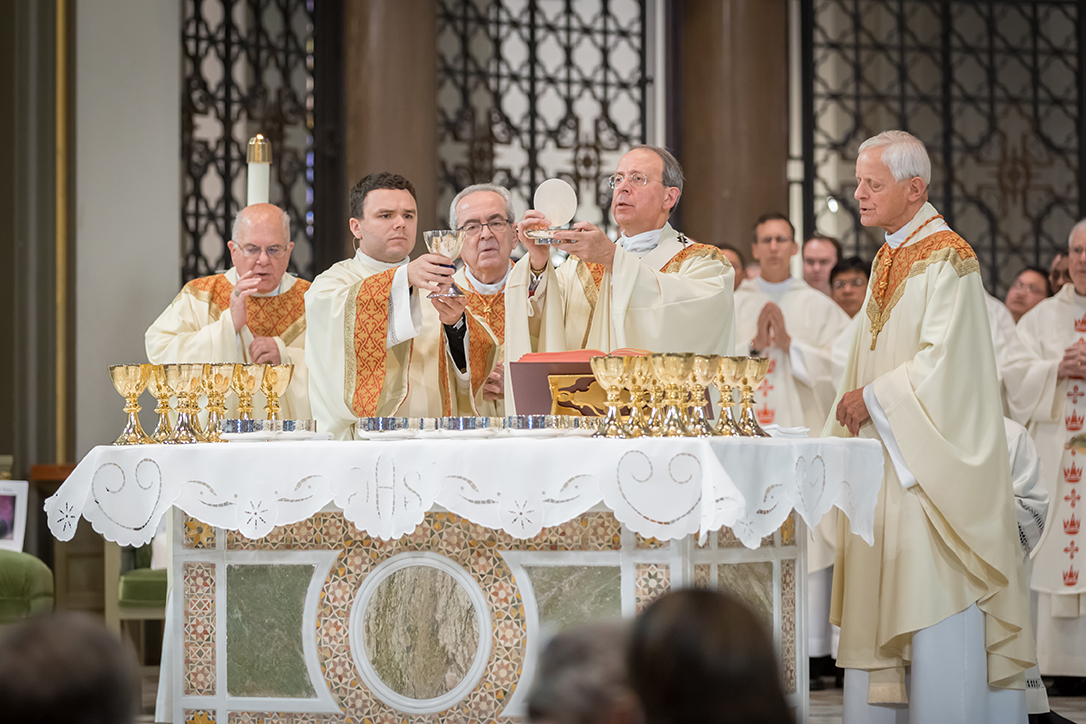 Archbishop William E. Lori of Baltimore (center, elevating the host), presided at the funeral that was also concelebrated by Cardinal Justin Rigali, the retired archbishop of Philadelphia (left of Archbishop Lori) and Cardinal Donald Wuerl of the Archdiocese of Washington. (Photo courtesy of the Diocese of Richmond)

PREVIOUS: Where to give to assist with Hurricane Harvey recovery