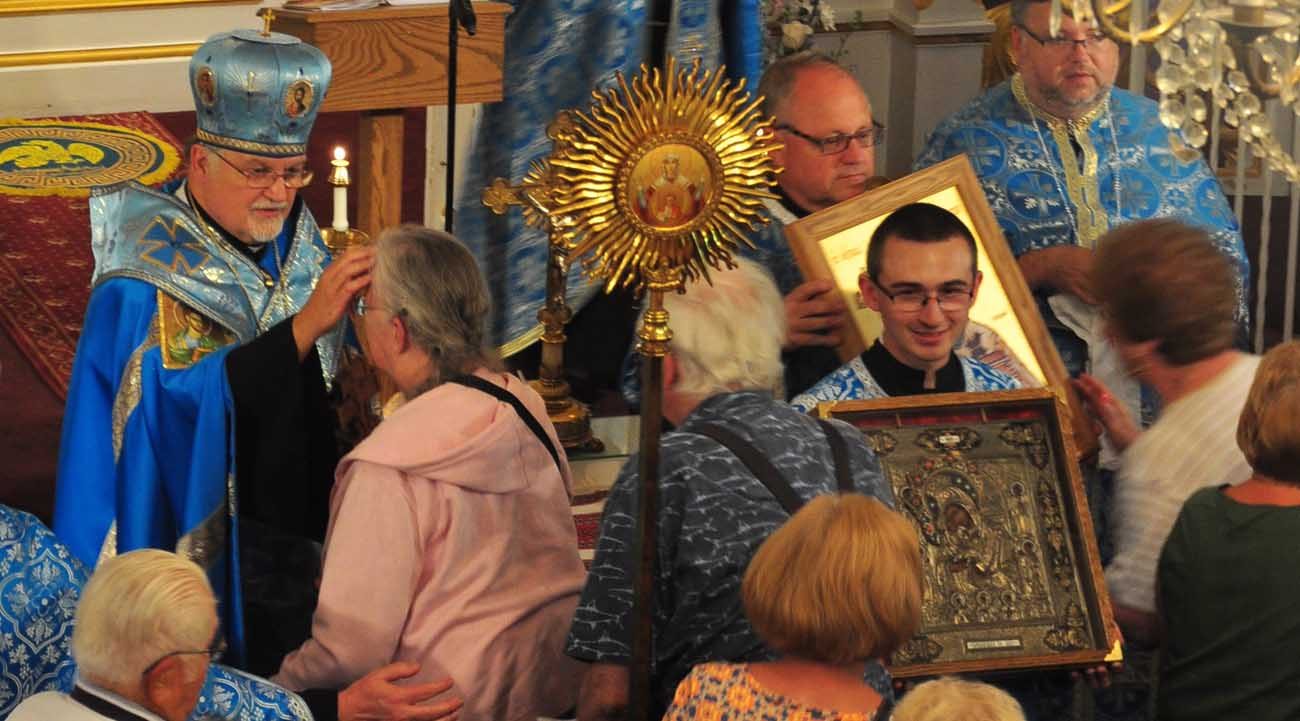 CENTRALIA, Pa. (CNS) — Only a few structures still stand in this nearly abandoned borough 62 miles northeast of Harrisburg. Even fewer are visible through the tree cover from the top of an adjacent mountain overlooking what was once a thriving community.

The most notable and recognizable structure is the Assumption of the Blessed Virgin Mary Ukrainian Catholic Church, with bright blue domes that rise out of the foliage on the side of the mountain. Though all but seven of the town’s residents relocated because of the continuing fire in the anthracite coal mine beneath its surface, the church continues to serve a successful and thriving parish.

Nearly 400 people made the Ukrainian Catholic Eparchy of Philadelphia’s pilgrimage to the little church Aug. 27 for the second annual “A Call to Prayer” on the eve of the Dormition of the Holy Mother of God.

The pilgrimage was the second since Major Archbishop Sviatoslav Shevchuk of Kiev-Halych, Ukraine, the leader of more than 5 million Ukrainian Catholics around the globe, visited the church Nov. 10, 2015. He was accompanied by Archbishop Stefan Soroka of Philadelphia, metropolitan of Ukrainian Catholics in the United States, and Father Michael Hutsko, pastor of the parish.

Archbishop Shevchuk felt a sense of true holiness at the church and expressed his desire for all people of faith to visit and share the same sanctity and serenity. Six months after the visit, he declared the church a holy pilgrimage site.

“This church is built on the top of solid rock,” Archbishop Soroka said at the time. “A rock of faith for the area, for these pilgrims, and that’s what we want everyone to benefit from here, that our Lord’s love for us in unending.

“Even in disaster, the church continues,” he said.

For the pilgrimage, people crowded into the church, built in 1912, and onto the grounds for the Divine Liturgy celebrated by Archbishop Soroka and local clergy. Outside the church, they followed along in prayer and song heard over large speakers.

“When one thinks of Centralia, two images come to mind — the mountain and the fire. This is providential, since many references to holy mountains and fire as the presence of God are found in sacred Scripture,” Father John Fields said during his homily.

“Today, as pilgrims to this holy mountain we come with open hearts, humility and faith to be in the presence of God and seek his grace and his blessings for our needs,” Father Fields told the faithful.

After the liturgy, the pilgrims processed from the church to an outdoor chapel that held an 18th-century replica of the miraculous Our Lady of Pochaev icon. A long line of pilgrims waited to pray before it.

Conventual Franciscan Father Martin Kobos, pastor of Mother Cabrini Church in Shamokin, Pennsylvania, offered a reflection on the living rosary. He held up a photo of his meeting with St. John Paul II and then took out something even more special — a rosary given to him by the saint.

Msgr. James T. Melnic led the Akafist to the Dormition of the Mother of God before the Holy Shroud of the Dormition as pilgrims spilled out of the outdoor chapel.

The service was followed by a candlelight procession with the icon to the church for a Moleben prayer service to the Mary led by Archbishop Soroka.

During his homily, Archbishop Soroka recalled the words of Mary to the servants at the wedding feast at Cana: “Do whatever he tells you.” It’s the same advice Mary gives to the faithful today, he said, “to follow Jesus and to do what he inspires us to do.”

Afterward, participants were anointed with the holy oil and venerated the icon as well as the icon and relics of Blessed Nicholas Charnetsky, a martyr of the church who was beatified by St. John Paul in 2001.

Pilgrims traveled from as far as Philadelphia, Washington and New Jersey to focus on their spiritual lives during the afternoon.

The procession was the moment Marsha Brubaker of Lancaster, Pennsylvania, had been waiting for. She and her husband, Phil, made the pilgrimage after reading about the event in the faith section of a local newspaper.

“It’s visually powerful when you see so many people praying for peace and praying for others; it’s outstanding,” she said.

Making the trip from Philadelphia for the second year was Eugene Borys and his family, who received individual blessings from Archbishop Soroka. Borys’ son is a seminarian and joined the pilgrimage with five seminarians from St. Josaphat Ukrainian Catholic Seminary in Washington.

Mary Theresa Mattu, 83, of nearby Mount Carmel, Pennsylvania, was raised in the parish, being baptized and married there. It is also where her parents are buried. She still attends Divine Liturgy at the church.

Barbara Liparela of Shavertown, Pennsylvania, attended as a member of the choir from St. Mary’s Ukrainian Catholic Church in McAdoo, Pennsylvania, which sang the responses during the Divine Liturgy.

Several languages could be heard being spoken during the pilgrimage, reminding those on the grounds of the feast of Pentecost, when the common language understood by all was that of faith.

NEXT: Prayers, aid offered amid floods as Texas parishes grapple with Harvey