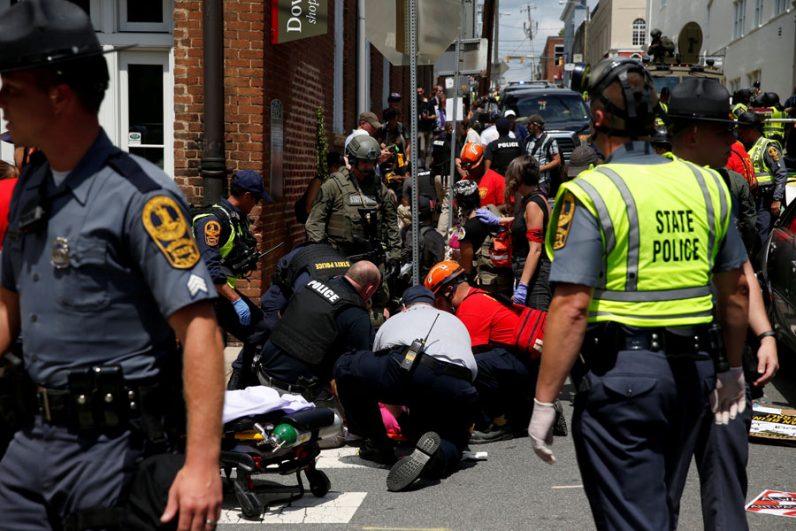 Rescue workers assist people who were injured when a car drove through a group of counter-protesters during a white nationalist rally in Charlottesville, Va., Aug. 12. Cardinal Daniel N. DiNardo of Galveston-Houston, president of the U.S. Conference of Catholic Bishops, condemned the violence and hatred and offered prayers for the family and loved ones of the person who was killed, and for all those who were injured. (CNS photo/Joshua Roberts, Reuters)

WASHINGTON (CNS) — In the aftermath of a chaos- and hate-filled weekend in Virginia, Catholic bishops and groups throughout the nation called for peace after three people died and several others were injured following clashes between pacifists, protesters and white supremacists in Charlottesville, Virginia, Aug. 11 and 12.

A 32-year-old paralegal Heather D. Heyer was killed when a car plowed into a group in Charlottesville on Saturday. Various news outlets have identified the driver as James Alex Fields, who allegedly told his mother he was attending a rally for President Donald Trump.

Reports say the car allegedly driven by Fields plowed into a crowd during a white nationalist rally and a counter-rally the afternoon of Aug. 12.

Attorney General Jeff Sessions said early Aug. 14 the “evil attack” meets the legal definition of domestic terrorism and suggested pending charges for Fields who was in custody and has been charged with second-degree murder, among other charges. He was being held without bail.

The bishop of the Catholic Diocese of Richmond, Virginia, was one of the first to call for peace following the violence in Charlottesville late Aug. 11, which led to the events the following day.

On the evening of Aug. 11, the Associated Press and other news outlets reported a rally of hundreds of men and women, identified as white nationalists, carrying lit torches on the campus of the University of Virginia. Counter-protesters also were present during the rally and clashes were reported.

The following day, at least 20 were injured and the mayor of Charlottesville confirmed Heyer’s death later that afternoon via Twitter after the car allegedly driven by Fields rammed into the crowd of marchers. Two Virginia State Police troopers also died when a helicopter they were in crashed while trying to help with the violent events on the ground.

“In the last 24 hours, hatred and violence have been on display in the city of Charlottesville,” said Richmond Bishop Francis X. DiLorenzo in a statement on the afternoon of Aug. 12. “I earnestly pray for peace.”

Charlottesville is in Bishop DiLorenzo’s diocese. He is a former Philadelphia priest and former rector of St. Charles Borromeo Seminary.

Virginia’s governor declared a state of emergency Aug. 12 when violence erupted during the “Unite the Right” white nationalist protest against the removal of a statue of a Confederate general, Gen. Robert E. Lee. But the trouble already had started the night before with the lit torches and chants of anti-Semitic slogans on the grounds of the University of Virginia.

Archbishop Charles J. Chaput of Philadelphia said racism was the “poison of the soul,” and said in a statement that it was the United States’ “original sin” and one that “never fully healed.”

He added that, “blending it with the Nazi salute, the relic of a regime that murdered millions, compounds the obscenity.”

Cardinal Daniel N. DiNardo of Galveston-Houston, president of the U.S. Conference of Catholic Bishops, called the events “abhorrent acts of hatred” in an Aug. 12 statement. He said they were an “attack on the unity of our nation.”

Other groups, including many faith groups, seeking to counter the white nationalist events showed up during both events. Authorities reported clashes at both instances.

“Only the light of Christ can quench the torches of hatred and violence. Let us pray for peace,” said Bishop DiLorenzo in his statement. “I pray that those men and women on both sides can talk and seek solutions to their differences respectfully.”

On Twitter, Jesuit Father James Martin denounced racism as a sin and said: “All Christians, all people of faith, should not only reject it, not only oppose it, but fight against it.”

Other bishops quickly followed in denouncing the violence.

“May this shocking incident and display of evil ignite a commitment among all people to end the racism, violence, bigotry and hatred that we have seen too often in our nation and throughout the world,” said Bishop Martin D. Holley of Memphis, Tennessee, in an Aug. 13 statement. “Let us pray for the repose of the souls of those who died tragically, including the officers, and for physical and emotional healing for all who were injured. May ours become a nation of peace, harmony and justice for one and all.”

Chicago’s Cardinal Blase J. Cupich said Aug. 12 via Twitter: “When it comes to racism, there is only one side: to stand against it.”

On Aug. 13, Cardinal DiNardo, along with Bishop Frank J. Dewane of Venice, Florida, chairman of the USCCB Committee on Domestic Justice and Human Development, issued a statement saying: “We stand against the evil of racism, white supremacy and neo-Nazism. We stand with our sisters and brothers united in the sacrifice of Jesus, by which love’s victory over every form of evil is assured.” 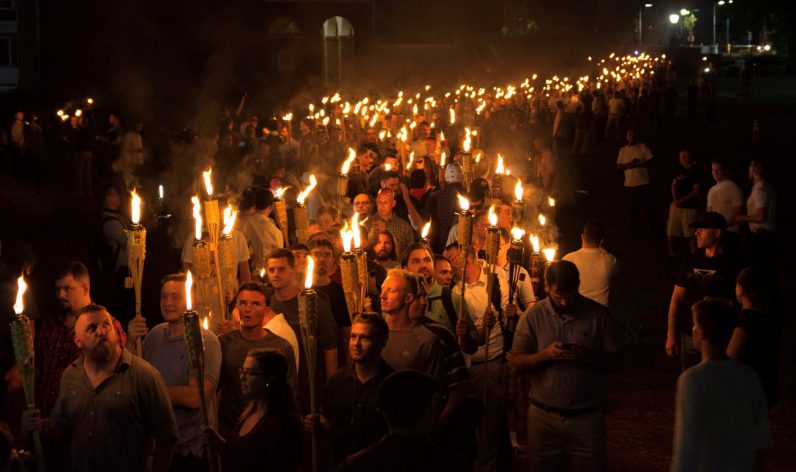 White nationalists carry torches on the grounds of the University of Virginia in Charlottesville, Va., Aug. 11 over a plan to remove the statue of a Confederate general from a city park. (CNS photo/Alejandro Alvarez, News2Share via Reuters)