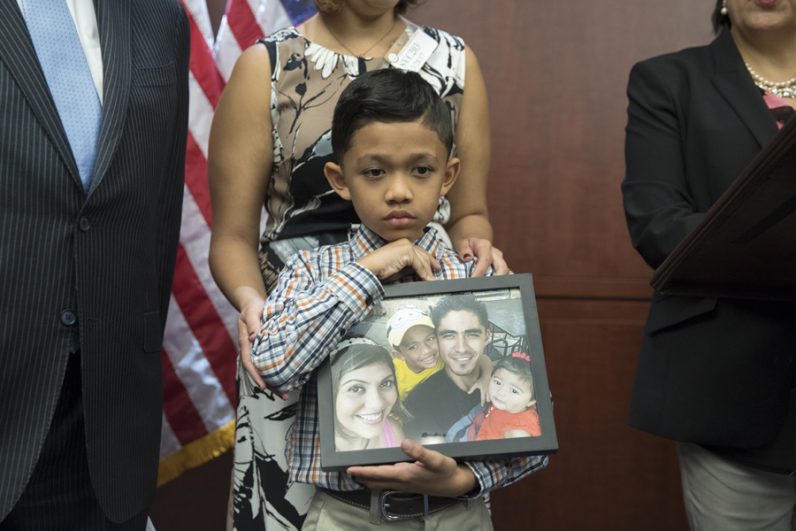 Seven-year-old Walter Escobar of Texas holds a photo of his family, including his father, Jose Escobar, who was deported from the U.S., during a late March news conference on Capitol Hill in Washington. (CNS photo/Michael Reynolds, EPA)

WASHINGTON (CNS) — The stories come in dribs and drabs on the evening news or in timelines via Twitter, but they’re steady.

At some point, they all had contact with immigration authorities, but none had criminal records or a violent past, and regularly checked in with Immigration and Customs Enforcement, known as ICE, to inform the agency of their whereabouts.

During President Barack Obama’s administration, migrants like them, in the country without documentation, were not priorities for deportation, said John Sandweg, former acting director of ICE. They had been granted stays or were under supervision by immigration officials likely for humanitarian reasons — they were taking care of family or had extenuating circumstances.

“Individuals in this group had mostly been checking in with us … very rarely are these individuals convicted criminals,” said Sandweg during a July panel titled “Immigration Policy and Practice Under the Trump Administration: Understanding What’s New, What’s Not and Why It Matters,” sponsored by the Washington-based immigration reform group America’s Voice.

Under President Donald Trump, however, the fate of these migrants has changed, said Sandweg.

But it’s part of a strategy, Sandweg believes, by the Trump administration to increase the total number of deportations to record levels — a task that will be difficult to match since Obama was given the moniker “deporter-in-chief” because of the record-breaking 2.5 million deportations that took place under his administration.

“It’s very clear to me that their mission is to transcend the number of deportations. How do you do that? You don’t focus on criminals,” said Sandweg. “Criminals are slow to remove. Criminals who are at-large are very difficult to find and it’s very time-consuming. It’s time-consuming, difficult work.”

Some migrants and their supporters already are sensing the shift in focus.

In early August, when Maria De Loera was called to a deportation hearing in Texas, Bishop Mark J. Seitz of El Paso attended the meeting in her place so she could stay at the bedside of her cancer-stricken 8-year-old daughter at the hospital. De Loera left Mexico in 2014 after her husband was assassinated and fled to the U.S. looking for asylum, which was later denied.

Some supporters had feared De Loera would immediately be deported if she showed up to the meeting with immigration officials, meaning her daughter would be left to attend cancer treatments alone at the hospital.

After Bishop Seitz met with immigration officials, De Loera was granted a six-month stay so she could continue to care for her daughter. These days, it seems as if “the most obvious humanitarian reasons for allowing a person to stay are no longer sufficient,” said the bishop, while also expressing worry about the people who seem to be the new focus of deportations.

“The church certainly is going to be very concerned about action leading to prioritization of people who are really not any threat and who have not committed any crime, and who are productive members of our community,” Bishop Seitz said in an Aug. 7 phone interview with Catholic News Service.

The emphasis, he said, should be on criminals “who are really a threat to our citizens,” not spending time and energy going after people who are law-abiding.

David Leopold, partner and chair of the Immigration Practice Group and former president of the American Immigration Lawyers Association, said the Trump administration would like others to believe “we’re focusing on criminals. That’s our priority.”

But the focus is on “non-criminals, folks who have worked hard, have done everything they were supposed to do, played by the rules, have been here for a long time,” said Leopold, who also was part of the America’s Voice panel. “They’re the easiest to arrest because they comply. They’re going after those cases.”

And while there may not be much talk about raids taking place, they’re happening in the lobbies of immigration offices, he said.

“I call them silent raids because where they’re occurring is at these check-ins,” said Leopold.

While fathers and mothers and children wait for their ICE removal officers, meetings that never yielded unusual developments now turn into meetings in which many have ankle bracelets placed on them, and given a date to leave, he said.

In a July 31 essay for America, a national Catholic magazine run by the Jesuits, Kevin Appleby, senior director of international migration policy at the Center for Migration Studies of New York, said that under the Trump administration, Catholics must shift their focus toward opposing mass deportations because it’s clear that under this presidency, steps have been taken “to implement a major deportation campaign targeted at all undocumented immigrants, including the population the U.S. bishops have sought for years to make citizens.”

For fiscal year 2018, the administration has asked for 1,000 more ICE agents, 500 more Border Patrol agents, plus more than 10,000 more detention beds, not to mention $1.6 billion for a border wall, wrote Appleby.

“It is clear where this administration is headed on immigration,” he wrote. “The goal is not to legalize 11 million undocumented persons but to get rid of them.”

While some bishops have been on the front lines during critical moments involving the deportation of noncriminal migrants who have been long-term residents and contributing members of certain communities, Appleby urged the participation of all bishops, so as to have a plan for what to do when deportations take place in their respective dioceses and to lead other Catholics to support vulnerable immigrant families.

“We are entering a dangerous time in the history of our immigrant nation,” Appleby wrote. “The stakes for our immigrant brothers and sisters, and their children, are high. History will judge whether Catholics stood up and protected their neighbors during this dark period.”

Parishes are a great place to talk about those issues, to listen to “unheard narratives,” said Bishop Seitz, while acknowledging that sometimes it feels as if people are listening to two different Gospels in church pews: one that says we have limited resources and we have to protect ourselves from outsiders, and one that says we’re called to love others. But a person cannot call him or herself Catholic without expressing the compassion of Jesus, he said.

“I don’t think those elements are to be found in the dumbed-down Gospel that’s out and about today,” he said.

NEXT: Catholics on Guam pray for peace amid threats by North Korea