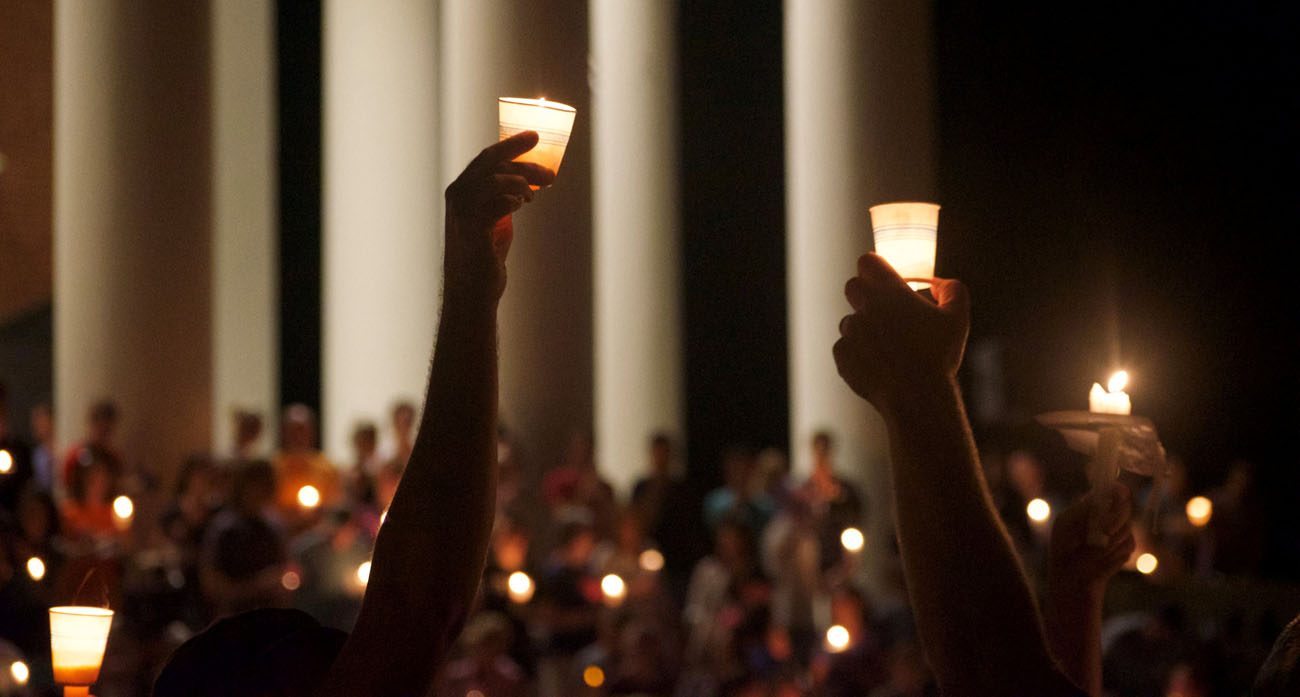 Community members in Charlottesville, Va., hold a vigil for Heather Heyer Aug. 16. She was killed Aug. 12 during a white supremacist protest over a plan to remove the statue of a Confederate general from a city park. (CNS photo/Kate Bellows, The Cavalier Daily via Reuters)

WASHINGTON (CNS) — After the weekend of mayhem in Charlottesville, Virginia, the town’s college Catholic community was wondering — like many others around the nation — what to do.

The protest and counterprotests making national news were unfolding right in their hometown and the rally’s torch-lit march and angry chants the night of Aug. 11 were even closer to home — on the grounds of their campus, the University of Virginia.

“We started to come together as a community Saturday night and Sunday, saying how do we respond?” said Dominican Father Joseph-Anthony Kress, University of Virginia’s Catholic chaplain.

“As a Catholic community, we had to start with prayer and that’s what we did,” said the priest, who was reached by Catholic News Service at a student-leaders’ retreat off campus Aug. 16.

Although the campus had not started its fall semester and new and returning students had not moved in Aug. 12 when the white supremacist rally was taking place in Charlottesville, there were still some students on campus as well as faculty and staff, and about 250 of them gathered for a prayer vigil and rosary for peace Aug. 13 at St. Thomas Aquinas, the university’s parish church.

The prayer service was in direct contrast to what had just happened the previous day when a car plowed through a crowd of counterprotesters, killing one woman and injuring more than 19 others. Two state troopers monitoring the events also died in a helicopter crash.

Father Kress described the prayer service as a chance to “be united in prayer in God’s presence to ask for forgiveness and mercy and the strength to let his peace reign first and foremost in our hearts and in the community.”

“Walking out of that prayer vigil was a beautiful moment for me because of the lively spirit of those who came together,” he said, adding that he was full of Christian hope and believed from seeing the people there praying that “we can overcome evil with good if we stand together.”

That’s not to say he doesn’t know there’s a rough road ahead. As he put it in an understatement: “It’s obviously been a tough week here in Charlottesville.” He also said the Catholic campus community appreciated and needed the prayers and support from across the country.

He noted that tensions have been building since there had already been protests over the town’s decision to remove a statue of Confederate Gen. Robert E. Lee from a downtown park, but he also put the eruption of tensions Aug. 12 in a spiritual context, saying it “helps us realize how far we are from the kingdom of God.”

“That stark realization can help us refocus,” he added, noting that the path ahead is not insurmountable with faith.

Dominican Father Joseph Barranger, pastor of St. Thomas Aquinas Parish, had a similar message posted on the parish website Aug 13, stating: “These terrible events show us how far we still are from the kingdom of God. So much work still needs to be done in advancing the kingdom through prayer, personal example and corporate witness in our parish that defends the unborn, the poor, the elderly, the infirm, those on the margins of society and all who are different from us.”

The priest, who was out of town during the weekend of the “Unite the Right” rally, said he was “horrified, saddened, and sickened by the outbreak of racial violence and hatred that has taken place here.”

Father Kress was out of town Aug. 12, celebrating a military funeral Mass for a student’s father in Williamsburg, Virginia. He was struck by the sharp contrast of leaving the somber service and hearing about the chaos erupting in Charlottesville on his drive back.

The days after the rally had been busy with student retreat activities, preparations for move-in days beginning Aug. 18 and events for the new school year sponsored by the Catholic student center.

But in the midst of such events. there also would be discussion of what just took place, which had already been a major topic at a student-leader retreat, the chaplain said.

“We are going to address it and support each other, making sure this type of sin, hatred and evil doesn’t become a defining part of our community,” he said.

He is convinced this can happen too, because he said the students with whom he had already spoken are hopeful and determined not only to move forward but to “help wounds to heal.”