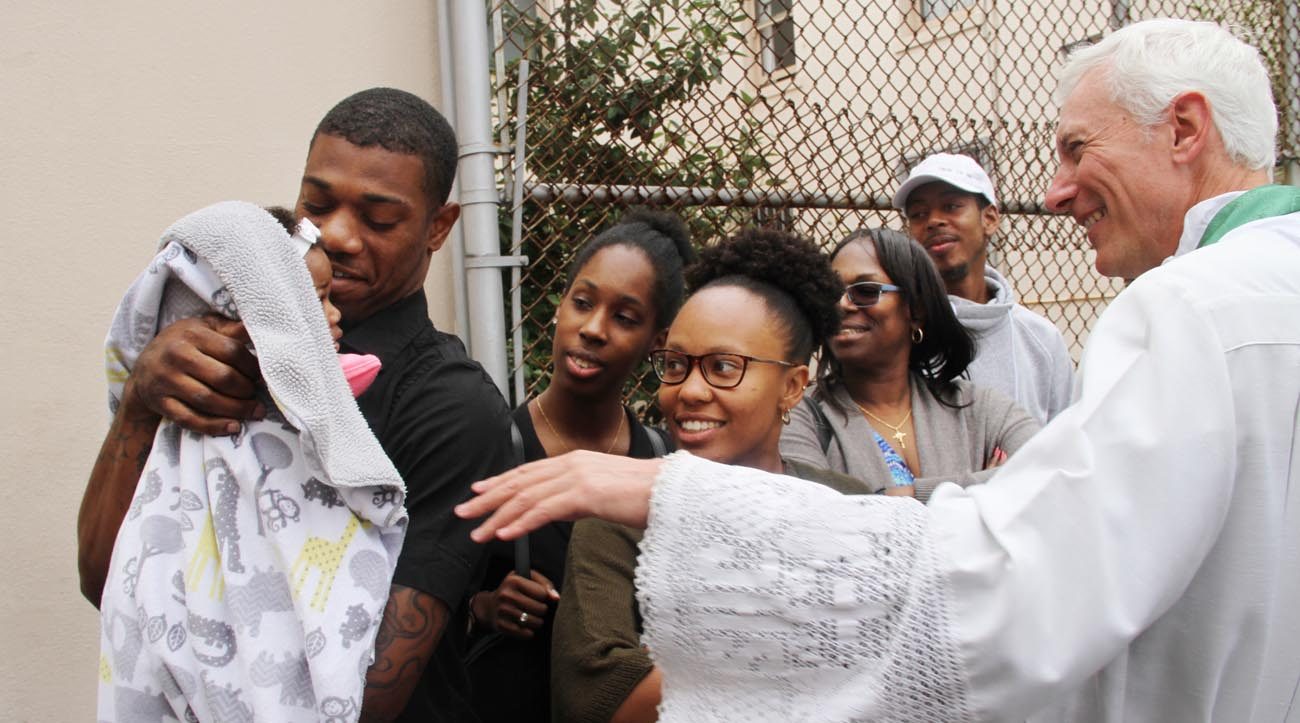 SAN FRANCISCO (CNS) — On the solemnity of the Annunciation this past spring, San Francisco Archbishop Salvatore J. Cordileone dedicated the Star of the Sea Church’s renovated St. Joseph Adoration Chapel, calling it “a pivotal moment in the history of the parish.”

“We want to base the renewal of our parish around the holy Eucharist,” said Father Joseph Illo. “Our mission statement is to evangelize God’s people beginning with the gift of the holy Eucharist. That means putting a lot of energy into our music, our preaching, our Sunday Mass.”

Three years after Father Illo was appointed parish administrator in August 2014, bringing his powerful commitment to traditional Catholic practices to the famously progressive city, Mass attendance and number of parishioners registered have increased about 10 percent each year.

“For the first time in my life, I feel I belong to a parish, I mean really belong,” said Eva Muntean, Walk for Life West Coast co-chair, who organizes street evangelization twice a month at a farmers’ market not far from the church.

One of Father Illo’s first actions was to open the Romanesque-style church from 6:30 a.m.-5:30 p.m. daily, improve the lighting and turn on the heat. “Now people can stop in, light a candle,” Father Illo told Catholic San Francisco, the archdiocese’s newspaper.

When he arrived, the parish founded in 1887 in the city’s Richmond District was struggling. Despite its location facing a busy boulevard, its doors were closed most of the day except for Mass times.

The parish has been one of the first to meet its Archdiocesan Annual Appeal goal each year, and the offertory has more than doubled. There is a new Knights of Columbus chapter, revitalized homeless outreach, Gabriel Project for pregnant women in need, a young adults group, and a speaker and a film series as well as Filipino and Chinese parish groups. Masses in English and Latin feature Gregorian chant and polyphony.

“We have served under seven pastors, all very different. And we’ve seen the parish go through many transitions of growth and decline and rebirth again,” said Lorna Feria, an accountant who is also parish director of faith formation. She and her husband, Bud, who have five children, joined the parish 26 years ago. “It’s a rebirth again.”

Confessions are available before every Mass. “That’s brought a lot of people in,” Father Illo said. There are coffee and doughnuts, Mexican, Chinese or Filipino treats after most Sunday Masses.

“We are offering a style of worship that is more traditional and more classical, but it is also revivifying the neighborhood,” said Father Illo, who was appointed to start an Oratory of St. Philip Neri, a project later put on hold. “We put money into professional musicians” and are building up the volunteer choir, Father Illo said.

The priests at Star of the Sea distribute Communion at the Communion rail. In Lent, Father Illo began an experimental period of celebrating Mass “ad orientem,” meaning the priest faces the high altar and crucifix during the parts of the Mass where the priest and people address God. While extraordinary form Latin Mass was instituted earlier, there are now two Masses on Sunday and one daily celebrated using the 1962 Roman Missal, known commonly as the Tridentine rite, in addition to English Masses.

Shortly after his appointment, Father Illo ignited controversy when he decided to train only boys and men for altar service going forward, coming at the time Archbishop Cordileone was receiving negative publicity associated with Catholic high school teachers’ contract talks.

“Serving as an altar server is a feeder for the male-only priesthood, and helpful in forming boys in leadership, much as girls-only programs at many of our schools,” Father Illo said in an interview. Today the negative publicity has abated, and he said as many as 10 altar servers serve at extraordinary form Latin Masses.

Three men from Star of the Sea have applied to the archdiocesan seminary program and another entered the Dominican novitiate Aug. 15. One young man who had been serving Mass from the parish had just enrolled at St. Patrick’s Seminary & University the August that Father Illo arrived.

“I bought a house in Richmond. One of the determining factors was I wanted to be in the same neighborhood so I would be easily accessible to Star of the Sea Parish,” said Marcus Quintanilla, an attorney who relocated from Southern California, teaches Rite of Christian Initiation and spends part of Wednesday evening in eucharistic adoration with his fiancee.

In a party that lasted to 2 a.m., the parish roasted a goat, served homemade sangria and had a mariachi band to welcome the 13 new Catholics, most young adults, who entered the church at Easter Vigil this year.

“I was fading from the faith and now I am back,” said Mariella Zevallos, an artist and teacher who was just hired as full-time stewardship coordinator for the parish. “I know so many people in the parish and it makes me so joyful,” Zevallos said.