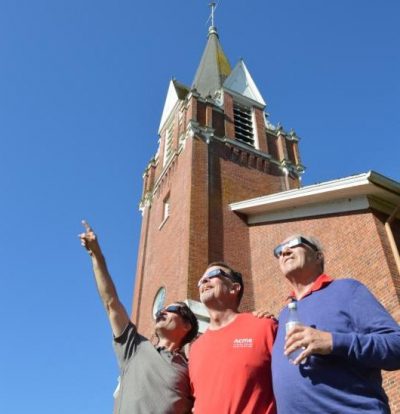 Pete Hamlin, Greg Clemmons and John Hedlund view the solar eclipse Aug. 21 in front of St. Paul Church in St. Paul, Ore. They were interested in the history of the 1846 church as well as the eclipse. (CNS photo/Ed Langlois, Catholic Sentinel)

Built in 1846, St. Paul Church in the small town of St. Paul was already venerable the last time it was in an eclipse path of totality in 1918. The brick building, restored after a 1993 earthquake, stood silent and strong Aug. 21 as the crowd around it cheered and cried out during the eerie minute that the moon blotted out the sun’s light.

“God puts on the best shows!” one woman called out.

While the heavens were creating awe, Msgr. Gregory Moys was providing for creature comforts of visitors. Some towns in the eclipse zone provided portable bathrooms, but that was a bit much for the city of St. Paul to afford. Msgr. Moys, pastor of St. Paul Parish, opened up the back door of the 171-year-house of worship so viewers could find relief in a set of rooms once used by Oregon’s pioneer priests.

One Vancouver, Washington, family made the trip and sat happily in front of St. Paul Church.

“It’s a memory they’ll have for a long time,” James Longfellow said of his wife and children. Longfellow’s 8-year-old daughter, Analise, feared she might forget. Her parents assured her she’d remember.

Pete Hamlin, a member of St. Matthew Church in Hillsboro, recalled trying watch a 1979 eclipse as a child, but the Oregon skies were cloudy.

“This is a good opportunity,” Hamlin told the Catholic Sentinel, newspaper of the Archdiocese of Portland. He came to St. Paul with friends Greg Clemmons and John Hedlund.

While the solar event was stunning, the trio spent much of their time before looking over the old brick church and discovering its history.

The edifice replaced a log church that had been built in 1836 by settlers who had written Catholic officials in the East repeatedly before two missionaries were sent from Quebec — Fathers Francis Blanchet and Modeste Demers. Native American workers helped make the bricks that are still in good shape.

On April 25, 1846, a month before the cornerstone was laid, a partial solar eclipse was visible in St. Paul.