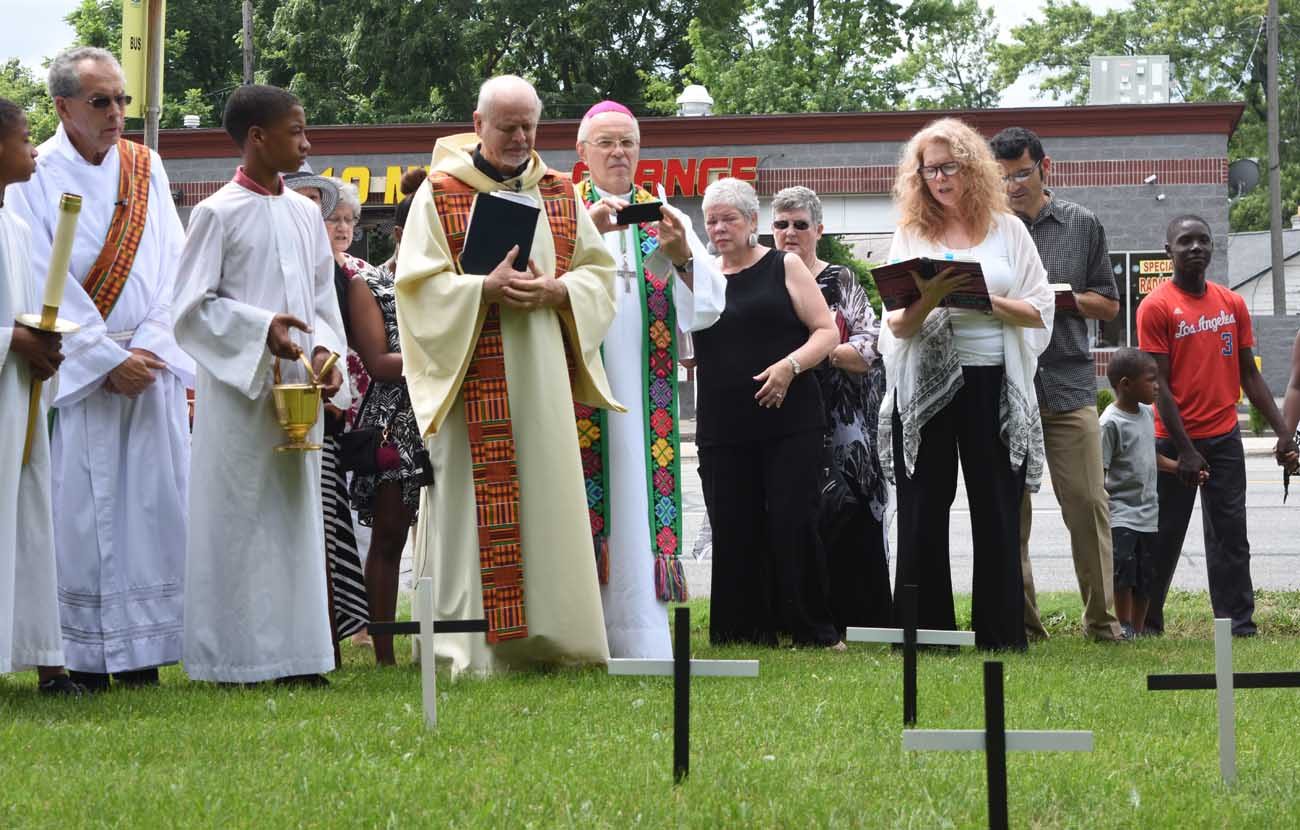 Father Victor Clore and members of Christ the King Parish in northwest Detroit pause for a moment of silence July 22 in front of 44 crosses on the parish's front lawn, one for each of the lives lost in the violence of 1967. (CNS photo/Dan Meloy, The Michigan Catholic)

DETROIT (CNS) — The bell tolled 44 times. One time for every name that was read.

They were brothers and sisters, fathers and uncles, young and old. Whether they were “looters” or “bystanders,” 50 years later, they were people gone, but not forgotten.

On July 23, Christ the King Parish and others in northwest Detroit commemorated the 50th anniversary of the 1967 riot — some in the community call it the 1967 rebellion.

Whatever semantics people choose, 44 souls were lost in its aftermath. And 50 years later, parishioners — black and white — came together to remember the dead.

“Today we’re experiencing a deep, lasting look at the reverberations of that hot, July day,” the lector read at the beginning of Mass. “As we remember 1967, we need to remember the Mass is a remembrance of Jesus’ life, passion and death, but also of His resurrection. We, too, remember in hope the life and resurrection today for all those who were lost.”

The Mass featured testimonials from parishioners who lived in the area, recalling their limited perspective on a day that shook the city to its core.

“I grew up on Lothrop, just north of the Boulevard,” parishioner Amanda Rajabzadeh said. “My grandma lived five houses off 12th Street and Clairmount Avenue. We attended St. Agnes Parish, which was three blocks from where we lived. Being 10, I remember it being hot. We slept on pallets that night, staying indoors, because all of the shooting going on outside.”

Archbishop Allen H. Vigneron, in a letter to the faithful of the Archdiocese of Detroit, called on Catholics to “lift our city, our region and one another in prayer” in remembering the events.

“Let us also pray for those touched by the violence of 1967, especially those who lost their lives, their loved ones, those displaced and those marginalized,” the archbishop wrote. “Let us ask for the intercession of our patroness, St. Anne, as we mark this anniversary, and pray that the grace of healing, reconciliation and brotherhood take deeper root in every heart across our archdiocese.”

In helping break down cultural barriers, Archbishop Vigneron urged participation in the July 31-Aug. 5 Life Remodeled neighborhood cleanup project in the neighborhood where the violence began.

Parishioner Clara Rich recalled what the social scene was like in Detroit before the riot, saying tensions between the white and black communities were present with rise of the civil rights movement. But she also recalled a moment of hope in the community, when the Jesus statue outside Sacred Heart Seminary was painted black, a reflection of the surrounding community.

After Mass, Christ the King’s pastor, Father Victor Clore, led the congregation to the parish’s front lawn, where 44 black and white crosses were planted, representing the victims of the violence.

“We gather here not only to remember those who were lost, but to reflect on what do we do from here,” Father Clore said. “We have an opportunity at the parish to go out into the community and share the Gospel message, to share resources in the community, to let people know we are here.”