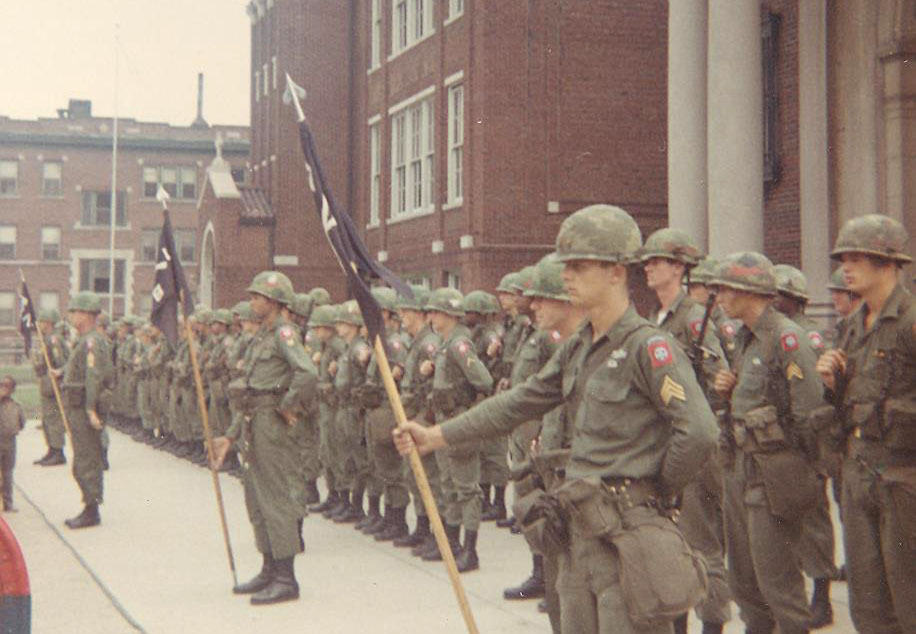 National Guard and Army troops from the 82nd Airborne Division stand at attention outside St. Rose of Lima Church on Detroit’s east side during the 1967 Detroit uprising. Fifty years later, the effects of 1967 still loom large as the church and city seek to heal the wounds of the past. (CNS photo/Archdiocese of Detroit Archives)

After visiting family in Ohio, Carr and her family were driving back to Detroit when they heard the news on the radio. Twelfth Street was on fire.

“There was tons of smoke; I remember a lot of National Guard everywhere, naturally,” Carr said. “I was going to see one of my daughters who lived on Santa Rosa when I saw the National Guard open fire on people. I was almost killed; I saw (the National Guard) kneeling down and my sister-in-law pulled me into a house. What I remember was the smoke we saw from the guns.”

The riot/rebellion of July 23-28, 1967, reverberates through Detroit today. Shattered windows and broken storefronts turned into shattered souls and broken hopes, as a city tore itself apart from racial and social divides that still haven’t been fully healed today.

“I was a parishioner at Church of the Madonna at the time of the rebellion,” said Carr, who today attends St. Charles Lwanga Parish on the northwest side. “At the time, the church was more focused on Catholic ritual than it is today. But I remember Father (Charles) O’Neill, talking about need to heal the racial divisions at the time.”

Many other priests, from Father Bill Cunningham to Msgr. Thomas Finnegan to Father Norm Thomas were and still are at the forefront of social activism.

After the chaos and violence, it was left to pastors and priests in the city to bring a sense of clarity to a population rocked by civil unrest and justified anger.

Father Victor Clore, today pastor of Christ the King Parish in northwest Detroit, was an associate pastor at St. Francis de Sales in 1967.

“The neighborhood where I was assigned was in the process of African-Americans first purchasing homes in the area,” Father Clore recalled. “The so-called ‘white flight’ was already happening before the riot began, and our neighborhood was in a transition phase.”

Father Clore and his fellow priests at St. Francis de Sales worked with clergy from the local Lutheran and Presbyterian churches to organize community meetings to discuss racial and social issues.

A point of contention was the real estate industry selling a home in a predominately white neighborhood to a black family. After the black family moved in, Father Clore said white parishioners at St. Francis de Sales would receive offers to sell their homes and move out to the suburbs at an incredible price in a process known as “blockbusting.”

The chance to have a bigger home in a safer neighborhood at a cheaper price proved too tempting for many, as Father Clore witnessed the “bulldozing” of the parish community at St. Francis de Sales.

“What happened after 1967 really accelerated ‘white flight,'” Father Clore said. “The population at de Sales really diminished in the five to 10 years after the uprising. There were African-American Catholics who moved into the neighborhood, became parishioners and sent their kids to the school, but white families started leaving.”

The changing demographics of the neighborhood creating a funding gap for many inner-city parishes and schools. It wasn’t long after the riots that Father Clore noticed church attendance at St. Francis de Sales dropping by the hundreds.

In an era when Catholic schools were funded by parishioners, regardless of whether they had children in the schools, a drop in parishioners meant a drop in funding. The schools were forced to raise tuition, which in turn priced out many African-American families moving into the neighborhood.

The effects of the rebellion of 1967 reverberated throughout the Detroit archdiocese in the following years. A flight of white — and black — parishioners to the suburbs left many urban parishes on shaky financial footing, resulting in the closing and merging of parishes that left many black Catholics who stayed in the city behind.

“The main thing that reverberates today is the black community in Detroit feels like they don’t have a full voice in the Catholic Church,” said Leon Dixon, director of black Catholic ministries for the Archdiocese of Detroit.

“We’ve had periods where they feel they had a voice, but not particularly a full voice. Whether we agree or disagree why our churches closed, a great number of African-Americans’ churches closed since 1967, and it’s left a sour taste in the mouths of many,” he said.

During a time of racial tension and social upheaval, the Catholic Church was in the midst of transformation itself with the Second Vatican Council and a Detroit archdiocesan synod.

Auxiliary Bishop Donald F. Hanchon was 20 when the 1967 riot happened, serving as a transitional deacon at St. Agnes Parish in Detroit while studying at Sacred Heart Seminary.

After seeing the effects of the social unrest on the neighborhood surrounding the parish, he resolved to work in the city, in parishes with poorer, African-American parishioners.

“It took five, 10 years for the dust to settle,” Bishop Hanchon said. “And by then the demographics of many of the parishes in the city had already changed.”

Fifty years removed from 1967, the effects of the riot or rebellion — whatever people choose to call it — still impact the Catholic Church in Detroit.

Many who lived through 1967 have their own stories to tell, grievances to bear and injustices they’ve witnessed as the church looks to move forward, but never forgetting what happened then.

As Archbishop Allen H. Vigneron urges the church in southeast Michigan to begin a new chapter to “Unleash the Gospel,” 1967 will remain a watershed moment in the local church’s history — one that will always be a part of, but not necessarily define, the church as it seeks to bring the Gospel to the city of Detroit.

“Detroit has always required people of hope getting their hands dirty to give others hope,” Bishop Hanchon said. “As a Detroiter, I feel I’m the inheritor of a wonderful tradition that goes beyond the Catholic Church.”

The purpose of remembering historical events isn’t to bring up old wounds, but to recall lessons from the past.

“It’s a good thing in our day to put Jesus at the center and ask, ‘What would Jesus do if he were in Detroit?'” Bishop Hanchon said. “You have to agree: He wants us together as brothers and sisters. That’s why 50 years after the riot, I can remember those images vividly. The smell in the air, the music of the day, the energy of the people. But I like to remember with hope.”

NEXT: Ex-priest leaves prison after serving his sentence for child sex abuse